(RNS) — Former Joint Chiefs of Staff Chairman Colin Powell, known as a four-star general and as a onetime secretary of state, was remembered at his funeral at the Washington National Cathedral Friday (Nov. 5) as a man of the Episcopal faith.

Longtime colleague and friend Richard Armitage, who served as deputy secretary of state under Powell, recalled how their regular 7 a.m. morning calls shifted to 9:30 on Sunday mornings, after his supervisor had returned from church.

Powell, who died Oct. 18 from COVID-19 complications, was honored at a nearly two-hour private ceremony. Hundreds of people gathered under the cathedral’s neo-Gothic arches, including President Biden and two former presidents, Barack Obama and George W. Bush, and their wives, and former Secretary of State and first lady Hillary Rodham Clinton.

“With faith in Jesus Christ, we receive the body of our brother Colin Luther Powell for burial,” said Episcopal Church Presiding Bishop Michael Curry, who met the general’s casket at the doors of the cathedral with Bishop Mariann Edgar Budde, leader of the Episcopal Diocese of Washington.

Some family members of Powell, 84, had key roles in the service that mixed the high church liturgy of the cathedral with the military precision of uniformed service members bearing Powell’s coffin and escorting his family.

His son, former Federal Communications Chairman Michael K. Powell, gave a tribute, along with Armitage and former Secretary of State Madeleine Albright, who preceded Powell in that position. His daughter, Annemarie Powell Lyons, read from the Hebrew Bible’s Book of Micah: “And what does the Lord require of you but to do justice, and to love kindness, and to walk humbly with your God?” 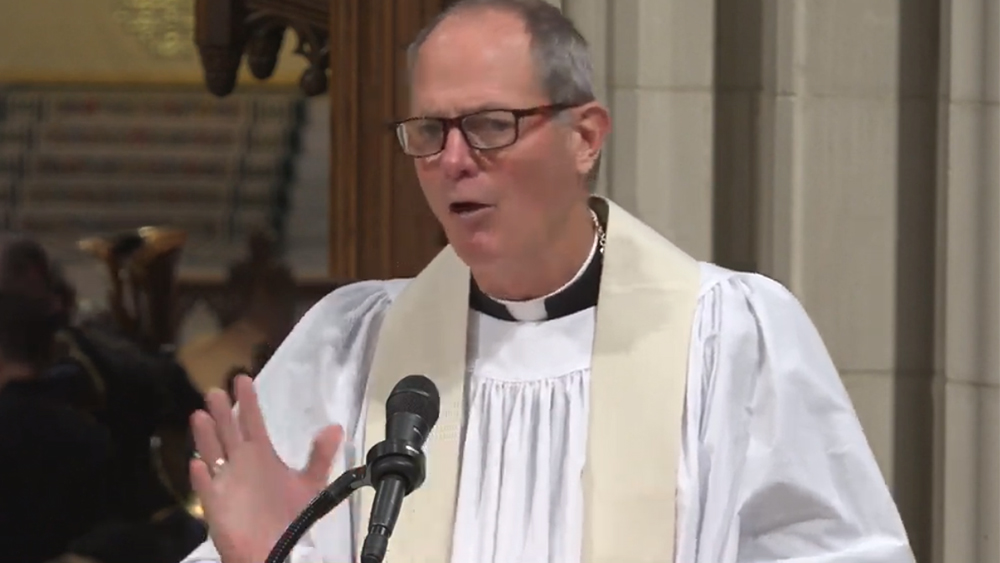 The Rev. Stuart A. Kenworthy speaks during the funeral for Colin Powell at the Washington National Cathedral, in Washington, Friday, Nov. 5, 2021. Video screengrab

The Rev. Stuart A. Kenworthy drew on that Scripture as he spoke of Powell’s faith.

“Colin knew his God through all his years,” said Kenworthy in his homily, a role the former Army National Guard chaplain also played at the 2016 funeral of former first lady Nancy Reagan. “His faith was of first importance, and his life was marked by those words of the Prophet Micah.”

He also encouraged those remembering Powell to embrace their Christian faith.

“God raised Jesus so that you and I might share in his resurrection, and if you turn to him and accept him in faith, he will come into you and raise you into that new and eternal life now,” Kenworthy preached. “Just as he has for your beloved Colin, who now stands upon another shore and in a greater light, with that multitude of saints that no mortal can number.”

Prior to the homily, the Rev. Joshua D. Walters, rector of the Powell family’s church in McLean, Virginia, read words of Jesus from the Gospel of John: “Do not let your hearts be troubled. Believe in God, believe also in me.”

In an earlier statement issued after Powell’s death, Curry noted Powell was a lifelong Episcopalian.

“I pray for his family and all his many loved ones, and I give thanks for his model of integrity, faithful service to our nation and his witness to the impact of a quiet, dignified faith in public life,” the presiding bishop said at the time. “He cared about people deeply. He served his country and humanity nobly. He loved his family and his God unswervingly.” Though not generally known for his ties to religion, Powell was noted for comments he once made about then-Senator Obama’s faith.

Obama, in a statement released on the day of Powell’s death, spoke of his deep appreciation of Powell’s endorsement of his presidential candidacy when the general had been affiliated with past Republican administrations.

“At a time when conspiracy theories were swirling, with some questioning my faith, General Powell took the opportunity to get to the heart of the matter in a way only he could,” said Obama in the statement, referring to rumors that he was a Muslim.

At the time, Powell said, “The correct answer is, he is not a Muslim; he’s a Christian.”

Powell also was among the top picks of likely voters who were religious and considering potential vice presidents when the then-senator was seeking the presidency in 2008.

But Armitage and other speakers mostly put politics aside as they recalled the man who was their friend, family member or colleague.

The former deputy secretary of state noted he and Powell had different preferences for hymns. Armitage recited the final verse of “Rough Side of the Mountain,” which speaks of standing “before God’s throne” when the race of life has concluded.

“Be real quiet,” Armitage told the congregation. “Listen real carefully. And you might hear our savior say, ‘Colin, welcome home. And here’s your starry crown.’”

This story has been updated to correct Powell’s secretary role. He was a secretary of state.