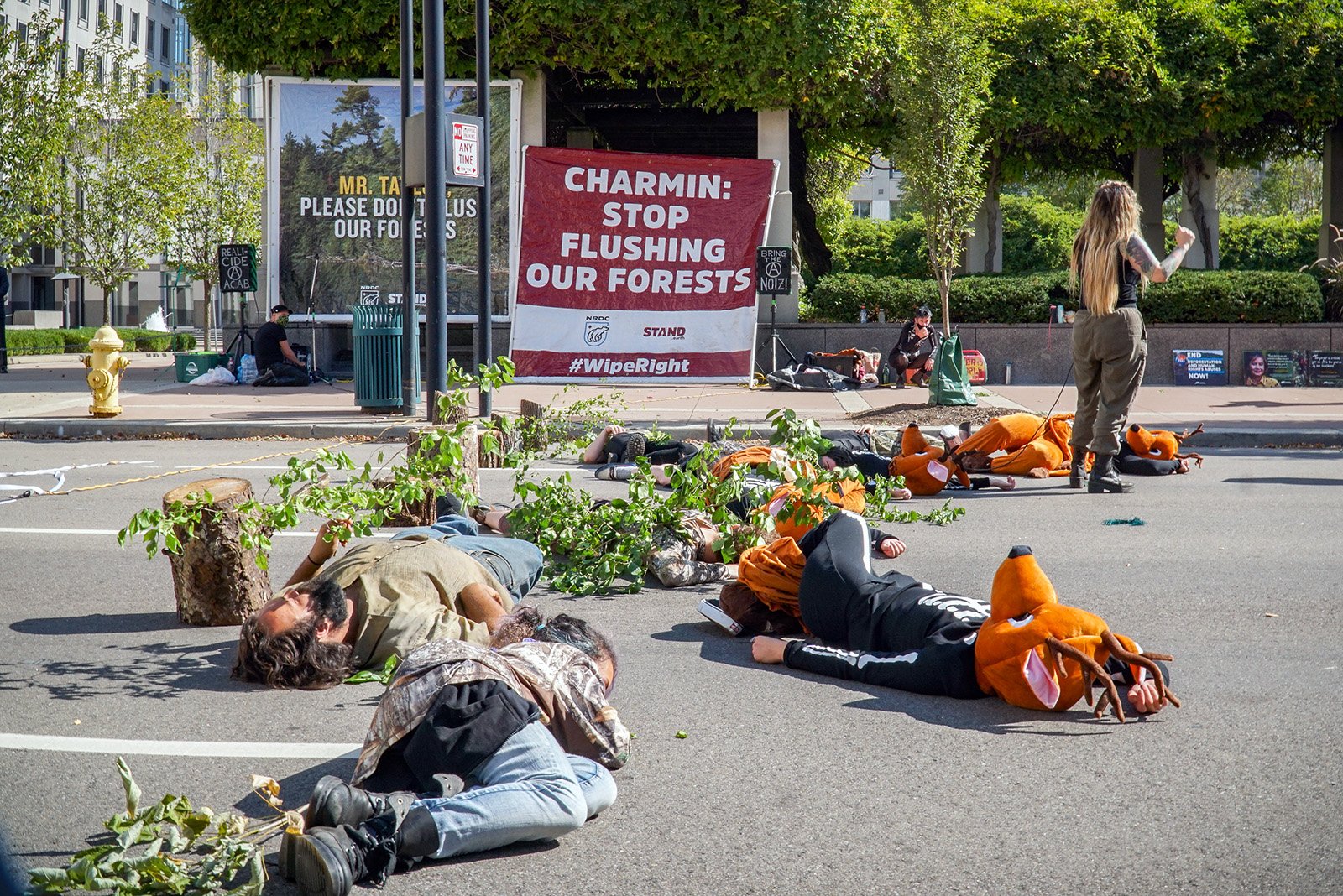 Activists demonstrate against alleged deforestation in the Procter & Gamble supply chain, outside company headquarters in Cincinnati, on Oct. 12, 2021. Photo courtesy of Tina Gutierrez/Stand.earth

CINCINNATI (RNS) — Mitchell Lands couldn’t make the trip south from Canada, where he lives on the traditional lands of the Migisi Sahgaigan, or Eagle Lake First Nation, in the province of Ontario. But Lands’ voice echoed in early October outside the concrete and glass headquarters of Procter & Gamble, the world’s largest consumer goods company, as he described seeing trees chopped down all the way to the shores of Eagle Lake.

“The forest is under attack,” Lands told a crowd of demonstrators in Cincinnati, in a recorded speech. “They’re cutting all the trees around where we live.”

He went on to explain that while logging companies clear-cut the forests near his home, rising water levels caused by deforestation threatened the tribe’s harvesting of wild rice, a sacred food. Procter & Gamble has denied that its suppliers are logging in the area, but the accusations are not new.

For decades, Indigenous people have pressured P&G to address the deforestation in its supply chain. Boreal forests in Canada, activists say, are being cut down to manufacture the company’s Charmin toilet paper, while rainforests in Indonesia and Malaysia are converted into palm oil plantations to supply products such as Head & Shoulders shampoo. 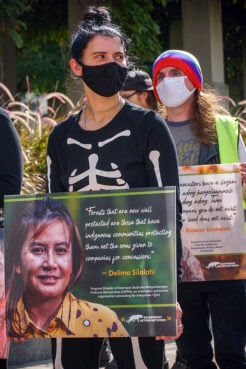 But last month’s demonstration shows how Indigenous spirituality — and, they say, their spiritual rights — are intricately connected to a host of climate, economic, historical and political issues going back centuries, and how environmental organizations such as Stand.earth, the Natural Resources Defense Council and Rainforest Action Network are teaming up with Indigenous people as concerns over climate change and deforestation grow.

Other faith leaders are also joining the fight. Christian, Jewish and Native American activists and clergy in the U.S. have increasingly offered their Canadian counterparts support. Last year, a group of Cincinnati faith leaders sent an open letter to Procter & Gamble, urging the company to address climate change and biodiversity loss as a “moral and spiritual imperative.”

“They are our relatives, as Indigenous people, and when they are affected, we’re affected,” said Jheri Neri, the director of the Greater Cincinnati Native American Coalition and one of the signers of the letter. “We are connected spiritually … and so it is our duty to to step forward and protect those communities when they’re being affected, whether they’re in Canada or whether they’re in New Mexico or North Dakota or Minnesota.”

Indigenous communities such as Canada’s First Nations and Indonesia’s Orang Rimba say they depend on the forests to sustain traditional ways of life that are inseparable from their spiritual beliefs, which they say are intricately bound with their hunting and lifestyle. A September report from Stand.earth found that logging by some P&G suppliers threatens caribou habitat in Canada. It also reported that the logging tramples several First Nations’ treaty rights.

Procter & Gamble responded that it has a grievance process to identify suppliers that are not complying with its sourcing policies and that it has reduced or stopped sourcing wood pulp from companies that threatened caribou habitat or did not follow sustainable forestry practices. The company said it is also working toward purchasing 100% of its wood pulp from suppliers certified by the Forest Stewardship Council, a nonprofit that promotes responsible forest management. (That program, however, has itself been accused of not doing enough to protect forests.)

“We agree that responsible sourcing is an important issue for not just our business, but more importantly, for the environment and people who depend on it,” a P&G spokeswoman, Tonia Elrod, said in a statement. 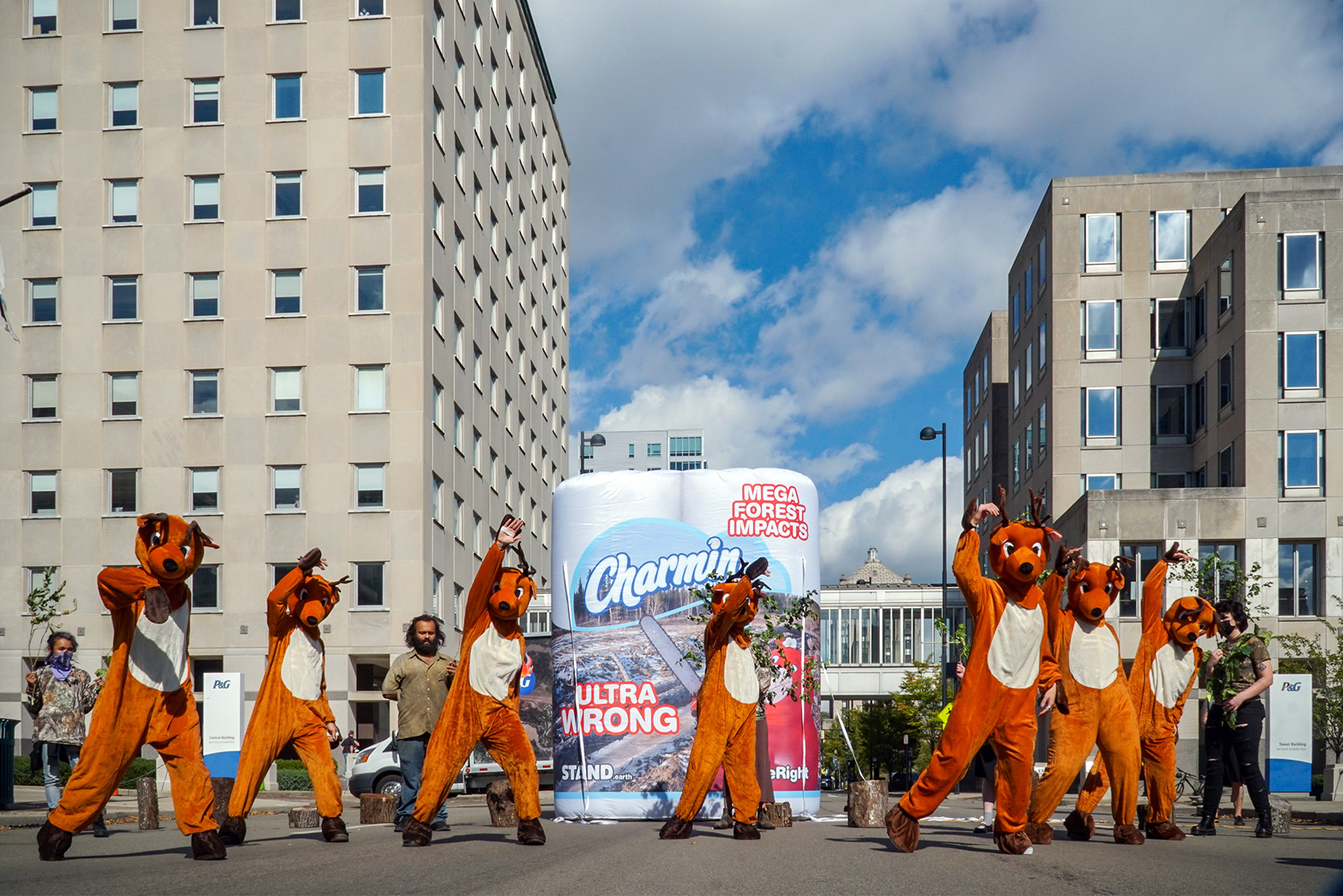 But activists say these changes are cosmetic, and they want the company to do more to crack down on violations. Faith communities are a key part of the effort to convince them to do so. Jen Mendoza, who led Stand.earth’s outreach efforts to faith communities in Ohio, has reached out to religious leaders in Cincinnati who could influence the company on a local level.

“Every religious text has very specific strategic instructions for us about how we care for the land,” Mendoza said. “So it wasn’t hard to really make those connections for folks, and especially, I think, in the face of the climate chaos that we’re now witnessing.”

The Rev. Paula Jackson, rector of the Episcopal Church of Our Savior in Cincinnati, was one of those Mendoza contacted. Jackson said environmental issues had been important to her since “the first Earth Day,” in 1969 — a viewpoint shared by her denomination, which has officially recognized human-caused climate change and called on church bodies to divest from fossil fuels.

At the General Convention of the Episcopal Church in 2018, Jackson said, she heard delegates from Alaska describe how warming temperatures and resource extraction were already affecting Indigenous livelihoods and cultural practices. When activists from Stand.earth approached her a few years later about sending a letter to Procter & Gamble, she signed on.

“For me, it’s always been connected to my faith, because I want there to be a future on this planet for other people besides myself,” Jackson told Religion News Service. “And I believe in our connectedness, as human beings, with each other, and our mutual responsibility for each other. And that, as creatures in the image of God, we are responsible to care for and preserve the Earth, not to trash and destroy the Earth.” 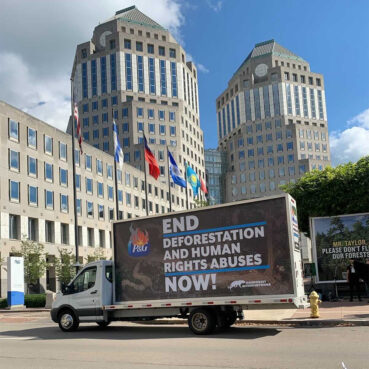 A mobile billboard is parked in front of Procter & Gamble headquarters during a demonstration in Cincinnati. Photo courtesy of Stand.earth

Local activism like Jackson’s is rising to the national level, where connections between religion and the environment are becoming more overt; in June, more than 3,400 faith leaders signed a letter urging Congress to act on climate change and develop climate-ready infrastructure.

Many of the faith-based climate activists met or solidified friendships at protests against the Dakota Access pipeline in 2016, when protection of sacred sites was a crucial argument against the pipeline’s construction. Representatives from the Episcopal Church, the Presbyterian Church (USA) and United Church of Christ, among others, came to the protest camps in North Dakota to show solidarity with the demonstrators, while others joined the prayer groups that were part of Standing Rock Sioux’s resistance efforts.

Mendoza said it was the first time she saw secular environmental groups come together with people whose ideas about protecting the environment were “rooted in a spiritual practice.”

“The environmental movement since Standing Rock has really put a lot of emphasis on standing with the impacted communities first, and learning how to be better accomplices,” Mendoza said. “And through that process, organically learning that there is a spiritual component here.”

Indigenous spirituality for many North American cultures is intimately tied in with the land, which native peoples see as an extension of themselves. Everywhere Indigenous people live their lives — the sites where they build their houses, harvest wild rice, hunt and collect traditional medicine — are spiritual sites as well.

“Where they live, where they eat, where they die, where they bury their dead and where their children are born, all of that is holy, because that is the relationship that they have,” Neri said. “And that is something that people can’t understand. Because they’re so used to separating that relationship and putting it in boxes.”

That makes protecting the land an issue of religious freedom, Neri said, and one that should motivate Procter & Gamble to uphold the promises it’s made to obtain consent from Indigenous people.

So far the company has missed the mark, according to Miles Pitchenese, another member of Eagle Lake First Nation.

“Everything that makes us up as people comes from the land,” Pitchenese told Stand.earth in the organization’s September report. “Our language comes from the land. We go out there to look for answers. The trees, rocks, water have spirits, too, and understand. We have to stop and listen and understand, and we have to make decisions not only for us but also our great great grandchildren.” 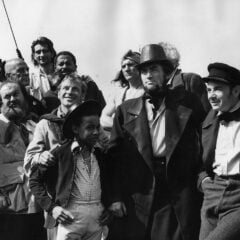