LOS ANGELES (RNS) — Students at Loyola Marymount University — a private Catholic school founded by the Jesuit and Marymount orders — are protesting against the university after it announced it may be amending its policies surrounding student-organized activities.

“Moving forward, LMU is reexamining and revising its policies and practices regarding student-organized activities to ensure stronger alignment with our mission,” according to a statement by the school.

This announcement comes after LMU Women in Politics, a registered student group that fights “for women’s equality on and off campus,” organized an on-campus fundraiser for Planned Parenthood that some students and alumni called an “egregious violation” of the university’s “Catholic identity.”

About a dozen LMU students gathered Wednesday (Nov. 17) for a protest outside the university, with many highlighting that Planned Parenthood offers much more than just abortion. They held signs that read “Keep your ROSARIES off my OVARIES” and “LMU cares more about their donors than their students.”

In a statement, LMU Women in Politics said it had no regrets about hosting the fundraiser, adding: “we will continue fighting for reproductive health care on and off campus.

”We will not accept any changes to university policy that restricts our freedom of speech and expression.”

A petition posted on RenewLMU, which describes itself as “an alliance of students, alumni, faculty, donors, and other LMU supporters who seek to strengthen LMU’s Catholic mission and identity,” said choosing Planned Parenthood as a recipient for fundraising on a Catholic campus was “decidedly divisive.” Planned Parenthood offers a range of reproductive health care services, including abortion, which the United States Conference of Catholic Bishops describes as “gravely contrary to the moral law.”

Los Angeles Archdiocese José H. Gomez, who was in contact with Loyola Marymount officials, said in a statement he was disappointed by the event. “Respect for the sanctity and dignity of all human life is central to Catholic identity and must be a core commitment in Catholic higher education,” said Gomez, who is president of the USCCB.

Nicole Baxley, a senior at LMU who organized the protest on Wednesday, said the demonstration was in reaction to the way the university handled the pushback about the Planned Parenthood fundraiser. She said it’s important to raise awareness of reproductive health issues “because everybody is going to be affected by it.”

“It doesn’t matter what your religion is. I’m Buddhist, but I go here. It’s going to affect everybody and everyone,” Baxley said.

Baxley said it’s important to have “reproductive health on the forefront,” especially because “hookup culture” is so normalized on college campuses. 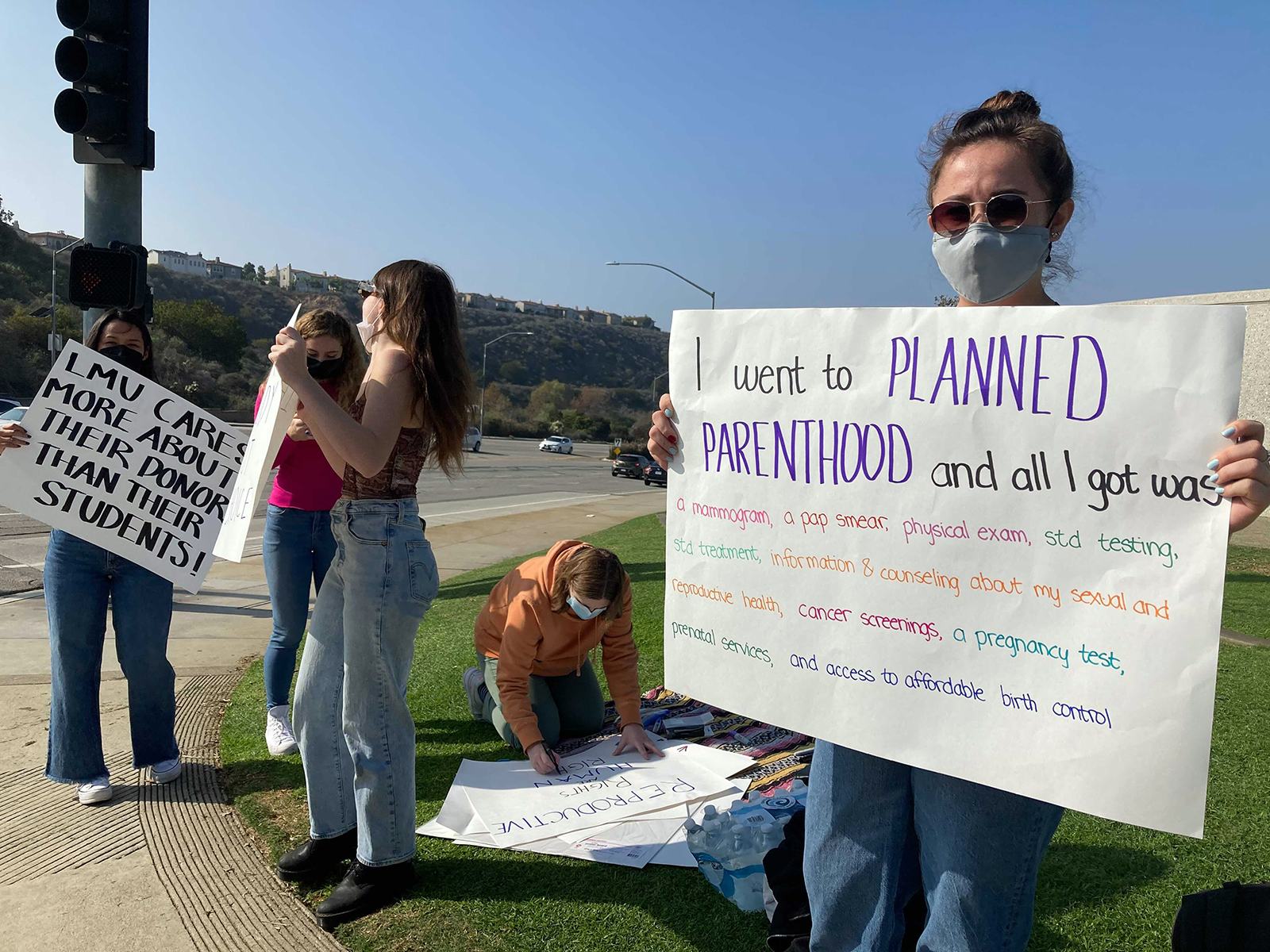 Nicole Baxley, right, a senior at Loyola Marymount University, organized a protest Nov. 17, 2021, in reaction to the university’s handling of the backlash against a Planned Parenthood fundraiser hosted on campus by the LMU Women in Politics group. RNS photo by Alejandra Molina

Students at the demonstration also said the university doesn’t make it completely clear what it does and doesn’t offer in terms of reproductive health care.

“With no birth control provided on campus, services like Planned Parenthood are even more necessary,” the LMU Women in Politics statement said.

University officials sent a statement to Religion News Service on Wednesday but did not give details about the school’s policy on reproductive health care on campus.

“LMU plans to review its policies, a process that will include opportunities for input and open discussion from the LMU community, including students,” the school said in the statement to RNS.

“The university reaffirms its commitment to free speech and freedom of expression, supported by its mission and evidenced by its history of supporting students and the academic community, and embracing the complexities that result from free and honest discourse,” it added.

Ellie Lewis, a Loyola Marymount student, was at the protest and said, “The university shouldn’t be reconsidering the way that they handle fundraisers and events just because a group of pro-life people didn’t agree with the Planned Parenthood fundraiser.”

To Elena Sandoval, a junior at Loyola Marymount, the university’s statement in the wake of the fundraiser “made it clear they don’t support women’s health and reproductive rights.”

Sandoval, who was raised Catholic but is not religious, said Loyola Marymount feels like an “unsafe campus to be on as a woman.”

“You don’t want to feel like you can’t get the help you need on campus if you’re in a situation where you really need someone to talk to,” Sandoval said.