WASHINGTON (RNS) — Hundreds of evangelical Christians gathered in person at the Museum of the Bible and online across the country on Wednesday (Nov. 17) to listen to stories of racism, as clergy urged participation in a new initiative for racial unity.

Bishop Kenneth Ulmer of California recalled how just a couple of years ago, when he was 71, a hurried Mercedes-driving woman saw the Black clergyman outside a posh Dallas hotel, handed him her keys and said, “Take care of my car, boy.” He credited God for transforming his heart after the incident and called himself a “recovering racist.”

Otoniel Font, a Puerto Rican pastor, reminded the audience not all Latino people are Mexicans and not all Black people are African American: “We must educate ourselves.”

Dennis Rouse, the white lead pastor of an Atlanta-area church with congregants of 145 different nationalities, said it’s possible to build a multicultural church if “you don’t love people of just one race.”

The “Let’s Talk” initiative was hosted by Bishop Derek Grier, a northern Virginia pastor who asked clergy at the kickoff to agree to a “Statement of Change,” financially support the initiative and meet monthly via Zoom starting Dec. 7. The monthly calls will offer more opportunities for participants to share in small groups the kinds of stories heard Wednesday under the crystal lights of the museum’s ballroom.

“Tonight, we are going to step on the third rail together, the place where angels fear to tread,” he said. “We’re going to talk about race and religion.” 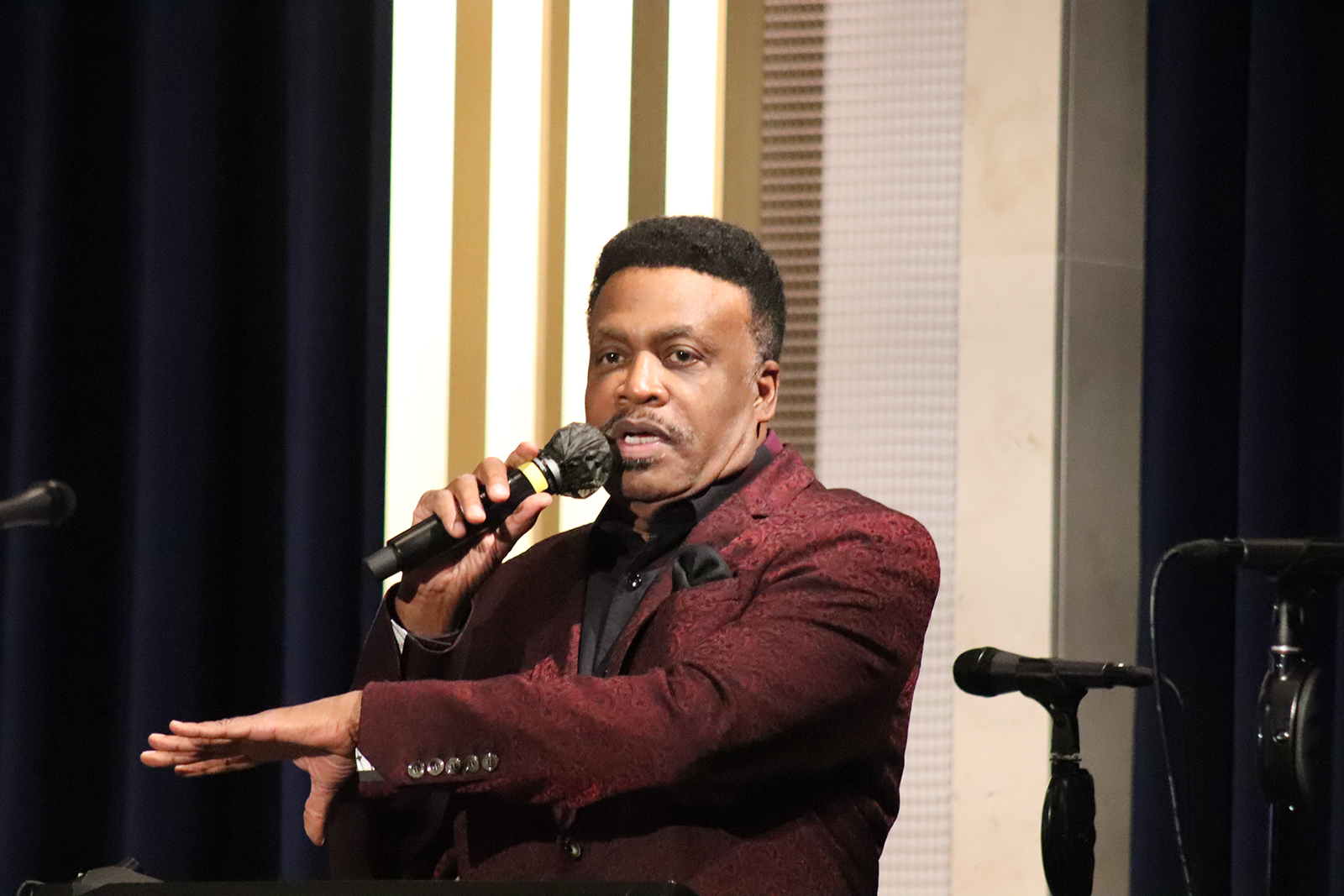 Bishop Kenneth Ulmer speaks during the “Let’s Talk” kickoff event at the Museum of the Bible, Nov. 17, 2021, in Washington. RNS photo by Adelle M. Banks

Grier said he believes God prompted him to take action after the Jan. 6 violence at the U.S. Capitol — just blocks away from their location — to try to bridge divides in the country.

He read portions of the Statement of Change, which noted the Bible’s call for humility, cited the three-fifths clause of the U.S. Constitution that normalized slavery, and defined racism as “inconsistent with the heart of the Holy Spirit” and scriptural teaching.

“Because men and women are made in the image of God, every person, regardless of race, religion, color, culture, class, sex, or age, has an intrinsic dignity and should be respected and served, not exploited,” the statement reads in part. “We believe both the spirit and clear moral imperatives of scripture require the Christian community to lead the way in defeating racial bigotry.”

Grier also shared, via video, some of his personal experiences with racism. When he was a child, a white female classmate informed him her father said he would beat her if she kept walking home with Grier, her Black friend. As an adult, he saw his son initially denied access to a school’s gifted program until Grier asked a teacher about his child’s scores and learned they were higher than most of the students who already were in the program. 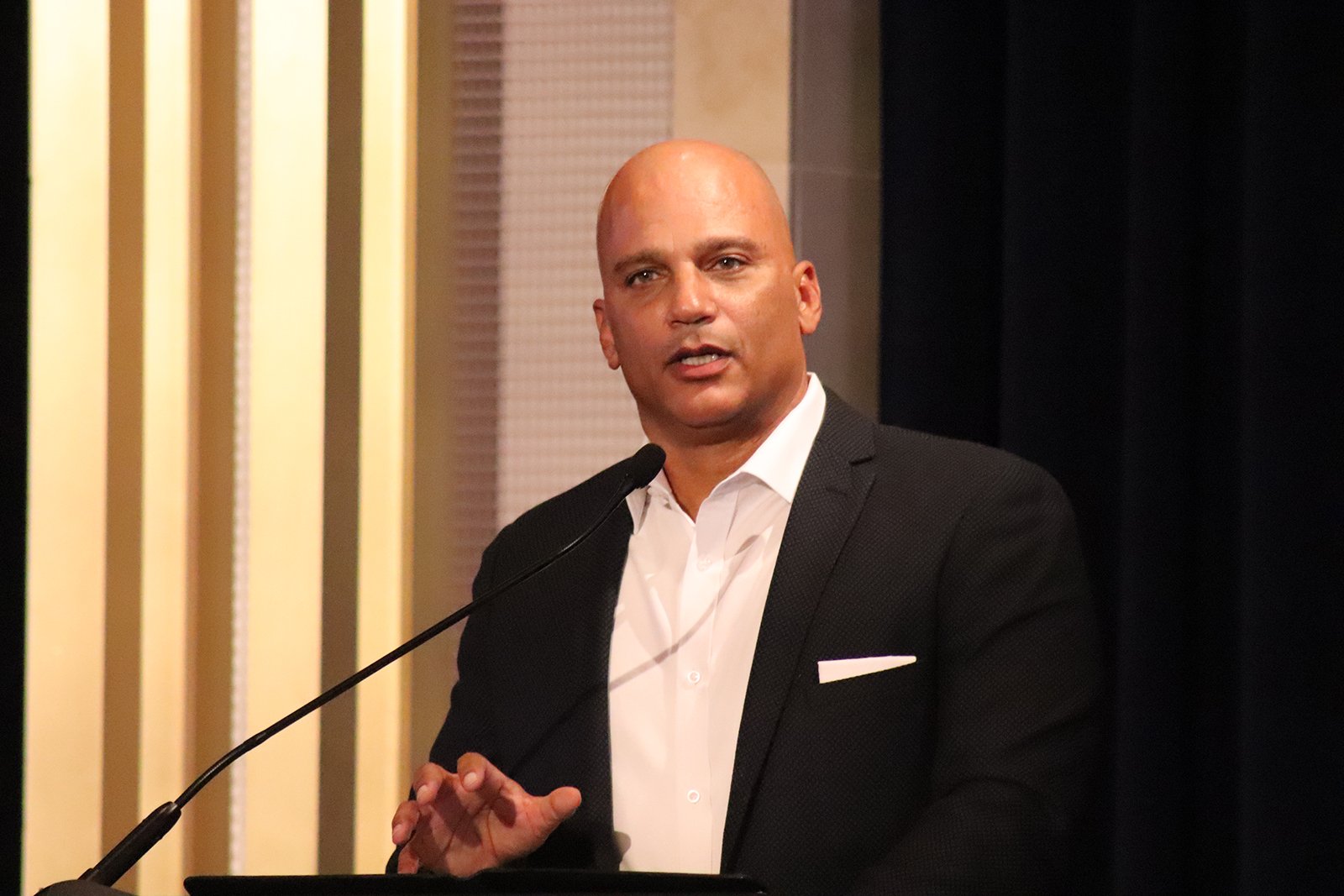 Online speakers included Senate Chaplain Barry Black, who recited a prayer giving thanks for “all who seek to build bridges rather than walls,” and Christian Broadcasting Network President Gordon Robertson, who urged listeners to “have heaven here on earth” by working toward racial equality in America’s churches.

Speakers of different racial/ethnic groups recalled personal experiences with school busing efforts and being (or seeing) the few people of color in tense classrooms. Some told of the mistreatment of interracial couples who were not accepted in Christian circles. More than one remembered being called the N-word as a turning point in their lives.

Frank Santora, founding pastor of a New York megachurch, used his in-person moments at the microphone to offer an apology.

“I want to, on behalf of people that look like me, apologize to people who don’t look like me, for all of the injustices that have happened for so many years and continue to do so,” said the white minister. “I want you to know I hope, I pray that that can begin the healing process in some hearts.” 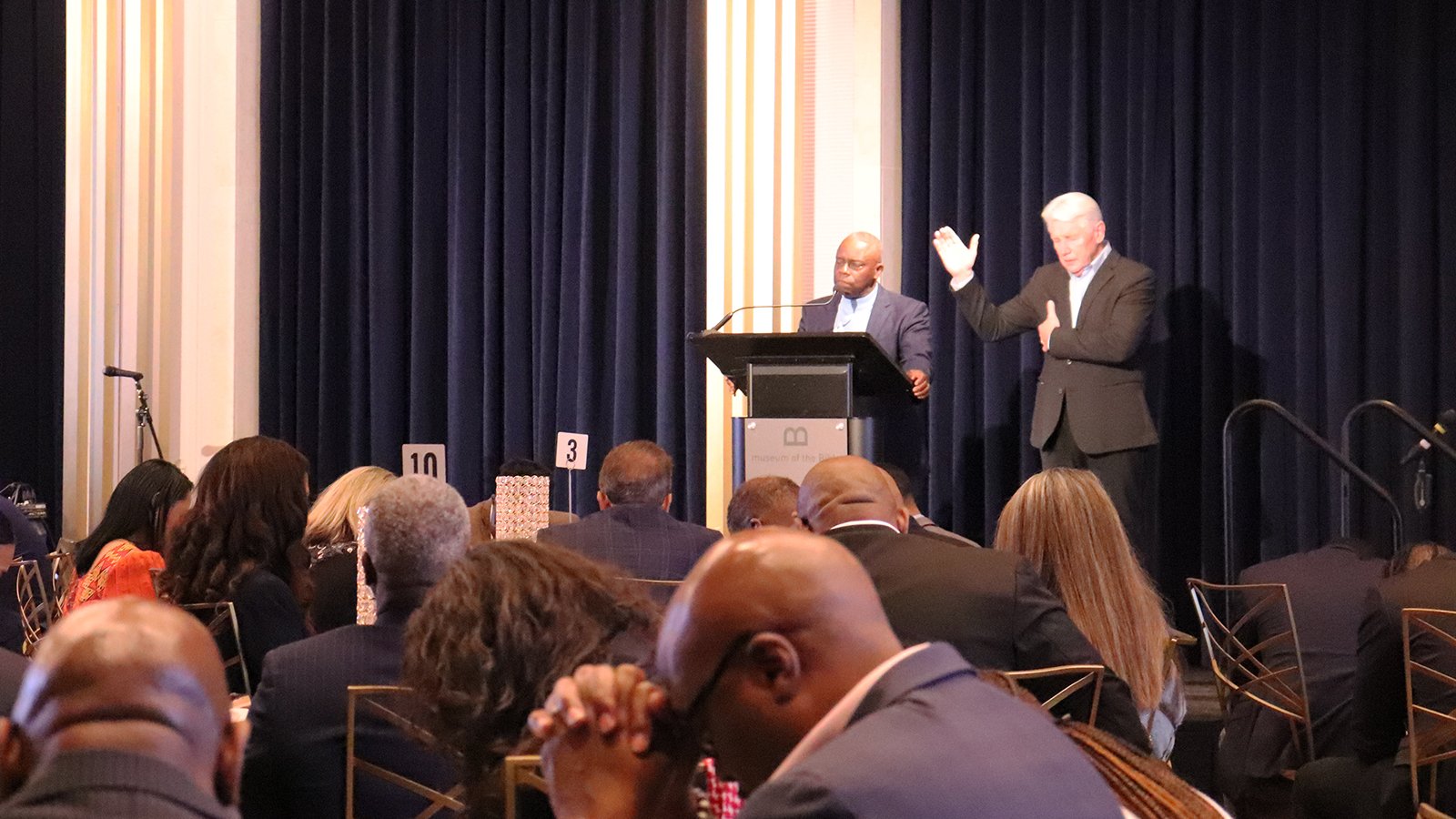 Bishop Courtney McBath, at podium, and Pastor Richard Hilton pray together over the “Let’s Talk” kickoff event at the Museum of the Bible, Nov. 17, 2021, in Washington. RNS photo by Adelle M. Banks

In the wake of last year’s murder of George Floyd, a Black man, under the knee of a white Minneapolis police officer, and more recently the Jan. 6 insurrection, there have been numerous meetings, speeches and webinars that have sought to address how to bridge religious and racial divides in the country.

World Vision U.S., an evangelical Christian humanitarian organization, recently completed what Michael Chitwood, executive director of its church engagement team, called “a one-year mutual learning journey towards a Biblical understanding of what it means to pursue racial justice.” He recently told Religion News Service that 350 to 400 individuals continued to attend monthly sessions during the summer.

Grier hopes for hundreds of attendees for his initiative. The kickoff featured a diverse, though predominantly African American, crowd — with about 175 in-person attendees and an additional 300 online.

Asked about the turnout at the museum, participants expressed hope for more diverse involvement as people learn about the plans of Grier and the speakers who served on an advisory team. 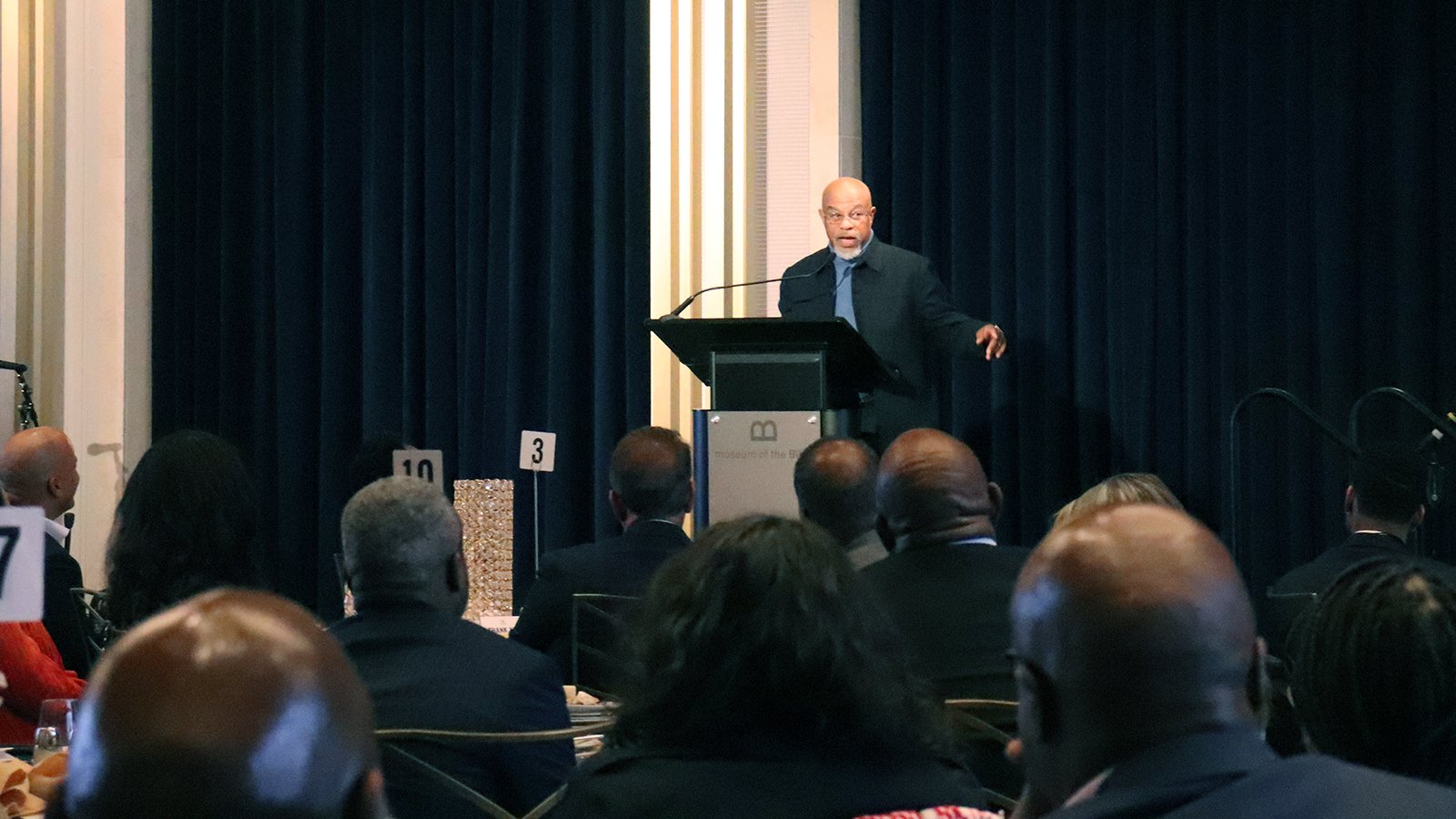 Maryland megachurch pastor John Jenkins spoke during the banquet about how he led his predominantly Black congregation to join Converge, a mostly white denomination, as a way “to try to teach the African American community that I lead that not all white people are devils” — a mindset, he said, of some of his older congregants who once were subjected to police fire hoses or dog attacks during the days of the civil rights movement.

“It’s hard to get white people to come to events like this; it’s very hard to get Anglos involved,” said Jenkins, who is chairman of the National Association of Evangelicals, after the event. “It would be great if Anglo churches did the same thing.”

Richard Hilton, the white founding pastor of a Tennessee church, said there were a range of people taking part in the kickoff online.

“I’ve been getting texts from pastors — white and Latino — that were watching online and couldn’t be here in D.C.,” he said after the event. “I think we just have to get the word out.”