(RNS) — The Puritans who prayed to God more than 400 years ago on Massachusetts’ shore cannot take sole credit for inventing the holiday we now call Thanksgiving. They share the idea with the Jewish sage Moses Maimonides.

In historian Nick Bunker’s 2010 book, “Making Haste From Babylon: The Mayflower Pilgrims and Their World,” he explains that as a separatist, William Bradford “did not care for prefabricated liturgy read from a book.” So when the Pilgrims landed in November 1620, Bradford consulted the commentary by Henry Ainsworth (1571-1622) that he had brought with him, “Annotations on the Five Books of Moses,” which included the Psalms.

Ainsworth, as a Christian Hebraist, was familiar with the work of the classical rabbis and of Maimonides. Ainsworth quoted the sage’s Mishneh Torah, based on a part of the Talmud called Berachot, or “Blessings”: “Rav Yehuda said that Rav said: Four must offer thanks to God with a thanks-offering and a special blessing. They are: Seafarers, those who walk in the desert, and one who was ill and recovered, and one who was incarcerated in prison and went out.”

The importance of a seafarer giving thanks in this text is attributed to Psalm 107, which tells in verses 23-31 of the difficulties of a sea journey and the thankfulness that ensues when the travelers are safe.

ARCHIVE: Who are you calling a Puritan?

Ainsworth quoted from Maimonides, saying, “And the manner of confessing and blessing is thus; He standeth among them and blesseth the Lord, the King eternal, that bounteously rewardeth good things unto sinners, etc.” According to Bunker, this Jewish prayer of thanksgiving became the “public confession of the goodness and majesty of God, exactly the kind that the Pilgrims performed at Provincetown.”

The formal festive observance that we imitate on Thanksgiving was not established by the Puritans till 1621, a year after they landed, but the more crucial Thanksgiving, the heartfelt one, might be the spontaneous public declaration of thanks by the seafarers who arrived safely. Jews follow this practice today, making a public blessing in the synagogue any time they have been through a dangerous situation.

This Thanksgiving we may not feel as if our own dangerous journey is quite over. The global pandemic that began more than 20 months ago still shows no sign of ending its impact, long after vaccines have become available. As we gather with family or for a Friendsgiving, we may feel beleaguered by COVID-19’s unyielding grip on our lives, not to mention its related inflation and supply chain difficulties. Meanwhile, the just-ended COP26 conference reminded us that climate change is looming, and our democracy faces threats from voter suppression and an increasingly entitled right wing in this country.

When there is so much for which we are manifestly and patently not at all thankful, we can look, as Bradford did, to Jewish wisdom.

We humans, with our limited abilities and understanding of the larger picture of the world, may not always know what is bad and what is good. Or, in the words of the Talmud in Taanit 8b, “Rabbi Yitzḥak said: A blessing is found only in an object that is hidden from the eye.”

In other words, we can’t always understand what is a blessing and what a curse. We don’t know what our response to a tragedy will be. We can’t always immediately see it is possible for constructive opportunities that come out of a negative situation.

Melissa Glaser, in her book “Healing a Community,” about her work in Newtown, Connecticut, in the aftermath of the school shooting there in December 2012, defined the concept of post- traumatic growth as “the belief that you can also achieve personal growth, encounter new opportunities, develop closer relationships, gain a stronger appreciation for life, and deepen your spiritual core.”

In reckoning the pandemic’s devastation, we count the number of unnecessary deaths and countless economic and social effects. But not least is the harm it has caused to the nation’s mental health, particularly of children and adolescents who have been suffering greatly from social isolation. But psychologist Michele Nealon wrote last month on World Mental Health Day, the pandemic “accelerated positive momentum in our communities to raise awareness about these issues and increased accessibility to crucial support and services for those affected.”

Nealon goes on to say that the scourge of COVID-19 has reduced the stigmatization of mental illness and woke many up to the racial disparity in mental health services. The pandemic’s wider effects may also lead in the long run to improvements in the U.S. public health system.

RELATED: Thanksgiving has always been about grief. Pass the mashed potatoes.

I’m not suggesting we merely match positive outcomes for every difficulty of this time; we could not. But it is important to understand that though the devastation of the pandemic cannot be reversed and should not be excused, there may also be positive responses that may grow from the sufferings of the moment. Few among us have been left untouched by the tragedy of this pandemic, yet we can all try to find ways to give thanks and to acknowledge that, though we have suffered and are suffering, we are capable of growth.

A recent work, “On Consolation” by Michael Ignatieff, says of the Psalms, from which Bradford read four centuries ago, “From knowing despair, the psalms teach us, we come to know what hope actually is, and it is the memory of despair that can make us fight so hard to live in hope.”

Surely a lesson the Puritans would approve of for all residents of the United States, then and now.

(Beth Kissileff is the co-editor of “Bound in the Bond of Life: Pittsburgh Writers Reflect on the Tree of Life Tragedy” and author of the novel “Questioning Return.” She is grateful to Rabbi Daniel Yolkut and his 2017 source sheet ”Psalm for Thanksgiving Day” for the information about Nick Bunker’s book in this op-ed. The views expressed in this commentary do not necessarily reflect those of Religion News Service.) 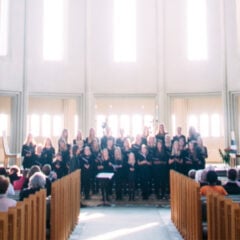 Martini Judaism
Reader: What do you think of responsive readings? Congregation: Yawn
Follow us on Facebook!
Submit your photos to RNS