(RNS) — A painting of Jesus and his mother, Mary, in which Jesus is seen by many to be painted in the likeness of George Floyd in response to his agonizing death, was stolen from Catholic University of America Columbus Law School this week after a spate of conservative media attention and death threats directed at the artist.

“Mama,” by St. Louis artist Kelly Latimore, shows a Black Virgin Mary cradling Jesus’ dead body after his Crucifixion in a style known as a Pietà. It was discovered missing Wednesday morning (Nov. 24) from its place outside the Washington law school’s Mary Mirror of Justice Chapel. School officials have since replaced it with a smaller version.

Latimore said his depiction has drawn criticism ever since he created it last year, but things escalated this week after the Daily Signal, a website owned by the conservative Heritage Foundation think tank, published a story about the painting Tuesday afternoon. An online petition, purportedly written by CUA students, advocating for the painting’s removal began circulating as well and accrued more than 3,600 signatures.

“I think, unfortunately, racism is part of a lot of it, especially death threats (that include) derogatory remarks about George Floyd specifically,” he said, adding that some of the threats took issue with any depiction of Jesus as Black.

“Really white supremacist, racist stuff — which, theologically, is what racism is: a complete denial of the incarnation of Christ,” he said.

Latimore has said the painting is meant to “mourn” Floyd but explained that he often answers the question “Is it George Floyd or Jesus?” with a simple “yes.”

He said an image of “a Black mother and a son who was unjustly murdered by the state” was true to the “nature of the personhood of Christ.”

“I believe Christ is in that image, just as much as it would be in ‘normal’ Pietà — the European version of Christ,” he said. “In Matthew’s Gospel, Jesus asks us to find him in all people, especially those who suffer as George Floyd did.”

Officials at CUA were more hesitant to draw direct associations with Floyd in a statement issued earlier this week.

“There are those who would like to see George Floyd as the male figure in the icon,” the statement read. “That is not how we read it. The image represents to our community a good-faith attempt to include religious imagery on campus that reflects the universality of the Catholic Church.”

Depictions of Jesus have varied wildly throughout history, but some recent iterations that raise racial justice issues have caused controversy. When the Pontifical Academy of Life, an official Vatican think tank, tweeted a photo of Michelangelo’s iconic Pietà featuring a Black Jesus in September 2020, some conservative Catholics criticized the move. 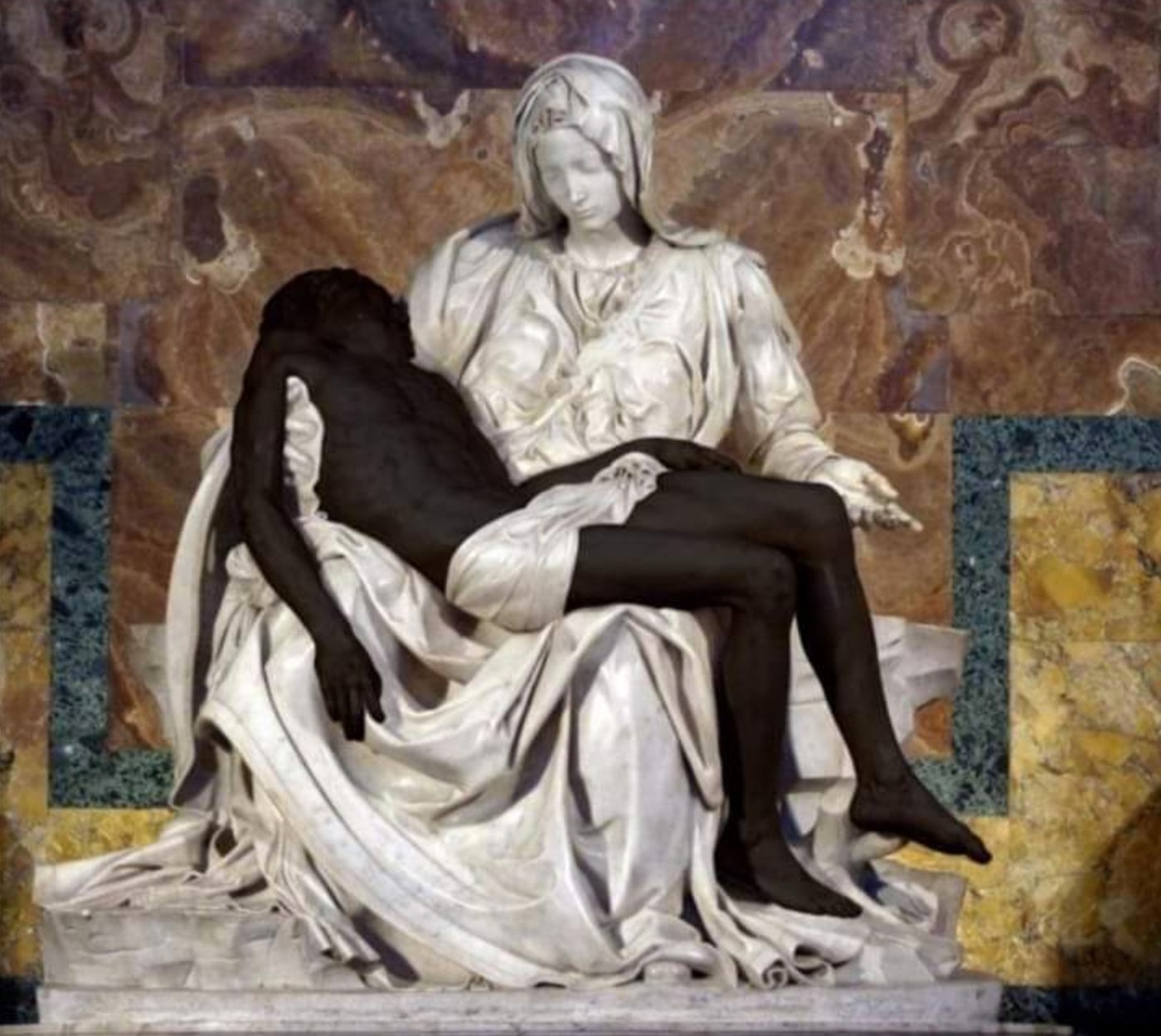 A depiction of the Pietà sculpture by Michelangelo with Jesus as Black. Image via Twitter/@PontAcadLife

The head of the academy, Archbishop Vincenzo Paglia, told Religion News Service that the image was inspired by a depiction of Michelangelo’s Pietà created by Italian sculptor Fabio Viale in 2015. Displayed in Milan during the height of an immigration debate in Europe, the statue, titled “Lucky Ehi,” replaced Michelangelo’s version of Jesus with a 22-year-old Christian Nigerian who fled his country to avoid persecution.

CUA President John Garvey said in a public letter that some of the comments sent to school officials about the painting were “offensive and racist,” although a school spokesperson said they have also received messages of support.

Garvey also noted the school has rebuffed requests to remove the image on its own, citing an existing “no cancellation” policy.

“We hope to continue to build on campus a culture that engages in thoughtful dialogue and debate, not the sort of bully tactics epitomized by this theft,” he wrote.

The original version of the painting resides at the Episcopal Church of the Holy Communion in St. Louis, and Missouri’s Episcopal bishop, the Rt. Rev. Deon Johnson, also owns a copy. Johnson defended the depiction in an interview with RNS, arguing that images of the divine are impressionistic by nature and that icons function as “a window into how we see ourselves and a picture of how we imagine heaven.”

“Nobody was running around taking pictures of Jesus,” said Johnson. “An icon is always how we imagine Jesus and these holy people we revere.”

Johnson, a Black man who has participated in racial justice demonstrations, said he doesn’t see depicting Floyd as Jesus to be “in any way sacrilegious.”

“If anything, it makes it more sacred, because here was a real person who became an image of Christ,” he said. “Why is the image of a Black man who was publicly lynched such a challenge to religious people?”

He added: “If ever there was an icon that we needed, it was an icon of those who have historically been pushed to the side to remind us about who we follow.”

As for Latimore, he said the theft and controversy surrounding it has only inspired him to create more art. He pointed to a story of a Kentucky-based artist who was asked by a local congregation to paint a mural of the biblical Jordan River. Instead, the artist painted the nearby Ohio River.

“In America, especially with images of Christ, we’re really looking too small. We’re not paying attention to what’s around us.”