(RNS) — The internet phenomenon known as fanfiction has actually been around, in one form or another, at least since the 1800s. The term refers to writings by fans of a particular work of fiction using the same themes or characters from the books they love — Jane Austen, Bram Stoker and Sir Arthur Conan Doyle to start, and, more recently, unauthorized adaptations of TV shows: “Supernatural” is among the most popular inspirations. Some fanfictions become mainstream works in their own right. “Fifty Shades of Grey” was originally a “Twilight” fanfic story published online.

These re-imaginings and many more appear on FanFiction.net, one of the most popular websites where writers discuss their favorite books, video games, shows and movies. Scroll down past Harry Potter (the No. 1 category), past Sherlock Holmes at No. 27, and you’ll hit an unexpected title — the Bible.

The only religious text to have its own category on the website, the section includes about 4,100 stories that range from notes about people’s interpretation of religious teachings to stories that fill out what little the Gospels say about Mary, Jesus’ mother.

Fanfic author The Righterzpen, who, like the other authors interviewed, gave only her internet handle, said most writers approach writing fanfiction for the Bible from a religious context, with Christianity being the most common faith viewpoint. “The stories that do the best, in the Bible section at least, tend to be creative writing story format; although I personally also get quite a bit of traffic on Bible studies,” she said. 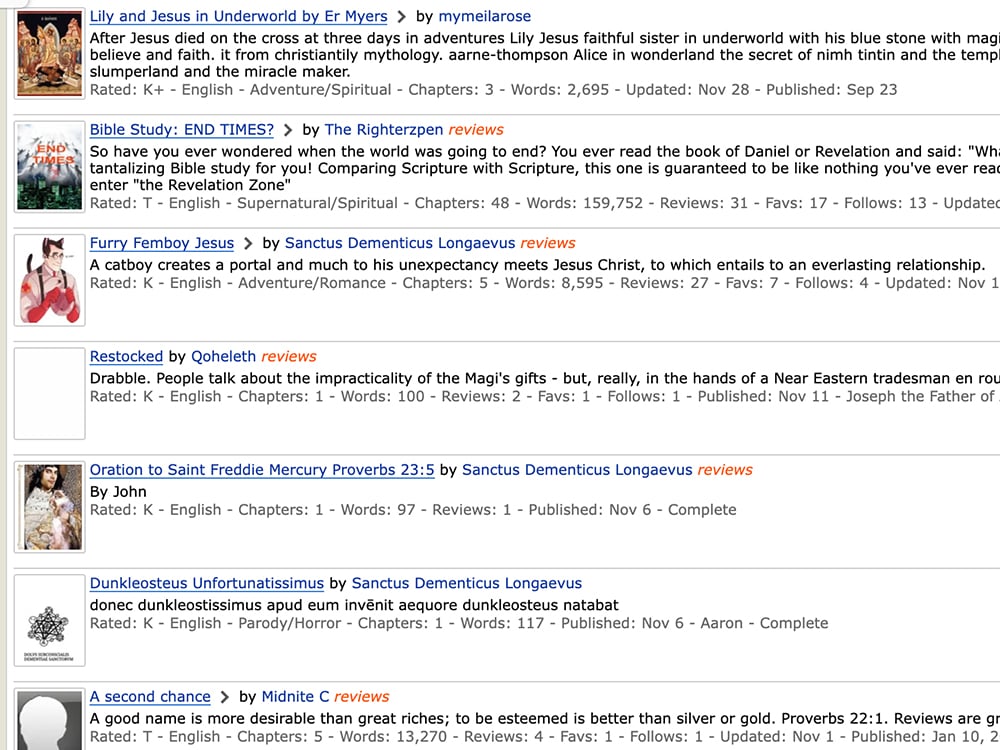 Recent entries on the fanfiction.net page for the Bible. Screengrab

Catholic contributor Innocentia999 calls herself conservative and anti-feminist in her bio on the website, and her anti-abortion ideologies are expressed in her poem “Children for Sacrifice.” She uses the medium, according to her bio, to share her love for God and advocate for children’s rights. She has also written poems and short stories on topics like child labor and child marriage.

In an interview with RNS, she said that “Bible fanfiction, I think, can be a great way, depending on what stories you decide to post, to express one’s self and one’s passion for Jesus Christ and the Old and New Testaments. The Bible can easily be called the greatest written work ever produced in human history.”

RELATED: New Mormon YA novel explores both faith and feminism

For other writers, the practice of writing fanfiction is less celebratory than corrective. FanFiction user Loveispatientloveiskind is a Messianic Jew. When one of her friends said that God was sexist because Jesus was a boy, she wrote “The Female Messiah,” imagining the Messiah as a woman and picturing how her struggles would have been different than those faced by Jesus.

Standing at the top of the list is “Jesus and Hitler: A Romance,” an adult historical-fiction story that dives into homosexuality and gender identity. This story received mixed responses. Fans of the story shared comments like: “This is the most beautiful thing I have ever had the honor to read;” and “The greatest relationship of all time!”

A few readers claimed to be traumatized, scared, disgusted or shocked that the story wasn’t banned. One person even said, “I’m extremely concerned about whoever wrote this — are you okay?”

Surfing through the stories, a reader can also find Jesus coupled with Satan, Judas, Elon Musk, Nicolas Cage and even Shrek.

About a story she wrote about Jesus giving in to some of his basic urges before his impending death, Egggorll said, “I wanted to create a world in which Jesus was far from the perfection that I had been told he was. It was a way for me to pretend that even though Jesus was painted as perfection for much of my childhood, he could actually be as sinful as any other person in today’s day and age.”

Not all of the oddest matches are sexual, however. A fanfic reader can simply enjoy feats of faith as meditations, know what it feels like to be cursed by a canonized Freddie Mercury or join Jesus on his adventures in Hogwarts.