(RNS) — Anniversary is a terrible word to remember a national tragedy like Jan. 6, 2021. A violent attack on the U.S. Capitol, aimed at stopping the certification of the election of President Joseph Biden and Vice President Kamala Harris, made for a day, to borrow the words of President Franklin Roosevelt, that will “live in infamy.” Calling our remembrance of the events an anniversary is insufficient to the complicated realities of the day, which should have our constant attention.

Congress’ inquiry into the instigators of the attack exposes not only the deep divisions of our nation, but the former president’s determination to use every legal means at his disposal to resist the investigation. For several families, Jan. 6 will be remembered as the day a loved one died, registered in their calendars alongside birthdays and wedding days.

For too many Americans, the day will be remembered as the day when a Confederate battle flag — the flag that misuses St. Andrew’s cross — was paraded through the Capitol Rotunda, a travesty that never took place during the Civil War. For many of us who are African American, the day reminds us how differently violence and the threats of violence are viewed and dealt with by the authorities, depending on the race of the attacker. “We who are dark,” to borrow from W.E.B. Du Bois, “know how dead we would be” if we had tried what the insurrectionists attempted.

The intersections of religion and race, particularly the blatant expressions of white Christian nationalism and the vandalism of historic African American congregations leading up to that day, also demand reflection as we contemplate the future of democracy.

In short, we simply cannot forget that day. It was former Secretary of Homeland Security Jeh Johnson who said Jan. 6 is a day that should not be normalized. Instead, we need to explore and understand its causes, said Johnson, who called the attack the “tip of an iceberg of extremism.”

We particularly need to examine the racism that we now know was such a motivating factor for the overwhelmingly white, male and Christian participants. The myths of replacement of “real” white Americans by Jews and people of color were part of the mental toolkit of many insurrectionists and their supporters. We need to know this enemy because, as Johnson lamented, “I’m afraid that Jan. 6 is not the last such event we may see.”

So yes, let us remember. Let us examine and understand and raise our consciousness and seek strategies for truth and reconciliation. Let us drag out into the light the larger historical and sociocultural contexts that facilitated the violence and how those contexts were exploited by our political leaders to inspire the insurrection. And let us mark that awful day when a gallows was erected for the purpose of lynching Vice President Mike Pence.

Let us take a national annual remembrance as an opportunity to teach important moral, civic and cultural lessons that will deter future attacks and, as importantly, foster the kind of human relations that celebrate and affirm the value of human differences.

But let’s not remember it as an anniversary, the kind associated with gifts and celebrations and marked by silver, golden and diamond jubilees. The term “anniversary” recalls for me the annual homecomings in churches, where they celebrate their origins or their pastors. If I have been invited to be a speaker or a preacher on such an occasion, I celebrate the contributions of past significance to the future possibilities of the organization and its leaders.

What should we call Jan. 6? The day happens to fall on a Christian feast day called Epiphany, marking the visit of the Magi to the baby Jesus — a celebration of the revelation of Christ to the gentiles. In Christian churches we often sing John H. Hopkins’ Christmas carol “We Three Kings,” which notes the diversity of gifts these august visitors brought. The usual depictions of the Magi include men of different races — a diversity captured by Langston Hughes in his poem, “Carol of the Brown King.”

Epiphany is an anniversary day that calls upon us to bring our fine gifts to the most humble spaces in order to build a better, more inclusive, more just and more peaceable nation and world.

The meaning of “epiphany,” uncapitalized, is “a revealing scene or moment” and “an illuminating discovery, realization or disclosure” that is “sudden.” Jan. 6 is just such a moment — when many of us painfully discovered the fragile nature of our democracy and realized that the struggle to build a more inclusive and perfect union calls for all of our efforts, all of the time. 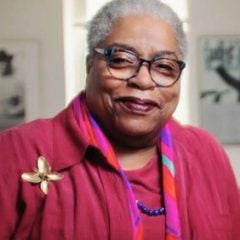 (Cheryl Townsend Gilkes is the John D. and Catherine T. MacArthur Professor of African American Studies and Sociology at Colby College; assistant pastor for special projects at Union Baptist Church in Cambridge, Massachusetts; and author of “If It Wasn’t for the Women: Black Women’s Experience and Womanist Culture in Church and Community.” She dedicates this essay to the memory of activist and friend Karl S. Menger (1936-2021). The views expressed in this commentary do not necessarily reflect those of Religion News Service.)