(RNS) — As the nation remembered the Capitol riots on Jan. 6 earlier this month, a deluge of articles highlighted the role of white Christian nationalism and its ongoing threat to democracy. This was absolutely necessary. Yet, white Christian nationalism has been tied to an even greater crisis over the past year, namely, the COVID-19 pandemic and widespread reluctance to get vaccinated.

Studies show that Americans who espouse Christian nationalist ideology are more likely to refuse vaccination, despite extensive evidence that the vaccines are safe and effective.

Why is Christian nationalism connected with both the Capitol riots and vaccine refusal?

One reason is that Christian nationalism is powerfully linked with white Americans affirming baseless conspiracies, including QAnon myths, antisemitic tropes, rampant voter fraud, Trump’s “Big Lie” and general vaccine misinformation. Another, no doubt, is that such Americans trust right-wing television, websites and radio for their news.

But there is something more fundamental going on — something that makes these Americans vulnerable to conspiracy theories and bad information. Multiple data points show such Americans have a greater tendency toward dogmatism — the tendency to insist one’s beliefs are true without regard for counter-evidence.

Christian nationalism, in other words, didn’t necessarily coincide with ignorance. Rather, it reflected a powerful dogmatism that rejected any facts that were inconsistent with cherished narratives.

In another co-authored study, we tested whether Christian nationalism predicted how Americans scored on a quiz about religion in American political history. Unsurprisingly, we found white Americans who scored higher on Christian nationalism criteria also held incorrect views about things like whether the Supreme Court actually banned people from praying in schools (no) or whether the First Amendment allows Congress to privilege Christianity (no).

But again, the scoring patterns were revealing. Not only were white Christian nationalists more likely to pick incorrect answers that stressed the supremacy and victimization of Christianity, they were also less likely to pick “don’t know” responses.

Not only were they wrong; they were confidently wrong — dogmatically wrong.

We observed this dogmatic tendency in a more direct way in a February 2021 survey in which psychologist Josh Grubbs and I asked Americans how much they agreed with six statements affirming that they could be wrong and would be willing to change their minds when confronted with new evidence.

Americans who disagreed with these statements would be considered more dogmatic. We added up the questions to create a scale from 1 to 24, with higher scores indicating greater dogmatism.

Even after we account for political conservatism, religious commitment and other social characteristics, we find Christian nationalism is the leading predictor that white Americans are more dogmatic. That is to say, embracing the view that America has been and should always be distinctly “Christian” is the leading indicator that white Americans are unwilling to consider the possibility that they could be wrong, that they are unwilling to change their views even in the face of conflicting evidence (see Figure). 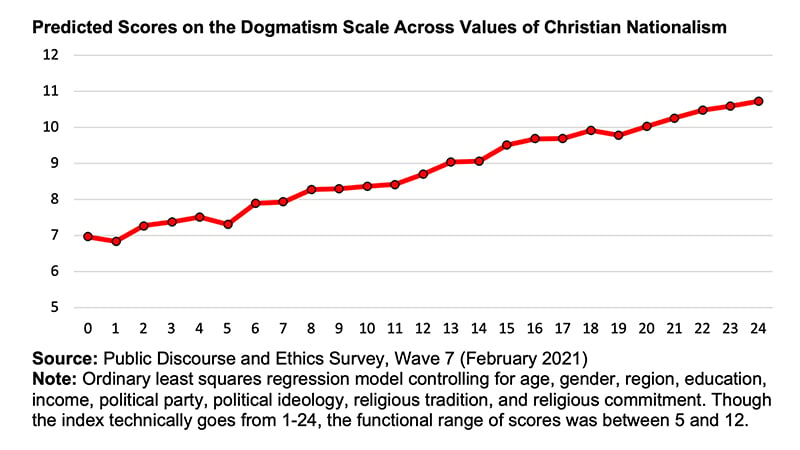 Christian nationalism, then, correlates with dogmatism. But does one cause the other? And if so, which causes which?

Perhaps some of both. In fact, both nationalist feeling and dogmatic belief are likely influenced by a combination of personality and a cultural context that stresses holding onto certain beliefs “by faith” regardless of evidence. Our current levels of polarization are only worsening the problem. Both white Christian nationalism and the intense dogmatism that accompanies it are amplified by in-group and out-group dynamics.

The same seems to be true of dogmatic commitment to misinformation. Committed partisans are guided by “motivated reasoning” to seek out and believe factually incorrect information about their political opponents, even when they are offered financial incentives for gathering correct information. The psychic rewards of tribal psychology and confirmation bias supersede financial gain.

This is obviously a tremendous challenge. But we are not powerless. All of us can take personal responsibility for toning down rhetoric, paying for responsible journalism, reposting only accurate information and reporting fake news.

But beyond this, several studies now confirm that deplatforming bad actors is actually effective. When politicians or provocateurs who repeatedly sow hatred and misinformation online are banned from mainstream social media platforms, their reach isn’t completely eliminated. But it is constrained.

A sizable minority of white Americans embrace the view that America has been and should always be for “Christians like us.” Even as their numbers diminish in the general population, bad actors are working to isolate and radicalize these Americans toward political goals. Along with striving to persuade our fellow citizens who are being manipulated, sidelining those bad actors wherever possible should be our top priority.

(Samuel L. Perry is an associate professor of sociology at the University of Oklahoma. He is the author of two books on Christian nationalism, including the award-winning “Taking America Back for God: Christian Nationalism in the United States” (with Andrew L. Whitehead) and the forthcoming “The Flag and the Cross: White Christian Nationalism and the Threat to American Democracy,” with Philip Gorski. The views expressed in this commentary do not necessarily reflect those of ARDA or Religion News Service.)

Donate Now!
Posted in
Ahead of the TrendChristianityEvangelicalFaithJudaismPoliticsProtestantU.S.