(RNS) — Last month I published a column about how the Church of Jesus Christ of Latter-day Saints had just added an editorial note to a February 1973 article titled “Strengthening the Patriarchal Order in the Home.” That article, the magazine editors’ note suggested, was no longer fully in line with the Church’s values or teachings.

“Articles in the magazines archive may reflect practices and language of an earlier time,” the editors said, before redirecting readers to some of the Church’s more recent statements on gender and the family.

Well, it turns out there is quite a backstory here.

Poet, memoirist and performer Carol Lynn Pearson contacted me to share that story, in which she was directly involved.

Pearson was supposed to have the cover article in that month’s issue of the “Ensign,” the Church’s official magazine for adults. She had written a nice, fat, well-researched piece on the Mormon women of a century earlier, exploring all the marvelous things they had done. When Jay Todd, the editor of the magazine, first read the submission, he bought it that very same day for publication in the February 1973 issue.

The article was edited, typeset, and sent to Pearson for proofreading, as was the usual progression of events. 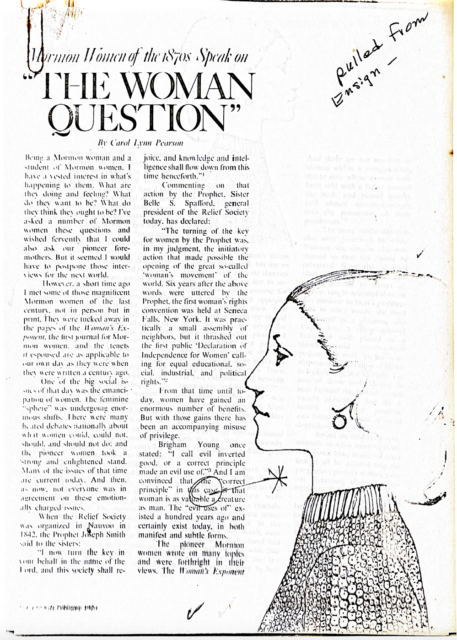 The first page of the laid-out article for the February 1973 “Ensign” magazine.

And then … she heard nothing. The issue never arrived. Busy with her children and pregnant with another, she didn’t have much time or energy to pursue it, but she did place a call to her friend and advocate Leonard Arrington, the official historian for the Church. She had a vague sense that perhaps something was wrong.

That suspicion was confirmed on Valentine’s Day, when Arrington called her back.

“His first words were, ‘I have bad news for you. Your article has been pulled from the “Ensign”,’” Pearson recorded in her diary. “As he went on talking I started to cry, cast again into that blackest of pits that says, ‘Mormon woman, get down, down, down, down, down. Let the brethren do your thinking. Give up. Don’t try.’”

So, what had happened to Pearson, a respected and oft-quoted author the Church was proud to publish? Apostle Boyd K. Packer had quoted her poetry in General Conference as recently as 1971.

Here’s what: Pearson had testified before the Utah State Legislature in support of the Equal Rights Amendment. And the mere fact of that — more so than anything she actually said — was enough to make her a mormona non grata overnight. Pearson says she also, around this time, had been asked by the Church Education System to evaluate some curriculum that was intended for the young women of the Church, and she had the audacity to tell them it needed improvement.

“It was really just awful,” she told me this week in a Zoom interview. “‘Young women, do not be seduced by the wiles of the world. You are to be a homemaker.’” So Pearson wrote a letter outlining where the curriculum could be worded differently, and her letter was passed up the chain of the education department until it reached the desk of — wait for it — Boyd K. Packer, the same apostle who had quoted her so approvingly in General Conference.

Pearson made an appointment to try to talk to someone in the hierarchy about why her “Ensign” article had been pulled and to see if there was anything she could do to rectify things. That man, Doyle Green, was the supervisor over the Church’s magazines. He was a fan of her writing and seemed embarrassed by the Church’s decision, but he also defended it. She said he told her, “We have enjoyed your poetry for so long, but now that you have joined the women’s lib movement, the Church will no longer support you.”

Pearson still has copies of the correspondence about this, including the “Ensign” editor’s pleading letter to Belle Spafford, the general president of the Relief Society, trying to reverse the decision to pull Pearson’s article. 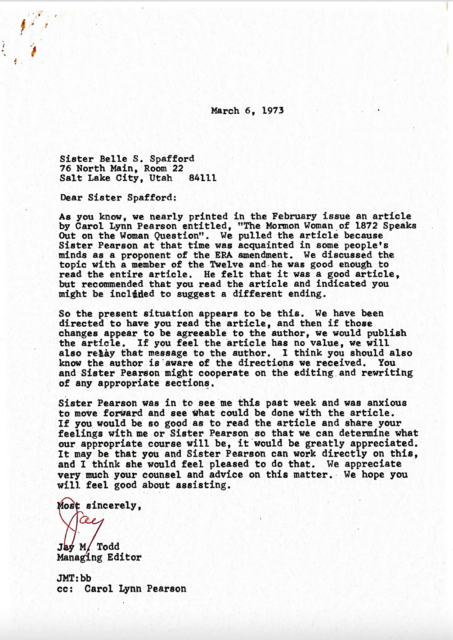 “As you know, we nearly printed in the February issue an article by Carol Lynn Pearson entitled, ‘The Mormon Woman of 1872 Speaks Out on the Woman Question,’” he wrote to Spafford. “We pulled the article because Sister Pearson at that time was acquainted in some people’s minds as a proponent of the ERA movement. We discussed the topic with a member of the Twelve and he was good enough to read the entire article. He felt that it was a good article, but recommended that you read the article and indicated you might be inclined to suggest a different ending.” 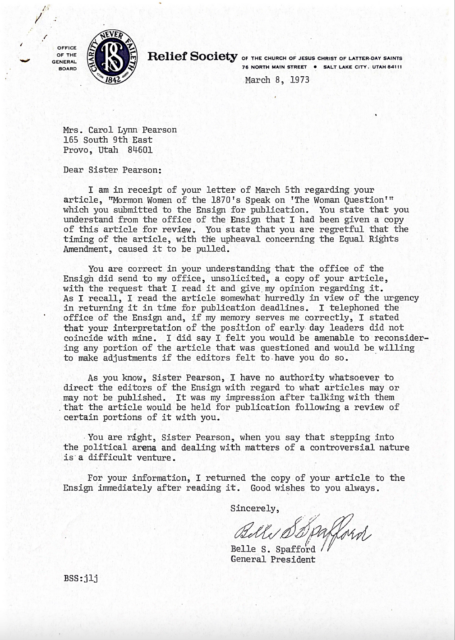 Spafford was unmoved. Pearson’s “interpretation of the position of early day leaders did not coincide” with her own, she said. Moreover, she maintained that she had “no authority whatsoever to direct the editors of the ‘Ensign’” about what to publish — even though the editor-in-chief of the magazine had written to her two days before to enlist her support.

The long and the short of all this is that the article was never published. What was published was the “Strengthening the Patriarchal Order in the Home” piece that the Church has now accompanied by a black box warning.

Looking at Pearson’s article nearly half a century later, it’s striking how much what she wrote conforms to the Church’s current approach to women’s roles — the idea being that women can do or be anything so long as they understand their highest and best role will always be that of mother. Even the most progressive pioneer women, Pearson wrote, “were not abdicating their responsibilities to their families”:

They believed strongly in being loving, pleasant, supportive wives and in running cheerful and efficient households. They admonished each other that above all a woman should enjoy the right to “fill the noblest, holiest and most exalted position occupied by humanity on the earth — that of moulding pliant, tender beings for lofty purposes in time and an exalted immortality hereafter.”

Not very radical stuff, that! But as Pearson says, it was guilt by association with the ERA, rather than the content of the article per se, that got her in trouble.

The article was never published, though Pearson eventually was allowed to write for Church magazines again (“except on the subject of women,” as Brother Doyle explained when he told her the news). So I am attaching it here with her permission as a downloadable PDF.

After 49 years in a file cabinet, I’m happy it can now see the light of day — a reminder not only of the strength of Mormon women from the 1870s but of the resilience and grace of one from the 1970s as well.

Softening Mormon patriarchy, one correction at a time 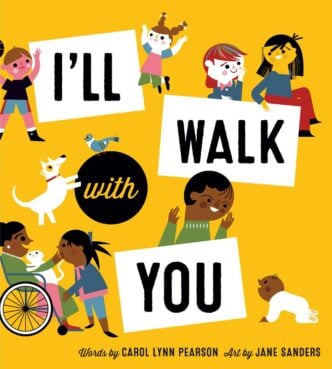 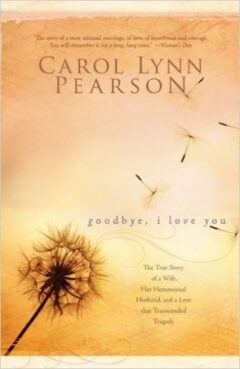 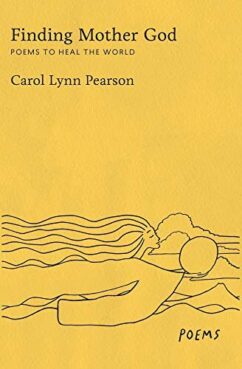 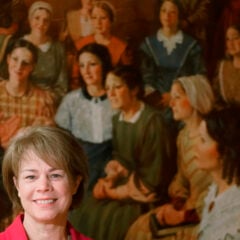