(RNS) — In February 2021, Amina Massai Jefferson-Motley dressed in a white shirt and pants for her baptism.

Her mother stood nearby as an associate minister of First Baptist Church of Glenarden asked the little girl about her Christian beliefs.

“I’ve been wanting to get baptized for years now and I finally got to do it,” said the now 11-year-old in an interview during Holy Week, when Christians say their baptism symbolizes their belief in Jesus’ crucifixion, death and resurrection.

“After I got baptized, I just felt so grateful that I was saved, and the Holy Spirit was with me.”

Brandi Jefferson, who assisted her daughter’s immersion in the bathtub, said the virtual baptism was an answer to her prayers. The mother and daughter had been watching the congregation’s services online after they moved away from Maryland. But Jefferson didn’t know how to fulfill her daughter’s request for baptism when they were physically distant from her church of almost 20 years.

Fourteen months after the fifth-grader took part in the ritual, the church has held 91 virtual baptisms. It is planning to start in-person baptisms on Tuesday, but the bathtub variety will still be offered to online campus congregants. 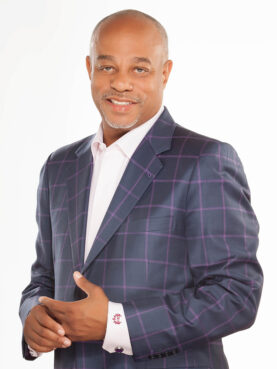 “We’re getting people baptized and being obedient to Christ all over the world,” said Pastor John K. Jenkins Sr., the leader of the predominantly Black church in the suburbs of Washington, D.C.

“This pandemic has pushed me to understand that there are things that I never thought we could do that we can do.”

The megachurch is not the first to expand the tradition from the sanctuary to the screen — requiring for each ceremony for a baptismal candidate someone to assist with the baptizing, and someone to hold the camera as the online officiant declares the public act of faith “in the name of the Father, the Son and the Holy Spirit.”

There are online videos of such ceremonies dating to the 2000s, including one in a Georgia bathtub where the officiant was in Florida. Another was in a swimming pool in Alabama when the local pastor was away at a conference in Indiana. John Dyer cited these instances in his blog about technology and theology in 2020, adding that the woman who requested the pool baptism had been ill and died four days after the ceremony.

Dyer, a vice president at Dallas Theological Seminary, wrote that a church’s decision to engage in virtual baptism “may depend on how your community understands the meaning of baptism.” For those who make that choice, he recommended using “physical water,” including the declaration “I baptize you in the name of the Father, the Son, and the Holy Spirit,” and being baptized by another Christian. 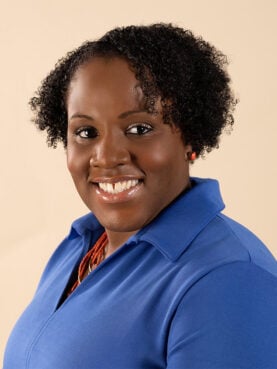 The Rev. Keshia Dixon, online campus minister at First Baptist Glenarden — which recently added “International” to the end of its name — said her church has determined that the baptism assistant does not have to share the faith of the baptized.

Dixon notes in an instructional video she created for baptismal candidates that there are options if a bathtub is too small or not available. She suggested a jacuzzi — “but make sure the water isn’t too hot” — a swimming pool or a public body of water. Alternatively, the assistant can pour a warm pitcher of water over the head of a baptismal candidate sitting on a chair in a tub or shower stall.

The beaches in her location in Arima, Trinidad — where ocean baptisms are traditionally common — were closed to the public due to the COVID-19 pandemic, and she didn’t have a bathtub. So, after the “blown away moment” when she learned virtual baptism was possible through First Baptist Glenarden, she also discovered she could use her shower for the ritual.

“This is really working out for me,” she recalled thinking ahead of her Aug. 28 baptism. “God is just opening pathway after pathway to make this possible.” 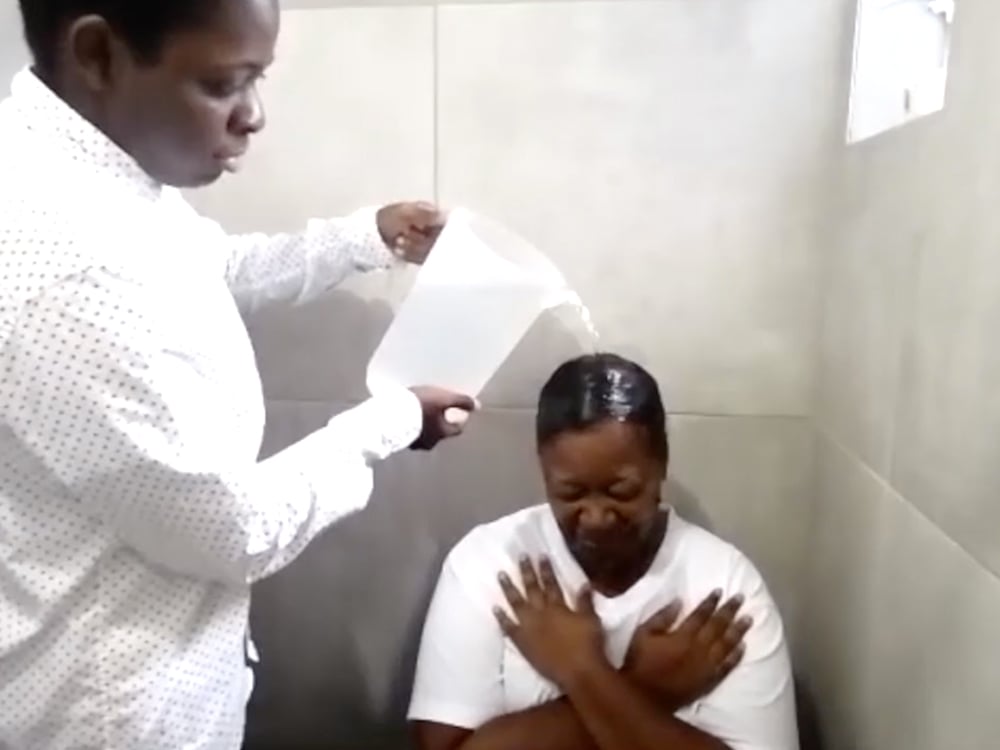 Alicia Cameron, right, is virtually baptized with the help of her son pouring water over her at their home in Arima, Trinidad, on Aug. 28, 2021. Video screen grab

Now, Easter has new meaning for Cameron, 45, a senior manager at an educational institution who used to consider Christmas the more prominent holiday.

“This time around, for me, Easter takes on a new significance now that I’m reevaluating what Christ really did around this time and what that meant for me as a child of God,” she said.

“I’m going to use it to be very introspective, very reflective of the true meaning of what Easter is all about.” 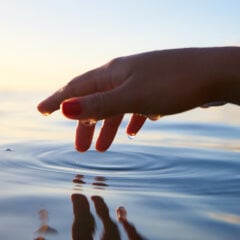 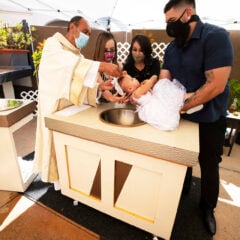 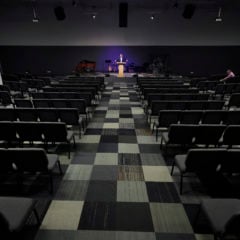 News
Houses of worship grapple with the future of their online services
Follow us on Facebook!
Submit your photos to RNS