(RNS) — Days after the Supreme Court ruled that Boston had violated a Christian group’s rights by denying a request to fly its flag over Boston’s City Hall Plaza, the Satanic Temple, a religious freedom advocacy group, has applied to fly its flag during “Satanic Appreciation Week” later this summer.

The Satanic Temple’s aim is to test whether the city’s court-ordered acceptance of flags from religious groups includes a commitment to plurality.

“A public forum that allows for religious expression can either announce a dedication to religious pluralism,” said Lucien Greaves, Satanic Temple’s co-founder and president, “or it can signal a decline into theocracy by allowing public representatives to dictate limits on the civic capacities of some religious identities by exercising exclusive preference for others.”

The city did not respond to a request for comment.

In July 2017, Harold Shurtleff, director of Camp Constitution, a New Hampshire-based organization that seeks to teach families about “(America’s) Judeo-Christian moral heritage,” applied to fly a Christian flag in City Hall Plaza during an hour-long ceremony commemorating Constitution Day, September 17. In the past the city has flown flags honoring various countries, groups and causes. Boston did not have any guidelines on what flags can be flown.

Shurtleff’s request was declined by Boston officials on the grounds that the religious flag would violate the First Amendment’s establishment clause, disallowing support for any religion by the federal government. Shurtleff sued, and while intermediate courts sided with the city, on Monday, the Supreme Court concluded that “the city’s refusal to let Shurtleff and Camp Constitution fly their flag based on its religious viewpoint violated the Free Speech Clause of the First Amendment.”

Justice Kavanaugh, in a concurring opinion, wrote, “Under the Constitution, a government may not treat religious persons, religious organizations, or religious speech as second-class.” 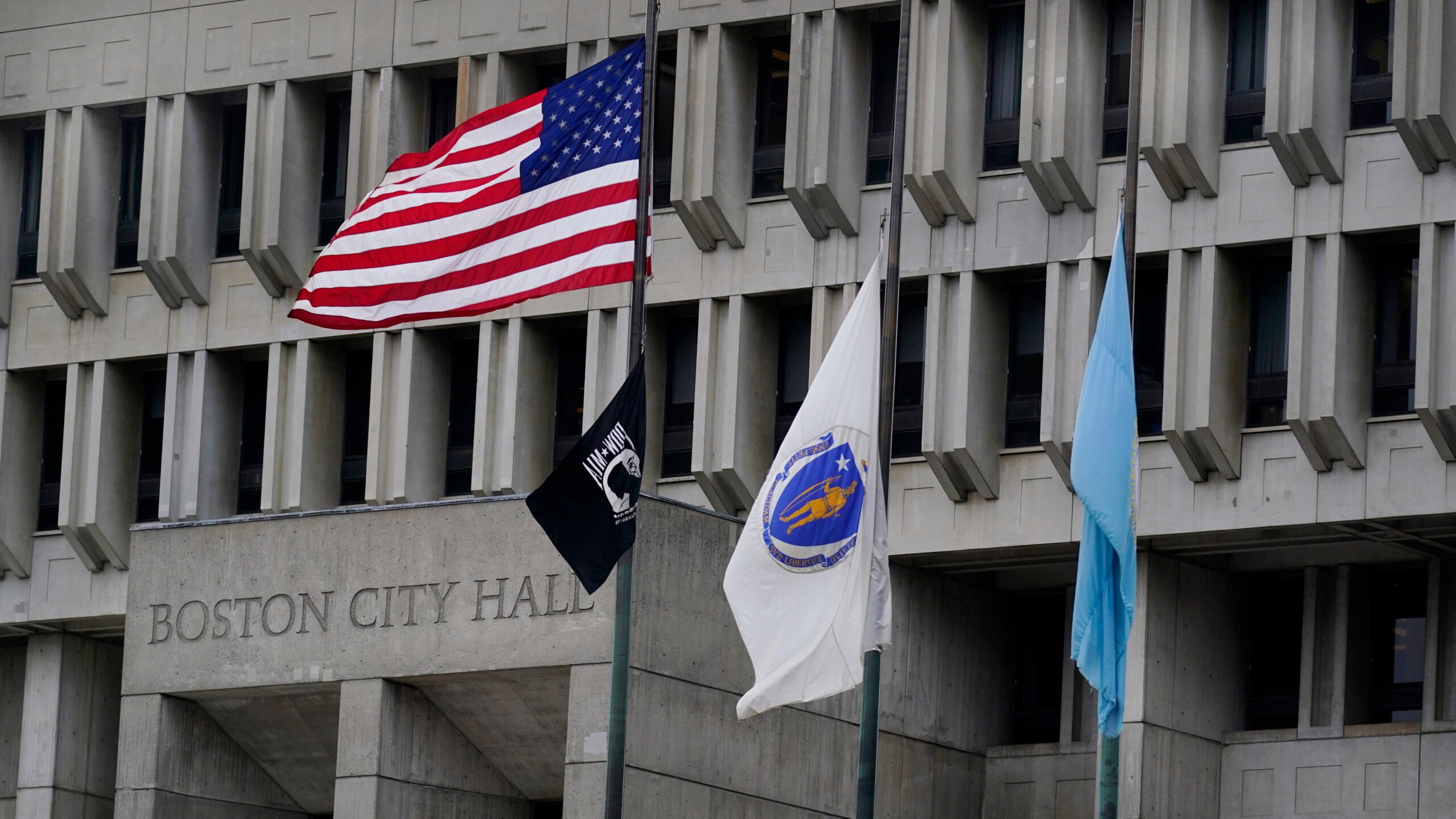 The American flag, the Commonwealth of Massachusetts flag, and the City of Boston flag, from left, fly outside Boston City Hall, Monday, May 2, 2022, in Boston. A unanimous Supreme Court has ruled that Boston violated the free speech rights of a conservative activist when it refused his request to fly a Christian flag on a flagpole outside City Hall. Justice Stephen Breyer wrote for the court Monday that the city discriminated against the activist because of his “religious viewpoint,” even though it had routinely approved applications for the use of one of the three flagpoles outside City Hall that fly the U.S., Massachusetts and Boston flags. (AP Photo/Charles Krupa)

Shortly after the decision was announced, there were calls on social media for The Satanic Temple to apply to hoist a flag in Boston. The Salem-based organization did not disappoint.

“Far from being an arbitrary exercise in hilarity — as we often see our claims for equal access contextualized in the press,” Greaves told Religion News Service, “our demands that the government respect viewpoint neutrality in a public forum has profound consequences for anybody concerned with the preservation of their civil liberties, regardless of their religious identification.”

The Satanic Temple is known for its activism defending religious freedom and other First Amendment rights across the nation. In 2014, its campaign to install a statue of Baphomet, a seated goat-headed figure, at the Oklahoma State Capitol alongside a memorial to the Ten Commandments ended when the state supreme court ordered the Ten Commandments memorial be taken away.

Last December, the group placed a baby Baphomet figure in a holiday display at the Illinois State Capitol, drawing fire from the local Catholic bishop.

RELATED: The Supreme Court debates public prayer. So should we.

The Satanic Temple was already at odds with Boston in a separate religious freedom case. In 2021, the Temple sued the city for its selection of officiants for the opening prayer at City Council meetings, arguing that the council has invited only mainstream religious leaders but has never asked The Satanic Temple. The case is ongoing.

Satanic Appreciation Week, according to Greaves, was a community event and initially had nothing to do with the flag action. Greaves said, “The stakes are high, and if we allow officials to discriminate against any form of religious expression or opinion, they can do it to another.”