“We are sad because we will miss her powerful preaching, her electrifying teaching, her dynamic leadership, and her loving spirit,” stated the board of bishops in a statement. “We are glad because she is free from her infirmities and is in the presence of her Lord, whom she served so faithfully.”

Hines, the 98th bishop of the AME Zion Church, died on Monday (May 23), the bishops’ statement said. She was the sole female bishop of the historically Black denomination that dates to 1796.

The Rev. George McKain, director of public affairs for the denomination, said Hines was known as an “unbelievable teacher” as well as a powerful preacher.

“She was our first female bishop, so against all the odds of the old system, she rose with a freshness and with a power single to none,” he said. “For her to be such a quiet yet powerful individual, it was amazing that she was the one God chose to raise up as the example and the pioneer for women in ministry.”

Hines served as the presiding prelate of a West African district and later was assigned to the U.S. district that includes churches in Arkansas, Louisiana, Mississippi, Oklahoma, Texas and West Tennessee. 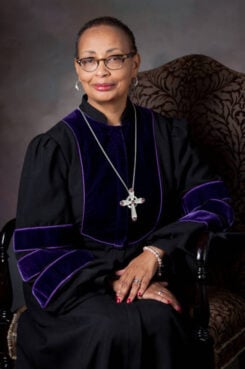 Most recently, she has overseen churches in South Carolina and Georgia. She was also the chairperson of the board of trustees of Clinton College in Rock Hill, South Carolina.

Clinton President Lester McCorn mourned the loss of Hines, who he said served on his school’s board for six years.

“She was a strong advocate for the College, advancing the Special Education Fund in each of the Annual Conferences, in support of scholarships for students,” he said in a statement. “A lover of sacred music, Bishop Hines became an avid supporter of the new choir and music program at Clinton.”

Hines told The Sun-Chronicle, an Attleboro, Massachusetts, newspaper, that she knew from age 16 she was meant to be a minister.

Once a buyer for Belk Department Stores, she said an illness forced her to leave the fashion world behind. “I bargained with God,” she said, saying she would follow divine guidance if she survived.

She told the newspaper, located in a state where she once oversaw congregations after the death of another bishop, that she hoped her historic bishop’s role would be an inspiration for others.

“For myself, I’m honored and very humbled to be the first female to be elected,” she said of her denomination.