I have had it.

You have had it, as well.

But, this is not the first time that I, and we, have said “enough.”

Since Sandy Hook, this nation has experienced more than 3,500 mass shootings.

A Black church in Charleston (2015). A government-funded nonprofit center in San Bernardino (2015). A gay nightclub in Orlando (2016). A country music festival in Las Vegas (2017). A high school in Parkland (2018). A synagogue in Pittsburgh (2018). A Walmart in majority-Hispanic El Paso, followed just hours later by a shooting in a popular nightlife corridor in Dayton, Ohio (2019). Asian American massage businesses in Atlanta (2021). Last week in Buffalo and in California and …

And so, we say “enough.” We say to ourselves: This will be the last time we utter that word, “enough.”

Until the next time.

We can say with utter certainty — with emunah shleimah, with complete faith — there will be a next time.

It is like a grim version of one of my favorite movies, “Groundhog Day.” Phil Connors (played by Bill Murray) keeps waking up on the same day — Groundhog Day — in the location of the official Groundhog Day festivities in western Pennsylvania. He is trapped in an endless time loop, a version of the mythic eternal return. But, eventually, he realizes he can use his constant reawakenings as opportunities to learn.

That is us. This is a moral “Groundhog Day.” We reawaken from this regular nightmare of guns and shootings and mass death, and as yet, we have not learned anything.

I love this story that comes from the soul of Reb Nachman of Bratslav, one of Hasidism’s finest teachers.

There is a king, whose wise men tell him they have learned the coming harvest is tainted. Whoever eats of the harvest will go insane.

“What should we do?” they ask him.

The king tells them this: “We will eat of the harvest, because to not eat of the harvest will condemn us to starvation. But, at the very least, this is what we must do. We will put marks on our foreheads, so that when we look at each other, we will know, at least, that we are insane.” 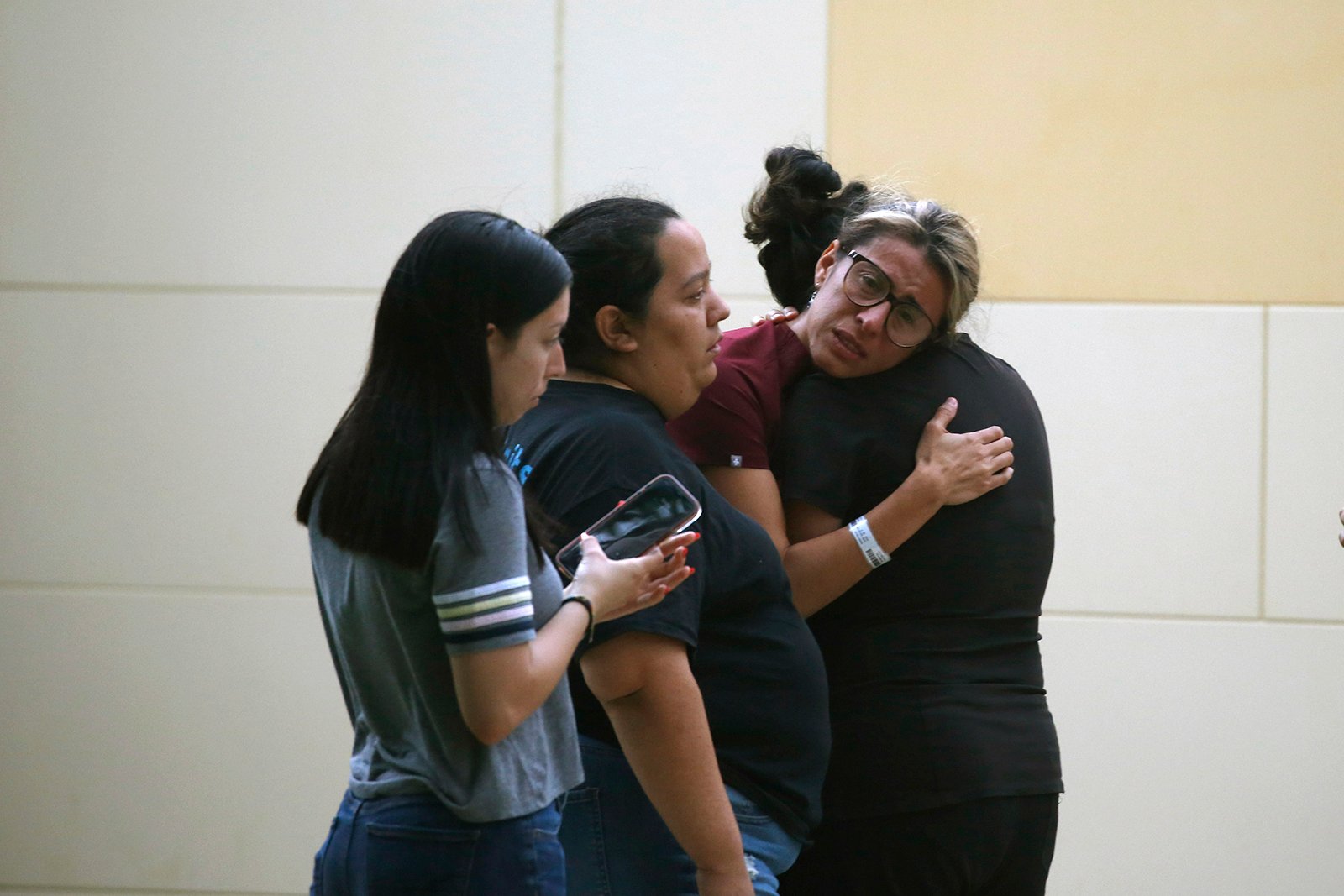 People react outside the Civic Center after a deadly school shooting at Robb Elementary School in Uvalde, Texas, May 24, 2022. (AP Photo/Dario Lopez-Mills)

There are far too many politicians who have been reticent and reluctant and who have refused — categorically refused! — to apply a tourniquet to the bleeding of this nation.

I have three questions for those politicians.

The first question: What does it mean to be pro-life?

I have a hunch most politicians who are pro-life, or against women’s health choices, are pro-gun. Or, at the very least, opposed to any kind of sensible, rational gun control.

Those politicians care about fetal tissue. They care about a microscopic collection of cells.

We would ask you to care about the tissue of a human being outside the womb — at 4 years, or at 14 years old, or at 40 years.

The second question: What does it mean to be pro-Bible?

Many who are pro-gun pride themselves on their connection to the Bible.

I invite them to study Bible with me.

Every head is ailing, and every heart is sick.
From head to foot, no spot is sound.
All bruises and welts, and festering sores …
When you lift up your hands, I will turn my eyes away from you;
Though you pray at length, I will not listen.
Your hands are stained with crime.

Those hands are your hands — stained with the blood money of the National Rifle Association. Deal with it. Ask God for forgiveness.

Come study with me the words of this week’s Torah portion. It is arguably the most horrific verse in the entire Torah. It refers to the consequences of destruction in the northern kingdom of Israel. It contains a curse so despicable there is a tradition to read it in a whisper.

Yes, things would become so bad the ancient Israelites would have to resort to the unspeakable and the unthinkable. (It would not be the last time this happened in history. It happened during Stalin’s forced famine in Ukraine).

The pro-gun lobby in this nation is inviting us to devour the flesh of our sons and of our daughters.

Yesterday, President Joe Biden had God on his lips. “When in God’s name are we going to stand up to the gun lobby?”

He is right. Any coherent reading of the biblical text — both testaments — would force us to say the same thing. To be a religious individual, to act in God’s name, is to stand against those who seduce us into the kingdom of death.

You know that sweet, beautiful town in Connecticut — New Canaan?

We are the New Canaan. A “modern” version of an ancient culture that sacrificed its children to Molech. That Molech is the gun lobby.

The Torah revolution was the revolution that said “no” to child sacrifice.

Until we engage in that revolution, in our time, we are idolaters.