(Interfaith America) — Outraged by the massacre of 19 children and two teachers inside a school in Uvalde, Texas, on Tuesday (May 24), organizers of an interfaith protest for stricter gun laws will gather outside of a Houston convention center on Friday where the National Rifle Association is holding its annual meeting.

“Civil and human rights happen when you have interfaith leaders that come together,” the Rev. Teresa Kim Pecinovsky of Houston said. “We have political power too.”

Pecinovsky, a hospice chaplain and children’s book author who is affiliated with the Disciples of Christ denomination, was looking at social media Monday afternoon when news of the killings began filling her feed. She messaged Megan Dosher Hansen, a social media contact who lived nearby, asking if she knew of any faith groups gathering at the NRA meeting.

“I reached out to her and said, ‘Why don’t we co-organize an interfaith protest?’ And she said, ‘All right, I’m on board.’”

By Thursday morning, some 400 people had signed up and word was spreading on social media. The two began a phone campaign as well, reaching out to Muslims, Jews, Buddhists, Catholics, and members of other Protestant denominations. “We’ll gather and pray together and do a silent march through the convention center and come back out and recognize the victims,” Hansen said.

Texas gun laws are among the least strict in the nation; a law that went into effect September 1 allows people to carry handguns in most public places without permits or special training. 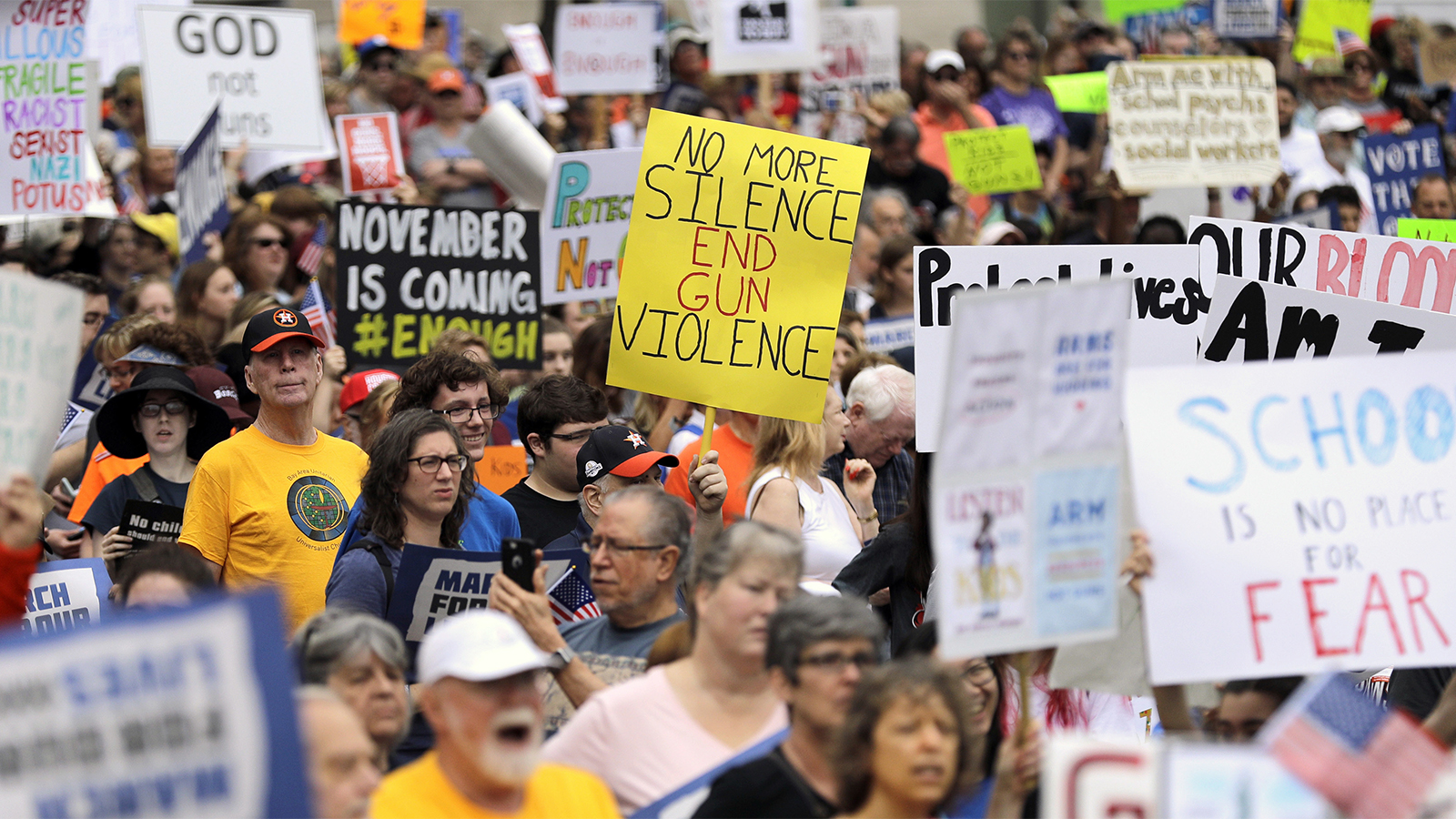 Demonstrators gather for a “March for Our Lives” protest for gun control legislation and school safety on March 24, 2018, in Houston. Students and activists across the country planned events in conjunction with a Washington march spearheaded by teens from Marjory Stoneman Douglas High School in Parkland, Fla., where more than a dozen people were killed in February 2018. (AP Photo/David J. Phillip)

The protest is planned outside the NRA convention, the organizers said, to send a message to politicians who receive donations and support from the gun rights group. The NRA “used to be an organization that is for hunters, and that’s a sport that doesn’t require AR-15s,” Hansen said. “We just see so much tragedy that occurs at the end of a gun.”

Pecinovsky said her first reaction to the Uvalde massacre was shock, rage and grief. “I have preschool age children and I was in high school when Columbine happened. I remember it very clearly. The teenagers who survived that are now parents and have their own school age children. It has not stopped since.”

Her voice broke as she described seeing images of the children and their parents, who were celebrating their achievements on the last day of the school year. As a former hospital chaplain, she witnessed the anguish of parents who have lost young children to violence. While it has been an honor to be present for grieving families and hospital staff, “You will never forget the images of dead children, and you will never forget the sound of their wailing mothers.”

“Most of us become anesthetized to the amount of murder that happens in our communities and our schools,” she said. “These are not other people’s children. These are our children.”