That was the question my synagogue executive director asked me, right before Passover.

In some ways, they are modern renditions of the High Holy Day cycle. They are also secular in nature — prompting us to remember not so much what God did for us (though there are certainly religious elements in all of these holidays), but what others did to us, and what we were able to accomplish for ourselves.

Of them all, Yom Yerushalayim has always been my favorite. In my inner, spiritual geography, nothing tops Jerusalem for me. It matters little how often I go, which is typically every year. The city grabs me anew, afresh at every encounter. My people’s history, the intermingling with other people’s histories, the sacred sites, the street life, the vistas, the hills that remind me, annually, how much I am aging — it is the place I feel most Jewish, most human and probably most Jeff.

I applaud and even revere the reunification of Jerusalem in 1967. That, along with the rest of the Six-Day War, was one of the seminal moments of my Jewish childhood.

For me and for other Jews, the reunification of Jerusalem 55 years ago meant Jews could have access to their holy sites. Not just Jews; all sacred sites would be open to any and all worshippers.

Between the War of Independence in 1948 and 1967, the ancient, walled city of Jerusalem was off-limits to Israelis and to Jews. I shall always remember an older Jew telling me how he had visited the Western Wall — in 1964. He had been on an organized British tour that would be entering the sacred precincts through Jordan, which controlled the Old City at that time.

Before the tour group entered, however, the British tour guide took him aside, and told him something that has haunted me ever since I first heard it. The guide told him: “I want to warn you about something. The area of the Wall is covered over with garbage. They have been using it as a dump. This will upset you, no doubt, but I tell you that if you begin to cry, our Jordanian partners will know that you are a Jew, and they will throw you off the tour.”

(The Jordanians desecrated far more than the Western Wall. They had plucked up gravestones from the Jewish cemetery on the Mount of Olives, using them as building material for army latrines. They had given Pan American permission to build the Intercontinental Hotel on top of those graves. Sort of makes you wonder why Pan Am is out of business.) 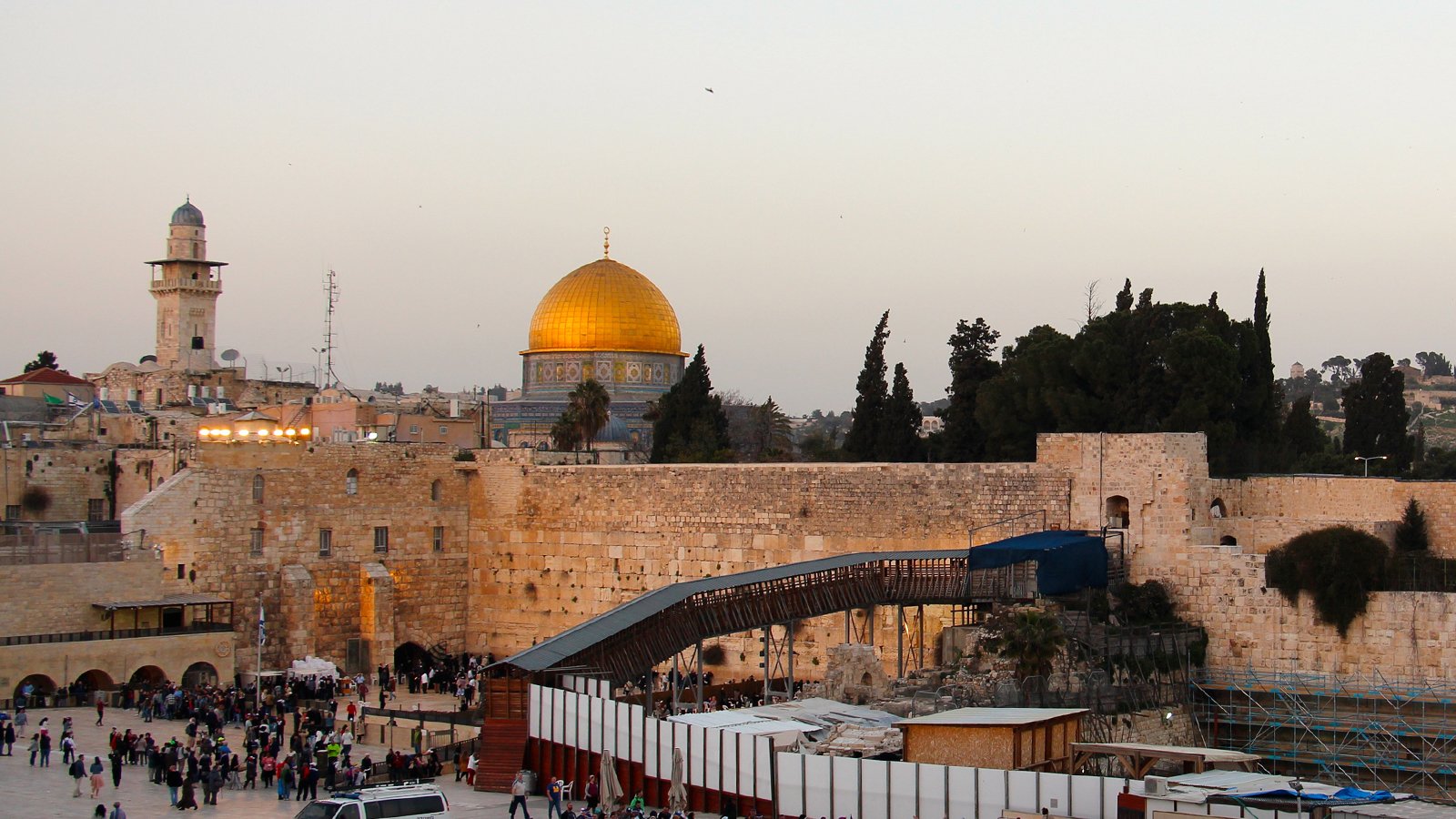 The Western Wall, bottom, and Dome of the Rock, top, on March 13, 2019. All three Abrahamic faiths make claims to parts of Jerusalem. RNS photo by Emily McFarlan Miller

On Yom Yerushalayim, I inevitably think of those stories of desecration and I give silent thanks that, as far as Jerusalem and its holy sites are concerned, our tears are dried up. There is no longer a reason to weep, except out of love, and out of a deep appreciation of the sanctity of place.

So, too: the Jewish Quarter in the Old City. It is an often overlooked architectural miracle. Between 1948 and 1967, the Jordanians systematically destroyed that centuries-old Jewish area. After 1967, Israel rebuilt the Jewish Quarter to its original scale.

On Yom Yerushalayim, I think of that rare act of urban renewal cast. It is not renewal. It is more akin to resurrection.

But, there is one aspect of the festivities that has long bothered me. It is that some Jewish residents of the city march through the Old City in Jerusalem, particularly through the Muslim Quarter. It is called the Flag March, in which they wave Israeli flags and shout ultranationalist slogans.

But, in my mind, context is everything.

Where, in the Old City, are the “proper” places for such celebrations of Jewish sovereignty over a united Jerusalem?

The Western Wall. The Jewish Quarter.

Not the Muslim Quarter. Such acts deliberately taunt the Arab residents of Jerusalem.

I am not alone in my discomfort. President Isaac Herzog called for “sensitivity toward the other.” Prime Minister Naftali Bennett decried “extremist elements.”

Or, to put it even differently, as my friends and teachers, Rabbi Donniel Hartman, Yossi Klein Halevi and Elana Stein Hain put it in a recent Hartman Institute podcast, “For Heaven’s Sake,” Jerusalem is holy, and the holy requires humility.

Here is my story of Jerusalem — the one I tell myself not only on Yom Yerushalayim, but on a regular basis. 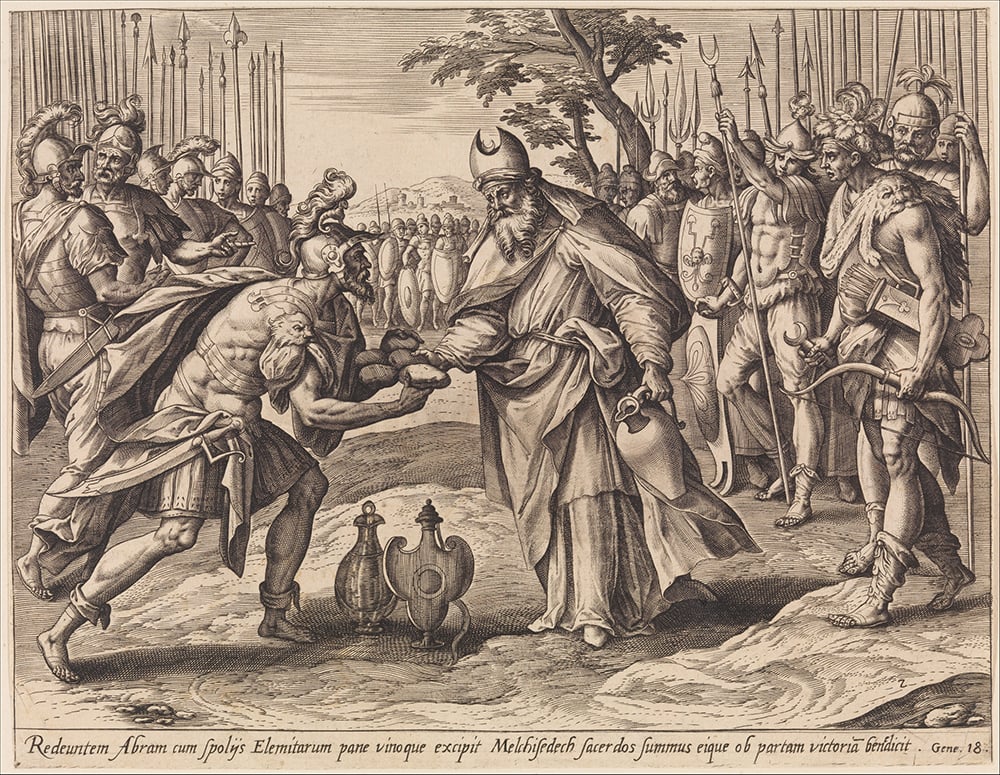 “The Meeting of Abram and Melchizedek” engraving. Image courtesy of Metropolitan Museum of Art/Wikimedia/Creative Commons

In Genesis 14, the patriarch Abram (whose name will become Abraham) wages a war against an alliance of kings. After his victory, Abram encounters a mysterious figure named Melchizedek. Melchizedek is both the king of Shalem and a priest of the Canaanite god El Elyon, God Most High. Melchizedek greets Abraham with bread and wine and blesses him in the name of his god.

It was the first interfaith luncheon in history.

A few chapters later in Genesis, Abraham will come to that place again. He will bring his son Isaac to Mount Moriah as a potential sacrifice. Abraham calls the place Yireh, “God will see.”

A midrash tells us Yerushalayim gets its name from the two names it has in Genesis: Abraham named it Yireh, and Melchizedek knew it as Shalem.

Yireh-Shalem becomes Yerushalayim, two names soldered together by history. A pagan priest/king who blesses Abraham gives it one name. Abraham, the father of our nation, gives it the other.

The name Yerushalayim is itself a matter of compromise.

To the flag marchers: That, too, is Torah.

Martini Judaism
Why ‘The Beauty Queen of Jerusalem’ matters
Follow us on Facebook!
Submit your photos to RNS