(RNS) — The hearings conducted by the House Select Committee to Investigate the January 6th Attack on the United States Capitol have highlighted the powerful role that white Christian nationalism played in the attack. “This is nothing less than an epic struggle for the future of our country. Between dark and light,” said Trump ally Roger Stone, firing up a crowd of pro-Trump protesters the day before the insurrection, according to the committee. “Between the godly and the godless, between good and evil, and we will win this fight or America will step off into years of darkness.”

Among the insurrectionists, there were crosses, Bible verses, “Jesus Saves” signs and “Jesus 2020” flags that mimicked the design of the Trump flags, intermingled with antisemitic symbols and slogans.

The closing frame of the deeply disturbing House Committee video of the violence that day featured two insurrectionists standing side by side on the scaffolding built for Joe Biden’s inauguration, each waving a flag. One was a Trump flag. The other was the Christian flag that stands on the dais behind the pulpit in Protestant churches across America.

Put this all in black and white, and the scene could be mistaken for a Ku Klux Klan event from a previous era. Indeed, given the resurgence of white Christian nationalism in American public life today, you might be forgiven for thinking our cultural clocks had been turned back a century.

That violent era was launched in what NAACP field secretary James Weldon Johnson dubbed “Red Summer,” when white terrorism and violence toward African Americans broke out in more than three dozen cities across the United States. The anti-Jewish, anti-Catholic, anti-immigrant and anti-Black currents so prevalent in that decade were powered by a white supremacist belief that America was ordained by God as a promised land to be run by white, native-born, Protestant men.

This worldview was held not only by terrorist groups like the KKK, but was widely shared among Americans who could lay claim to being white. It was commonly legitimated in white Protestant pulpits, evangelical and mainline, South and North.

RELATED: How Christian nationalism paved the way for Jan. 6

This earlier form of white Christian nationalism was defeated, in part, by a movement of Catholic, Jewish and Protestant leaders who believed in a more open, inclusive America. As Kevin Schultz details in his book “Tri-Faith America,” the National Conference of Christians and Jews emerged in the late 1920s as a direct response to the KKK and quickly organized a host of interfaith activities across the nation.

Perhaps most importantly, they offered early 20th century Protestants — in the conjured phrase “Judeo-Christian” — a broader way of understanding the nation and their place in it.

To be sure, this term had its shortcomings: “Judeo-Christian” had no historical referent nor theological pedigree; it was limited to religions that could be located within Protestant understandings of their Bible; and despite the semantic equality of the two adjectives separated by a hyphen, it did little to blunt Christian supersessionism.

But the idea of a Judeo-Christian nation was nonetheless a powerful and important development. It opened the door to Jews and Catholics — many of them recent immigrants and largely poor — welcoming them as members of the American religious landscape. It redrew white Protestants’ mental maps of America.

As Thomas Jefferson understood, a democracy is not established once for all time. Each generation must recommit itself to renewing its institutions and affirming its principles, to defending the hard-won victories of the past against threats in the present. It’s not surprising that we find ourselves today, once again, facing down regressive white Christian nationalist forces. 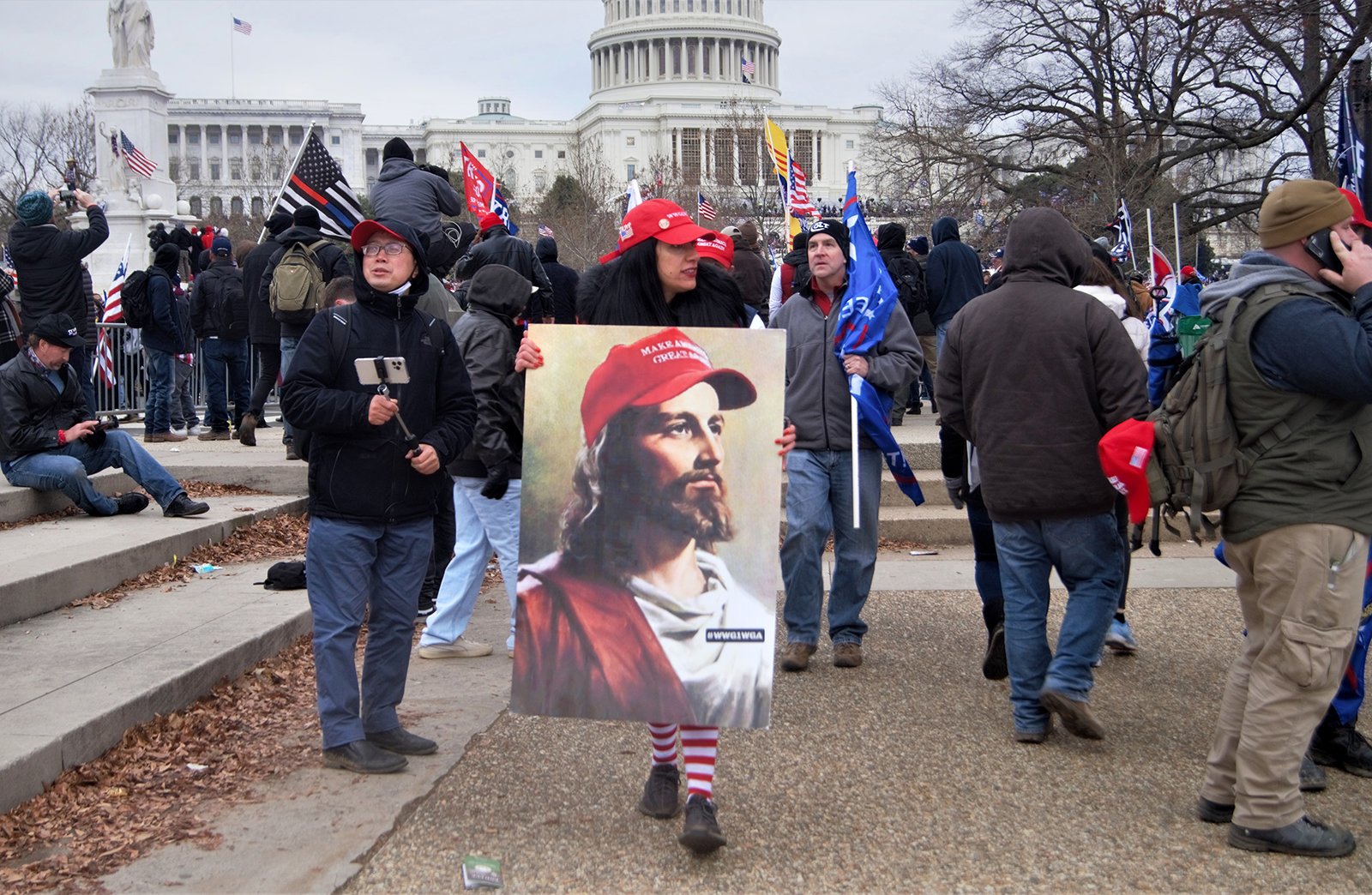 A recent report by the Baptist Joint Committee and the Freedom From Religion Foundation demonstrates that the Jan. 6 insurrection is part of a broader white Christian nationalist movement that sees itself as reclaiming the country. According to a 2021 PRRI survey, while only 30% of Americans agree that “God intended America to be a new promised land where European Christians could create a society that could be an example to the rest of the world,” that number rises to dangerous levels among groups comprising the conservative base in U.S. politics, including majorities of Republicans (53%) and white evangelical Protestants (52%).

Moreover, white Americans who embrace this white Christian nationalist version of history are more than four times as likely as those who disagree to believe that “true American patriots may have to resort to violence to save the country” (43% vs. 10%).

The tools past generations used to protect democracy are clearly insufficient for the work today. But we believe the current resurgence of white Christian nationalism, while deeply worrisome, may provide an opportunity for Americans to create an analogous paradigm shift to protect our democracy.

Jews and Catholics were the (relative) newcomers to the American civic landscape in the early 20th century. There were very few openly practicing Muslims, Hindus, Buddhists, Jains, Sikhs or Bahai’s in the nation at the time. And there were few who openly shunned religion altogether.

Over the last half-century, the American religious landscape has changed dramatically. Since the passing of the Hart-Celler Immigration Act of 1965, which did away with America’s long-standing Europe-first immigration policies, many other religious communities have immigrated, established themselves and grown.

RELATED: How Judeo-Christian is the US Constitution?

Today, there are as many Muslims in the United States as Lutherans — and twice as many Buddhists as Episcopalians. Moreover, the median age of Muslims, Hindus and Buddhists is some 20 years younger than that of white Christians.

This growing religious diversity impacts virtually every facet of American life. Muslim congregational prayer is Friday afternoon, not Sunday morning; this shift in traffic patterns will impact zoning considerations in many towns and municipalities as Muslims establish mosques.

Many Jains, Buddhists and Hindus are vegetarian; this will change what is served in the cafeterias of schools and businesses. And the pandemic was a reminder that Americans may seek the guidance of a wide array of religious leaders alongside their doctors on matters like whether to take a new vaccine.

Despite its limitations, “Judeo-Christian” did good work for more than half a century, moving us beyond a white Anglo-Saxon Protestant America. It was most certainly better to be a Catholic or a Jew in 1990’s America than in 1930’s America. Indeed, one measure of America’s progress is that, over the last century, the term’s usage has shifted from being an invitation by the left to embrace a more pluralistic future to a cry from the right to preserve a monocultural past.

Despite the loud, angry voices most visible in the media, data from a recent PRRI survey demonstrate that most Americans embrace these differences. Fully 7 in 10 Americans say they are proud to live in a religiously diverse nation.

Across our history, through the efforts of patriots in every generation, the United States has repeatedly found our way back from anti-democratic waves of white Christian nationalism. When we have succeeded, it is because we have clung to our best virtues rather than our worst instincts, our democratic principles rather than our tribal fears.

It’s time to say goodbye to “Judeo-Christian” America. But we can learn from its example — especially the way it creatively expanded our civic and moral imagination — as we write the next chapter in the great history of American religious diversity.

(Eboo Patel is the president and founder of Interfaith America. His latest book is “We Need to Build: Field Notes for Diverse Democracy.” Robert P. Jones is president and founder of Public Religion Research Institute. His most recent book is “White Too Long: The Legacy of White Supremacy in American Christianity.” The views expressed in this commentary do not necessarily reflect those of Religion News Service.)