(RNS) — One of the most important and difficult questions among those who study religion and politics is just how important a pastor, rabbi, imam or other religious leader is when it comes to shaping the worldviews of their congregation. These figures get a weekly chance to dominate the attention of the people who come to listen to their sermons. They have a nearly unique opportunity to mold their congregants’ view of the theological, social and political world around them.

How often do pastors actually use that opportunity to speak out about the pressing issues of the day? Some new data gives us a look.

A Pew Research Center poll fielded in March of 2021 asked people if they had heard sermons that contained references to the fallout from the 2020 presidential election in the previous month. The survey asked about four topics specifically: the possibility that the 2020 election was rigged, former President Donald Trump’s inaccurate statements about election fraud, as well as support for or opposition to those who stormed the U.S. Capitol on Jan. 6, 2021.

The question was put to those who had heard sermons delivered in person, online or on television. At the time of the poll, just 18% of the sample indicated that they had returned to in-person worship.

The results of the poll are most interesting when broken down by the political partisanship of the person hearing the political discussion.

Democrats, the poll found, were just as likely as Republicans to hear the winner of the presidential election mentioned from the pulpit. However, when asked if their pastor had called Trump out for making false statements about election fraud, Democrats were nearly three times more likely to answer affirmatively compared with Republicans (20% vs. 7%). 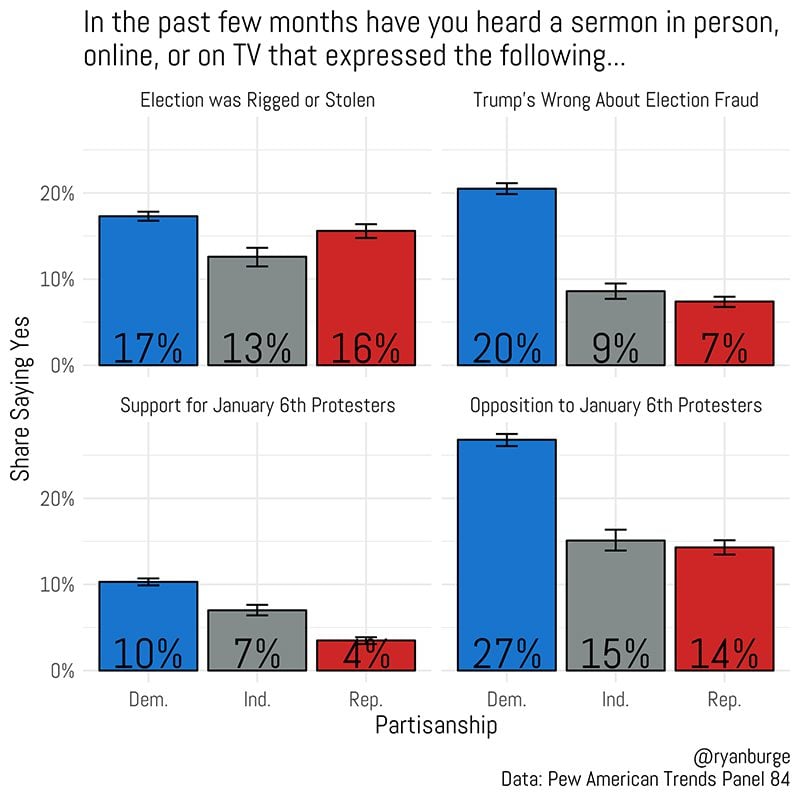 On the subject of the Jan. 6 insurrection, Democrats were more likely to have heard messages either supporting or opposing the actions of those who breached the Capitol. Ten percent of Democrats said they had heard a sermon where the protesters were praised for their actions, compared with just 4% of Republicans. Yet 27% of Democrats said that they heard a pastor denounce the actions of those protesters on Jan. 6 — twice the share of Republicans at just 14%.

It’s notable that in both cases, Democrats were much more likely to hear Jan. 6 addressed than Republicans. But it’s crucial to point out that pastors were two to three times more likely to deliver messages opposing the insurrection as ones supporting those actions.

Those who study political and religious messaging are always attuned to something called the selection effect: Here, it would refer to people selecting which house of worship to attend. Americans are neither forced to attend services, nor are they randomly assigned to different houses of worship. They decide where they want to go.

According to a spate of research in recent years, politics, perhaps unsurprisingly, is driving this decision-making process. Republicans tend to gravitate toward more conservative churches, while Democrats are dropping out of religion entirely or heading to places offering a more liberal religious tradition.

The Pew survey asked respondents to rate President Joe Biden and Trump using a scale running from zero (meaning very cold) to 100 (meaning very warm), with 50 being a neutral position on the scale. It’s possible that those who felt more warmly toward Trump were more likely to hear religious messages that praised the actions of those on Jan. 6 and less likely to be exposed to sermons that opposed the protesters’ actions. The opposite may be true as well; those who felt warmly toward Biden would hear more religious messages that condemned those who stormed the Capitol. The data tells a nuanced story. Those who felt warmly toward Biden were no more likely to hear sermons criticizing the Jan. 6 attack than those who felt very cool toward the current president. On the other hand, among those who scored Trump a zero on their political thermometer, nearly 30% had heard sermons that denounced the protesters on Jan. 6.

Among those who felt the most warmly about Trump, just 10% heard disparaging comments from pastors about the insurrection. This is evidence that Trump’s most ardent supporters are purposefully steering clear of communication that could contradict their political opinions.

Looking broadly, it’s clear that pastors were, generally speaking, more likely to criticize the actions of those people who stormed the Capitol. Yet, those messages were primarily being heard by those who already disliked Trump. Those pastors were, as they say, preaching to the choir.

RELATED: Could Republicans be softening on same-sex marriage? Don’t bet on it.

Congregational leaders often get a sense of the political leanings of their congregation and know when to steer clear of divisive issues. That explains both why Trump’s most ardent supporters were less likely to hear messages that opposed Jan. 6 but also why so few people heard positive messages about the actions of the insurrectionists.

In both cases, the pastor had little to gain by speaking up, so avoiding the issue became the best way forward.

The most interesting statistics of all from this survey may be this: Among those who reported going to church or watching a service online in the past month, three-quarters reported hearing no mention of Trump, a stolen election or the Jan. 6 incident in a sermon. Political speech is rare, and when it is invoked, it’s almost always done in an environment where the pastor knows it will receive a warm reception.