COLUMBUS, Ohio (RNS) — “On behalf of all of those in the ELCA involved in what happened that day, I apologize to the people of the community of Iglesia Luterana Santa María Peregrina,” Bishop Elizabeth Eaton, presiding bishop of the Evangelical Lutheran Church in America, said on Tuesday (Aug. 9).

It was an apology members of the small Latino Lutheran church in Stockton, California, had been waiting for for eight months — since the former bishop of the ELCA’s Sierra Pacific Synod removed their pastor as the congregation prepared to celebrate the Feast of Our Lady of Guadalupe last December.

“The lack of proper procedure and the intentionality of culturally insensitive actions announcing Pastor Nelson Rabell-González’s termination on that day — the Vigil of Our Lady of Guadalupe — was a sharp assault on your dignity,” said Eaton, as representatives of the denomination gathered for its Churchwide Assembly in Columbus, Ohio.

RELATED: Why the largest US Lutheran denomination is apologizing to a Latino congregation

Eaton also apologized for what came after Rabell-González’s removal, and how it “contributed to the trauma experienced when your voices and those of others were not listened to.”

It took three months for the presiding bishop to create a listening team to look into what had happened at the church, then known as Misión Latina Luterana. After receiving the listening team’s report, she requested the resignation of the bishop of the Sierra Pacific Synod, Megan Rohrer.

Four representatives of the church — Tony Castro, Bertha Castro, Rodolfo Limo and Jovita Torres — joined the presiding bishop onstage to receive her apology. Afterward, they spoke on behalf of the congregation, Torres in Spanish and Bertha Castro in English. 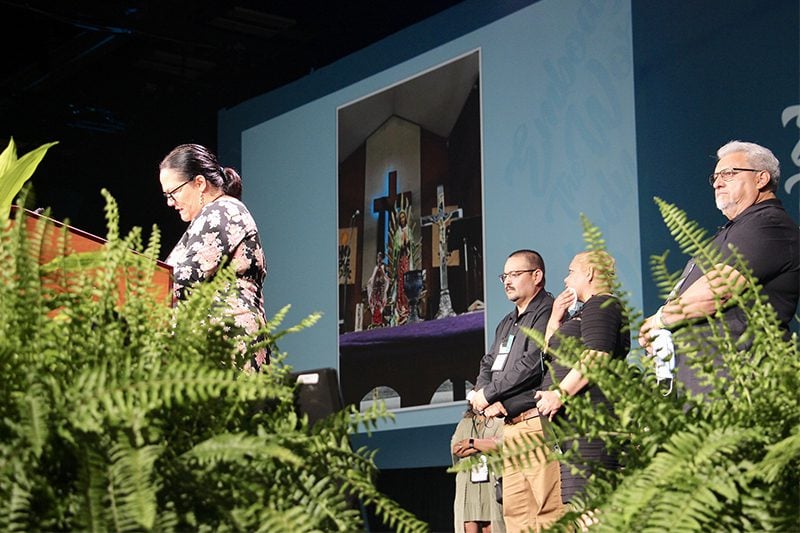 Bertha Castro told the assembly that the congregation believed the apology was “an important step towards recognizing the wrongdoings of this church body and hopefully avoiding any further harm to vulnerable communities of our church, particularly to fellow siblings of color.”

Appearing at the denominational meeting wasn’t an easy decision, she said, after the pain of the last nine months, in which the pastor and the congregation have been victims of racist actions at all levels of the denomination.

“However,” she said, “we believe in forgiveness, reconciliation and reparations. We hope that this public apology is only the first step of many in our community journey to dismantle systematic racism in this church.”

The congregation extended forgiveness to Eaton for her slowness to act after the service on the Feast of Our Lady of Guadalupe. It forgave Eaton for not immediately acting on the recommendations of the listening team. It forgave her for not making sure they had pastoral care through such a difficult time.

“We will also continue to pray for you, hoping that — every single day — God grant you the courage, strength and wisdom to lead this church body to dismantle systemic racism and white supremacy,” Bertha Castro told the presiding bishop. Members of the Iglesia Luterana Santa María Peregrina receive an apology on behalf of their congregation during the ELCA Churchwide Assembly at the Greater Columbus Convention Center in Columbus, Ohio, Aug. 9, 2022. RNS photo by Emily McFarlan Miller

They also will continue to pray for the journey ahead for the denomination, for Rohrer and for the Sierra Pacific Synod Council.

“In Christian love, we await for them to be held accountable for their actions, and to hear about concrete actions of reparation for our community and our pastor,” they said.

And they asked for prayers for Rabell-González, as well as an investigation into the complaints against him that led to his abrupt removal. The Sierra Pacific Synod Council has said it received “communications of verbal harassment and retaliatory actions” by the pastor, which he has denied.

“Our presence here today is our commitment to continue to be a community of Latiné Lutherans who embody the Word made visible in Jesus, who confronted injustice with understanding, who met derision with forgiveness, who overcame hate with love,” Bertha Castro said.

“We look forward to seeing how the ELCA and the Sierra Pacific Synod will embody your words moving forward.”

Members of the assembly gave the representatives of the congregation a standing ovation after they spoke. Eaton embraced each representative in turn, thanking them.

Roberto Lara, president of Asociación de Ministerios Latinos de la ELCA and a member of the listening team, said he believed the apology was an “important first step in our journey towards dismantling racism in our church.”

Getting there wasn’t always easy, Lara said. Part of his role is supporting the presiding bishop, he said, “and sometimes support means telling you that you’re making a mistake.” 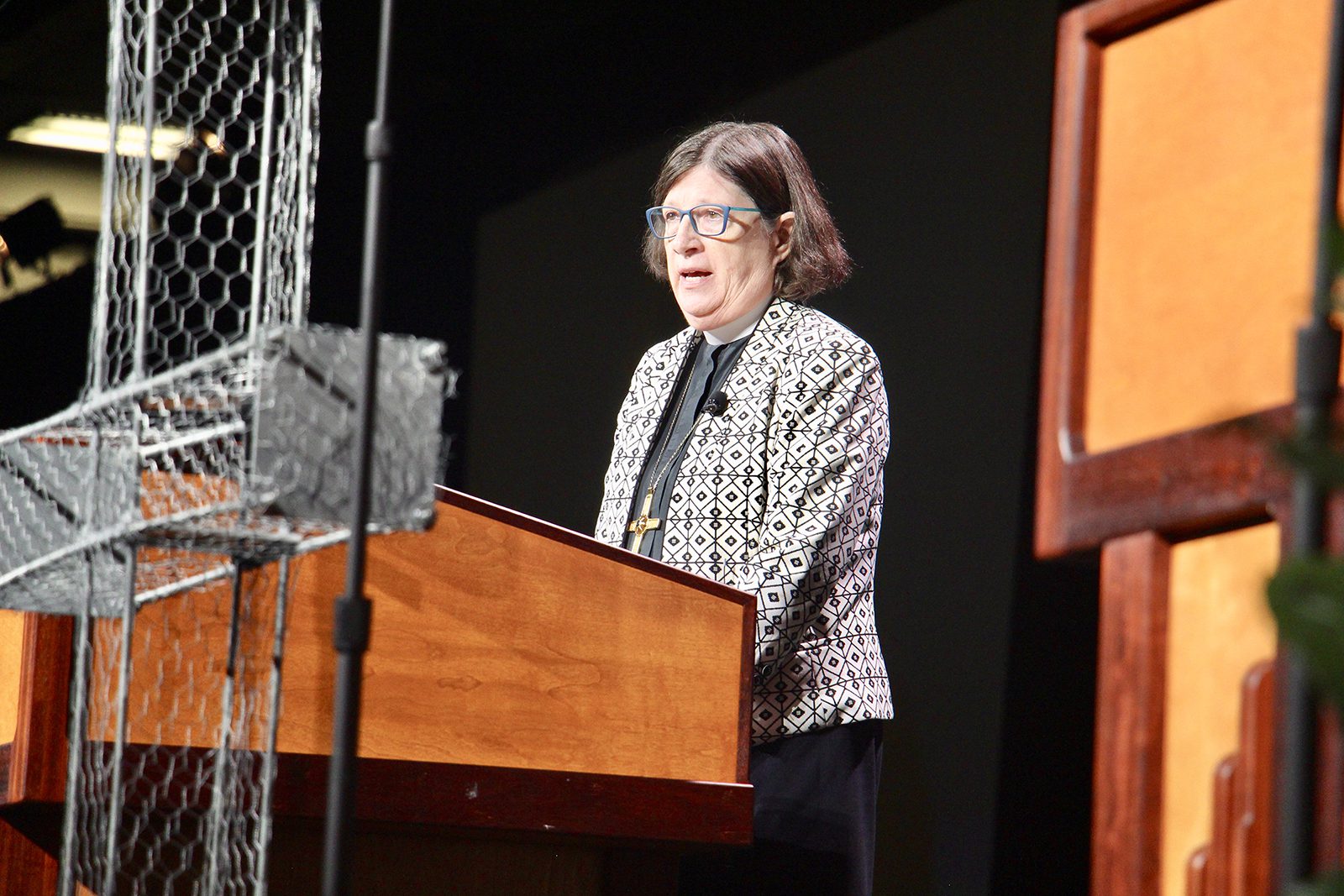 Lara said he was encouraged that Eaton had listened and “changed direction almost immediately” when the listening team called her out for initially failing to make the team’s report public and for not immediately pursuing discipline against Rohrer.

He also was encouraged to hear her acknowledge the requests the congregation has made in her remarks. Those requests include not only a public apology, but a place to worship, an investigation into the complaints against Rabell-González, emotional and pastoral support for the congregation and a revision of ELCA policies and procedures, according to a report by Asociación de Ministerios Latinos de la ELCA.

“The past couple of months have been very destructive and difficult for our church, but I believe that’s necessary. It’s necessary to be a little bit uncomfortable when you’re talking about racism and when you’re really trying to change your processes and procedures, to make sure the communities of color and marginalized communities, also the LGBTQIA community, are protected,” Lara said.

“I’m expecting that a lot of the conversations this week are going to be very uncomfortable, but I think that it will help us to move forward and to become the just and welcoming church we really want to be.”

The Rev. Haydee Colon Hernandez, pastor at Mision Pan De Vida in Passaic, New Jersey, came to Churchwide Assembly with a small group from the East Coast — not as a voting member of the assembly, but as a supporter of the congregation of Iglesia Santa Maria Peregrina, she said.

Colon Hernandez handed out pins with an image of Mary and the words “Now is the time to right the wrongs” as people entered the hall for the assembly Tuesday morning. At a reception hosted by Asociación de Ministerios Latinos de la ELCA that evening, she wore hers alongside a small gold medal of Our Lady of Guadalupe.

The mood was celebratory.

“What happened with Santa Maria Peregrina basically brought to light the injustices that are happening to Latine congregations. We are happy that the apology was presented,” she said.

Colon Hernandez said it was important for her to hear the presiding bishop recognize the racism that exists in the ELCA in her apology.

She also was glad to hear members of the congregation of Iglesia Luterana Santa Maria Peregrina name the ways they had been hurt by the denomination.

“I trust that the Holy Spirit continues to guide Bishop Eaton and the ELCA to really be a church that is inclusive — that takes us into consideration and also our culture — because if our culture is not accepted, then we are not accepted,” she said.