WASHINGTON (RNS) — U.S. Rep. Marjorie Taylor Greene of Georgia has spent much of the summer calling on her fellow Republicans to become the “party of Christian nationalism,” even selling T-shirts emblazoned with the slogan “Proud Christian nationalist.” Speaking at the Conservative Political Action Conference’s meeting in Texas Aug. 5, she said the Christian nationalism label is nothing to be “ashamed” of and encouraged other members of her party to “lean in to biblical principles.”

Two other Republican politicians have disputed the principle of the separation of church and state. In late June Colorado Rep. Lauren Boebert, speaking at the Cornerstone Christian Center in Basalt, Colorado, proclaimed she is “tired of the separation of church and state junk that’s not in the Constitution.” Pennsylvania gubernatorial candidate Doug Mastriano referred to church-state separation as a “myth” in a speech earlier this year.

Religion News Service reached out to more than 50 House and Senate Republicans seeking their response, questioning whether they support calls to make the RNC the party of Christian nationalism. The list ranged from hardline conservatives to more moderate Republicans who recently voted to codify the legalization of same-sex marriage into federal law.

Lankford, a stalwart conservative and Southern Baptist who earned a master’s of divinity from Southwestern Baptist Theological Seminary and still occasionally performs marriage counseling and weddings, answered by locating the separation of church and state in the Constitution. “I took an oath to defend the US Constitution which states, ‘Congress shall make no law respecting an establishment of religion, or prohibiting the free exercise thereof,’” Lankford said in a statement. “While my personal faith is firmly in Jesus Christ, our nation protects the right of each person to choose any faith, change their faith, or have no faith. That has been true from George Washington to the present.”

Mace, who attends services at Sea Coast Church in Mount Pleasant, South Carolina, also attributed the principle to the founders of the federal government.

“The Republican Party has room for anyone that believes in the fundamental principles of limited government, federalism, and keeping taxes low for all Americans,” read her statement. “Our founders designed a nation that explicitly maintains the separation of Church and State, something which should continue to be a guiding principle of our Republic.”

A representative for Rep. Darrell Issa of California also responded, but only to convey that the spokesperson was “totally unfamiliar” with Boebert and Greene’s rhetoric. When House members voted to strip Greene of committee assignments in 2021, after old social media posts showed the congresswoman espousing conspiracy theories and antisemitic and anti-Muslim ideas, Issa was one of the few lawmakers to come to her defense, arguing members should not be judged for things done before taking office. 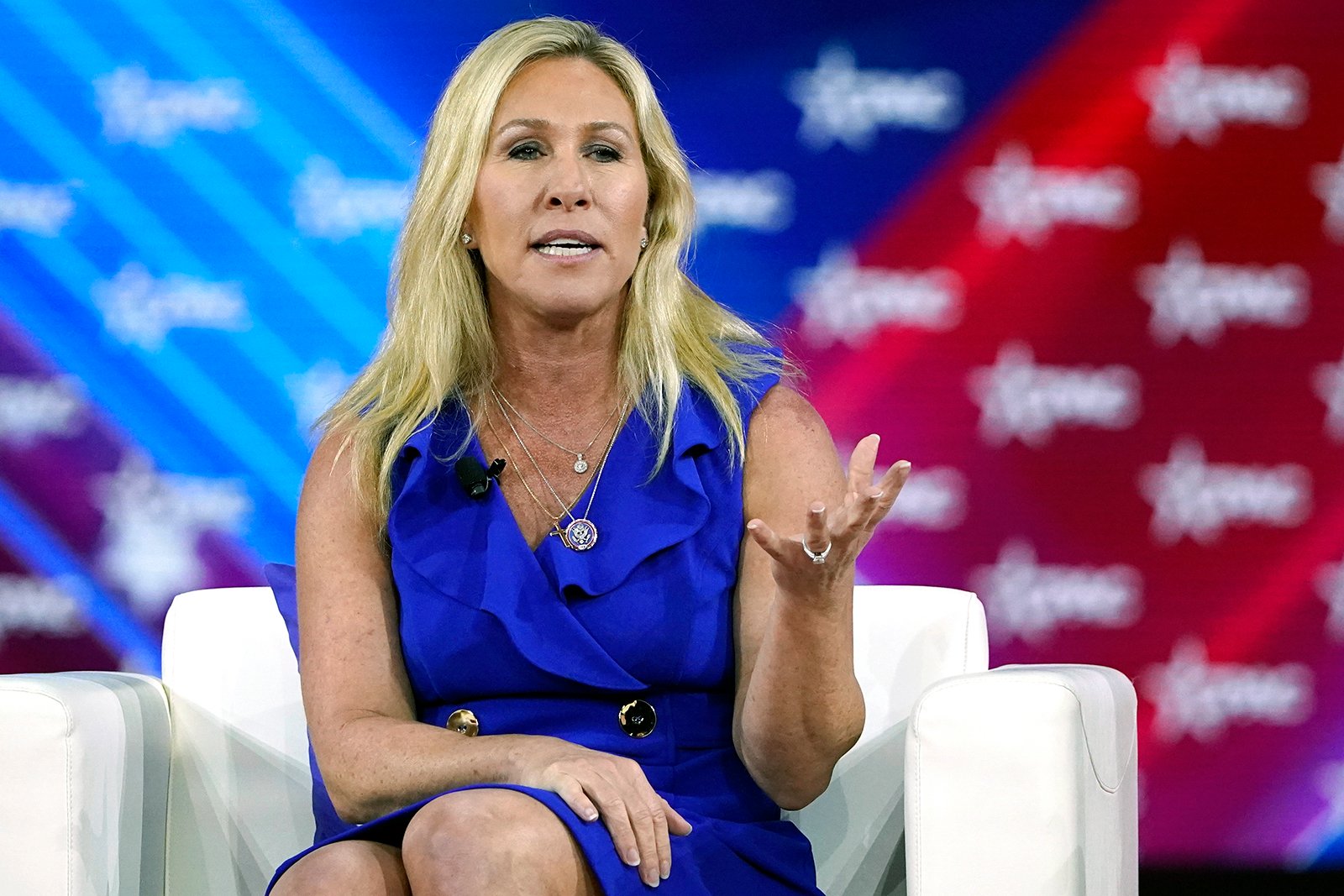 Elizabeth Neumann, who resigned from the Trump administration in April 2020 after serving as assistant secretary of counterterrorism and threat prevention at the Department of Homeland Security, attributed Republicans’ reticence about Christian nationalism partly to a shift under President Trump that legitimized allegiance to Christian nationalist ideas as a pillar of Republicanism.

“Trump said in a 2018 speech that he’s a nationalist, so if you’re a really big Trump supporter, then think of yourself as a nationalist, too,” Neumann said. “So the idea that you’re merging Christian values with nationalism, it’s not a big leap.”

As a result, she added, “Elected officials are afraid of their base.”

Her view is supported by a 2021 Pew Research survey, in which “Faith and Flag Conservatives” — a category Pew researchers call the organization’s attempt to assess hardline Christian nationalist views — make up 23% of those who identify themselves as Republican or lean toward the party. Faith and Flag Conservatives also reported the highest political activity of any conservative group, suggesting an outsize influence on GOP politics, likely including party primaries. 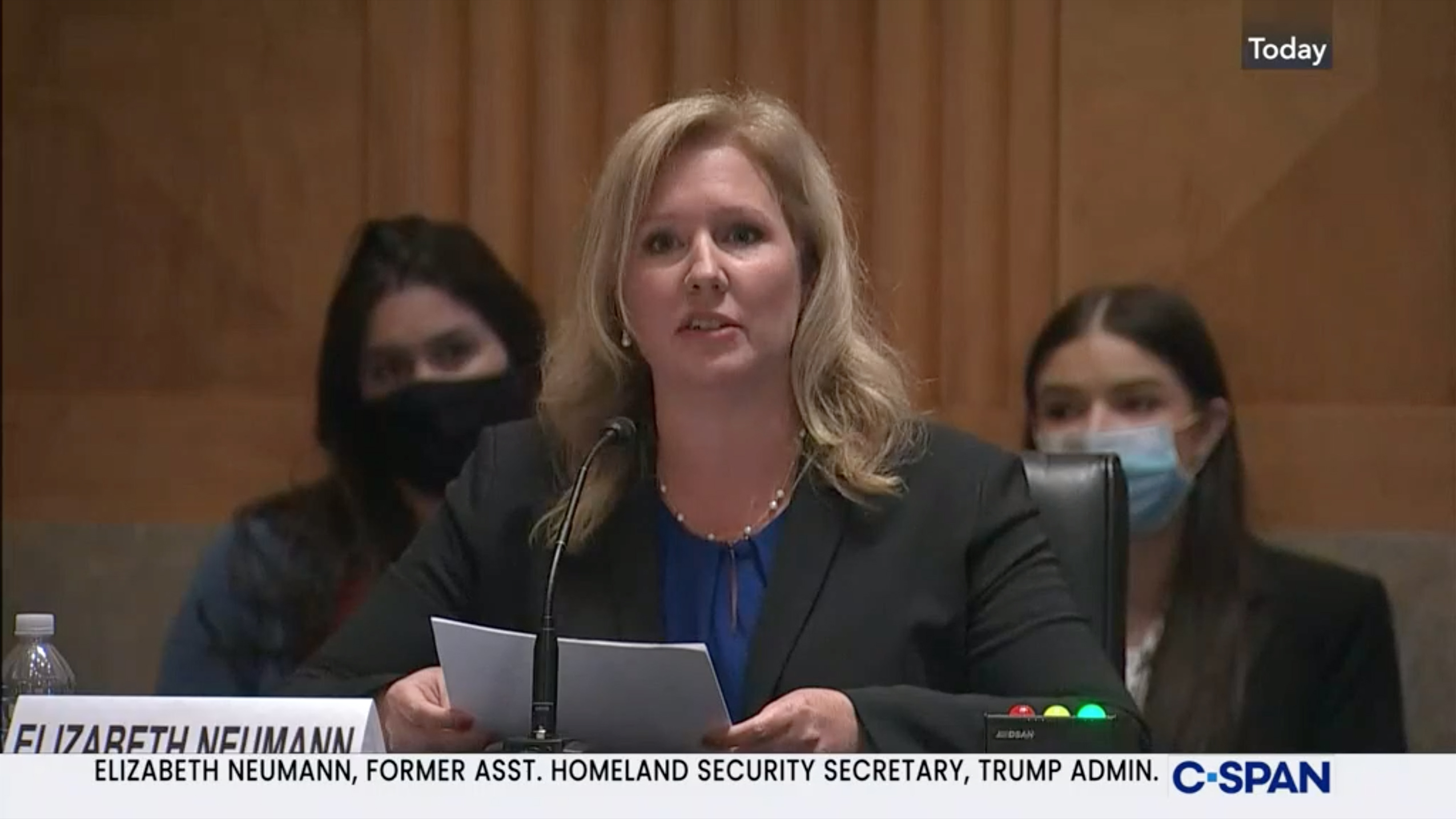 Neumann, who now works at the extremism analysis organization Moonshot CVE, said Republican silence is part of a larger pattern of conservatives demurring when presented with opportunities to condemn extremism, which can accelerate radicalization.

RELATED: The activist behind opposition to the separation of church and state

“You can do a whole lot before somebody has really radicalized,” Neumann said. “The key is early intervention, and the fact that you have lawmakers not willing to speak truth — whether it’s about an election, whether it’s about an FBI raid, or about Christian nationalism — it is allowing their constituents to be vulnerable to jargon, darker elements, persuading them to move into extremism.”

She added: “When leaders do not lead, there is a cost.”

Brian Hughes, co-founder and associate director of the Polarization and Extremism Research and Innovation Lab at American University, agreed. “When they fail to speak out against this, they’re surrendering the future of their party to the Marjorie Taylor Greenes of the world,” he said.

Some Republicans have made it a point to speak out. “I oppose the American Taliban,” Rep. Adam Kinzinger of Illinois said in a series of tweets posted in recent weeks, referring to Greene’s rhetoric. Kinzinger, who is not seeking reelection, tagged House Minority Leader Rep. Kevin McCarthy’s Twitter handle followed by a question mark. 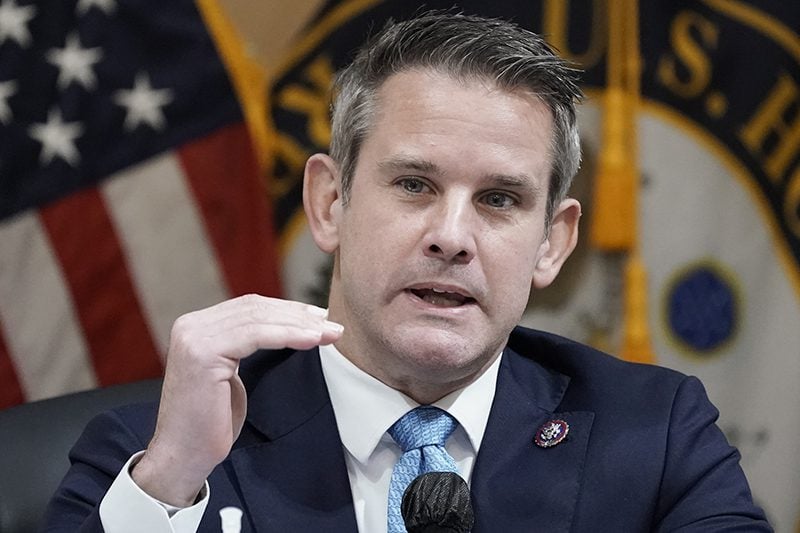 Russell Moore, the former head of the Southern Baptist Convention’s public policy arm and the newly named editor in chief of Christianity Today, who counts Kinzinger as a friend, said, “If anything, Adam is becoming more and more vocal, and will be in the years to come.”

According to Hughes, Trump’s loss of the White House as a bully pulpit has resulted in opportunistic extremist voices pivoting to Christian nationalism as a way to expand their influence on the Republican Party.

“Rather than a recruitment tool that’s bringing mainstream folks to the extreme,” he said, “what it’s actually more effective at doing is injecting the mainstream with extreme ideas.”

In the aftermath of the Jan. 6 insurrection at the U.S. Capitol, right-wing figures such as Andrew Torba, head of the social media website Gab, a haven for extremists, and Nick Fuentes, the leader of America First, began ramping up their religious rhetoric and identifying as Christian nationalists. 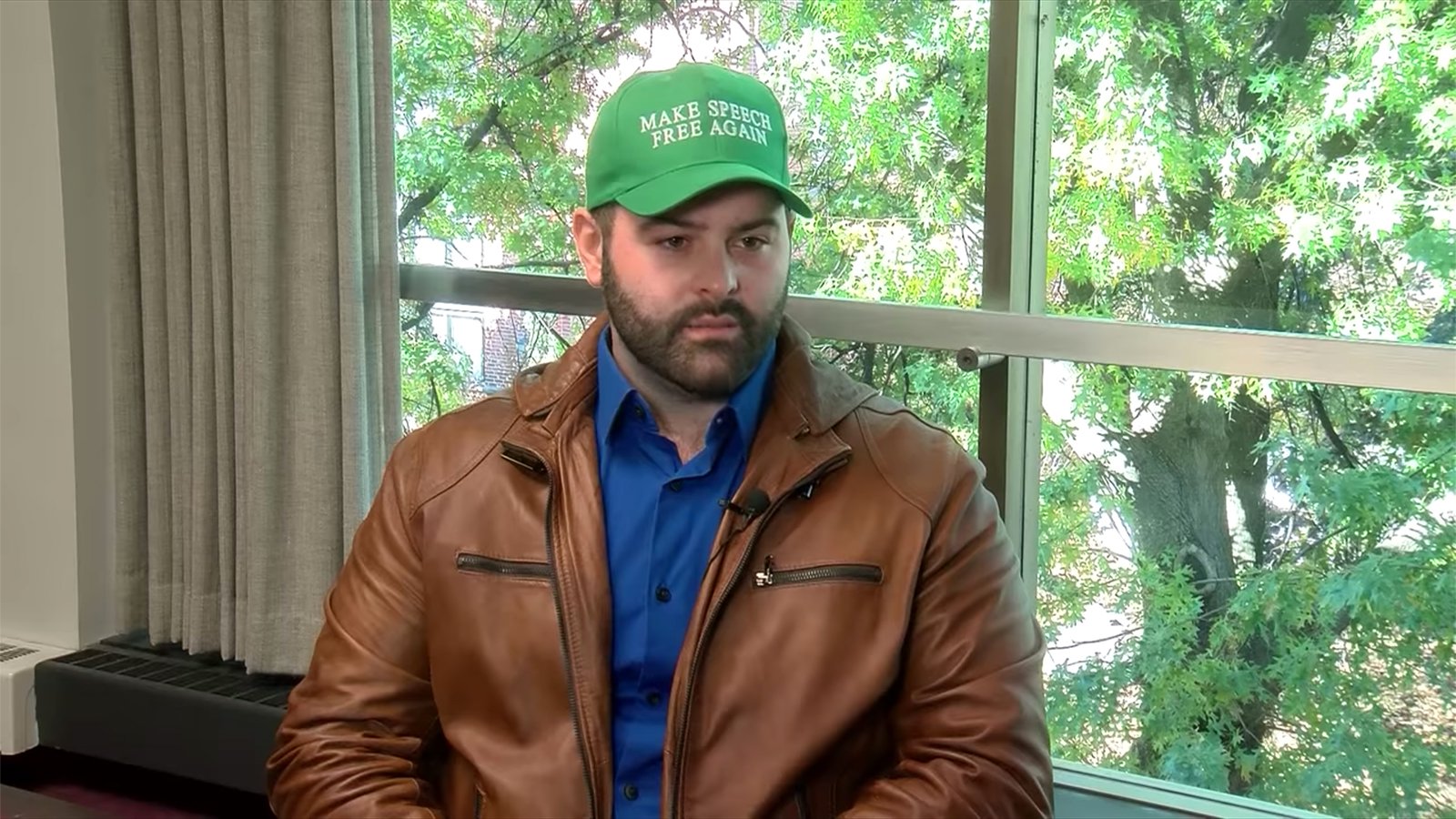 Andrew Torba in a 2018 interview. Video screengrab via Youtube/PAHomepage

In a recent email exchange with Religion News Service, Torba claimed he is preparing to unveil a new book on Christian nationalism titled “Christian Nationalism: A Biblical Guide For Taking Dominion And Discipling Nations,” saying the book would be “distributed by us to every church in the nation,” though he did not name a publisher and declined to list a release date.

Mastriano made use of Gab during his primary campaign, reportedly paying the platform $5,000 for “campaign consulting.” Torba has disputed the characterization, describing the transaction as more of an ad buy. Mastriano has since deleted his Gab account from the platform, saying Torba “doesn’t speak for me,” and condemned antisemitism while declining to condemn Torba himself. 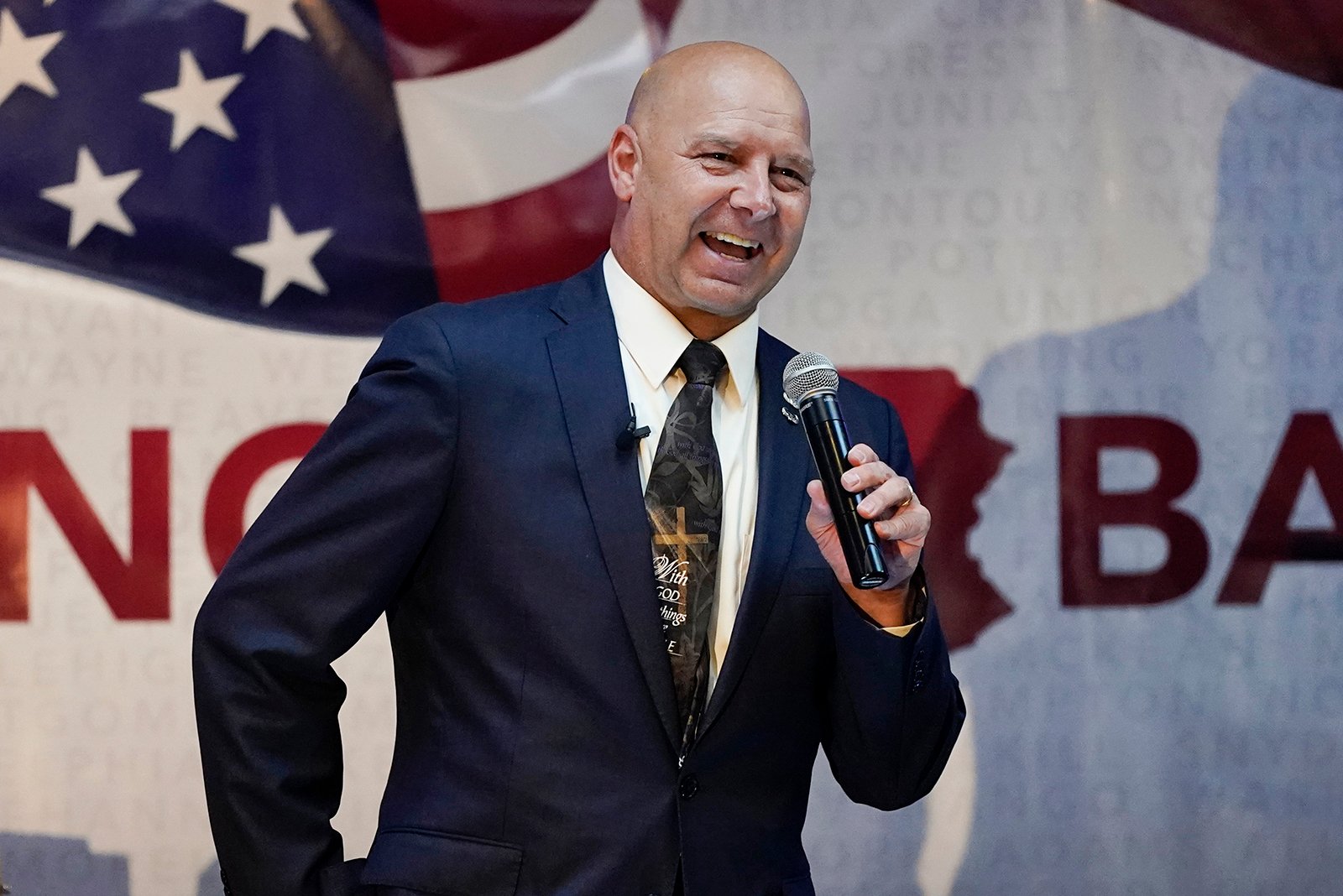 Meanwhile, Greene spoke alongside Torba and others at Fuentes’ AFPAC conference in Florida, where she opened her remarks by invoking her faith.

Fuentes, who is Catholic, declared his desire in June to “impose Christian laws on everyone” in the U.S.; he insists “there should only be Christian countries” and has celebrated the idea of a “Catholic Taliban rule in America.”

Greene maintains she doesn’t know Fuentes and wasn’t aware of his views when she spoke at his conference. But her rhetoric seems to have emboldened extremist voices such as Fuentes, who lauded her invocation of Christian nationalism.

“That’s the first time that I’ve ever heard a politician really say something that on the money about where the American right wing needs to go,” he said in a recent livestream, referring to Greene’s remarks.

Torba, for his part, has continued to convey both avid support for Christian nationalism and a desire to influence Republican politics.

“We are the GOP now,” Torba wrote on Gab this week. “Get used to it or get out of the way.”

Protestant
A ‘missionary to Christian nationalists,’ Phoenix pastor urges conversion, not confrontation
Follow us on Facebook!
Submit your photos to RNS