(RNS) — I’ve been thinking a fair amount lately about the rising numbers of Latter-day Saints who are questioning their faith or leaving it altogether, the topic of the book Benjamin Knoll and I are working on — which has led me to think too about how The Church of Jesus Christ of Latter-day Saints handles those people’s needs — sometimes wisely and pastorally, but all too often judgmentally.

There are many reasons for this. A major one is that the church tends to elevate people to leadership who haven’t questioned their faith, LDS history or its leaders — or at least those who haven’t raised those doubts openly. This creates and reinforces a culture that cherishes obedience to authority over many other potential values.

The church also tends to misunderstand, infantilize and even demonize those who question. Ironically, this overreaction often has the opposite effect of the one the church is hoping for, pushing people toward a full-blown faith crisis and a possible exit from the pews. Had they felt their doubts were understood and respected, they might have stayed. By communicating that doubt is to be avoided, the church also conveys that doubters are to be avoided, and those who question their faith feel it keenly.

If you’re questioning your Mormon faith but aren’t sure there’s a place for you anymore, this is a column for you. I want to tell you three things: You’re not crazy, you’re not wrong and you’re not an apostate.

Have you ever been to a butterfly farm? I got to visit one a few years ago, and I highly recommend the experience. If you’re lucky, you’ll have a knowledgeable guide who geeks out when describing the various stages of butterflies’ metamorphoses.

We all know that story from grade school: A fuzzy caterpillar goes on a food bender and gets fat, decides to shelter in place by building itself a hammock-like cocoon to hang out in for a while and then emerges a couple of weeks later having conveniently grown wings. What was once a plain caterpillar— which, let’s face it, looks like an underwhelming worm with fur — has transformed almost beyond recognition into a colorful, stunning creature who boldly flies away. 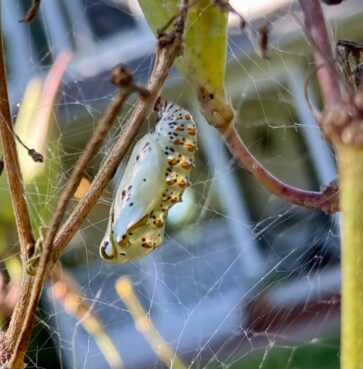 A chrysalis on milkweed, Aug. 14, 2022. Photo by Angela Black, used with permission

Except that’s not the way it happens. The real story is disgusting.

What happens inside that cocoon is not for the faint of heart. According to Scientific American, “the caterpillar digests itself, releasing enzymes to dissolve all of its tissues. If you were to cut open a cocoon or chrysalis at just the right time, caterpillar soup would ooze out.”

Did you catch that? It’s not that a caterpillar just spins a cocoon for a quick upgrade, like Clark Kent ducking into a phone booth for a moment before rematerializing as Superman. No, this is like Clark Kent goes into the phone booth and eats himself entirely to make a nice juicy primordial soup. Only then is Superman constructed out of the remaining raw materials.

It’s gross, and also fascinating and beautiful. I’ll never look at butterflies — or caterpillars — quite the same way again.

It’s an intriguing metaphor for a faith crisis. When you’re in one, it feels like everything you thought you knew, the solid matter you could rely on, has been liquefied. There’s nothing to hold onto. You recognize little of your former self, that caterpillar who happily stayed on the same plant or tree, never straying, contented to munch away. Now it feels like you’re straining for something more, but you’re not sure what, and the straining is not necessarily your choice.

There’s a part of you that wants to revert back to your simpler caterpillar days, and another part, a stronger part, that keeps holding everything about your old faith up for reexamination.

A faith crisis can feel devastating and eviscerating when you’re in the throes of it. So bad, in fact, that it’s easy to believe criticisms from orthodox believers who say you brought this pain upon yourself — that this is happening because you didn’t pray enough or go to the temple enough or study the Scriptures enough. (And it’s true that you probably didn’t; who does? Is there an agreed-upon, objective “enough” measure that would have put you over the top?)

It can be hard to believe, when you’re in the worst of this experience, that you’re not crazy, not wrong and not apostate. That you’re in a natural chrysalis, headed for something deeper. Something more.

It’s natural at different points of your life to outgrow your old faith, or to doubt certain parts of it. Your old faith, like the caterpillar’s body, used to serve you well, until suddenly it didn’t. This could happen once, and it could happen several times. Some people never experience it, or they are so fearful of the possibility of change that they fight it tooth and nail.

Rather than being afraid of this transformation — or expending the considerable energy it takes to stop it from happening — it helps to simply accept it as one particular stage in your evolution. An attitude of acceptance, even welcome, can keep the natural process of outgrowing your faith in perspective. It’s neither good nor bad, inherently; it just is.

Some people do leave the church after a faith crisis. Others, like me, choose to stay. (This is where the caterpillar-to-butterfly metaphor breaks down: Butterflies don’t stay put after their adult transformation and can in fact migrate for hundreds or even thousands of miles. There’s no law that says you can’t opt to remain in Mormonism with a faith transformed.) Rather than focusing right now on a particular outcome, just notice the changes that are happening to you, and marvel.