NEW YORK (RNS) — A statue of Mahatma Gandhi outside a Hindu temple in Queens was vandalized for the second time in three weeks, leading the New York Police Department Hate Crimes Task Force to open an investigation into “criminal mischief.”

The statue outside the Shri Tulsi Mandir in the South Richmond Hill neighborhood was defaced and pushed into a planter on Aug. 3. Early in the morning of Aug. 16, six men, ages 25 to 30, were spotted smashing the “religious statue” with a sledgehammer and spray-painting the word “dog” in English and Hindi on the Mandir grounds and on 111th street, according to the task force.

“The New York City Police Department is asking for the public’s assistance in ascertaining the whereabouts of the individuals depicted,” said a task force spokesperson, “and are wanted for questioning in connection to a criminal mischief incident that occurred within the confines of the 106th Precinct.”

The task force posted snapshots from CCTV footage on Twitter of the Aug. 3 incident, but a police spokesperson said that investigators did not confirm whether the two attacks were related.

On Thursday night, the Cityline Ozone Park Civilian Patrol stood guard outside of the mandir as community members gathered to show their support. Following the incident, the civilian patrol said it will “increase their presence around the Mandir along with the 106th precinct.” They will also “remove the graffiti once permitted by the police.”

“This is not the first time something like this has happened, and it must stop,” said the Civilian Patrol in a statement. “We must work together to send a clear message that hate crimes towards any religion will not be tolerated.” 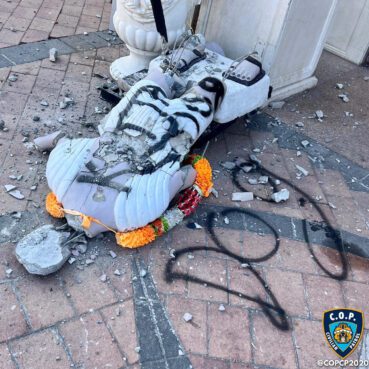 Hindu organizations in the state are certain both incidents exhibited anti-Hindu hatred. The Coalition of Hindus of North America pointed to a “deadly combination of widespread ignorance” and “targeted hate and stereotyping.” They pointed to other desecrations of Gandhi statues around the country, including a statue defaced in Union Square in Manhattan in February.

“The attacks on the statue of Mahatma Gandhi in Queens are just the latest in an escalating and disturbing trend of anti-Hindu hate that we have seen escalate over the past few years,” said a spokesperson for the organization. “As one of the best known visibly Hindu figures in the West, statues of Gandhiji and Hindu Mandirs end up facing the brunt of this hate.”

The Hindu American Foundation, an educational and advocacy nonprofit, released a statement today condemning both incidents.

“The violent attack on a statue of Mahatma Gandhi, at a Hindu temple no less, was meant to instill fear in the Queens community and send a message that Hindus are not safe to worship however or respect whomever they choose — the very definition of a hate crime,” stated Suhag Shukla, the foundation’s executive director.

“Gandhi said, ‘Hatred can be overcome only by love,’” said Rajkumar, who last week hosted a press conference with other lawmakers in front of the Mandir. “With the support we have received all around Queens, the city, the country, and the world, I am more optimistic than ever that we will succeed in defeating these forces of hate.”

Mohandas K. Gandhi is credited with a campaign of civil disobedience that helped lead to India’s independence from British rule. The Hindu principles he drew from, including “ahimsa,” or non-violence, and “satyagraha,” or soul force, notably inspired the likes of Martin Luther King Jr. and Nelson Mandela.

The attack in Queens comes only one day after the country celebrated its 75th year of independence.