(RNS) — This is not the first time I’ve felt sacrilegious singing a Demi Lovato song.

When I was 14, the title track of the singer-songwriter’s debut album, “Don’t Forget,” was my jam, a fact I tried to hide from nearly everyone I knew. My community, primarily Black like me, seemed to listen exclusively to rap and R&B. My passion for a pop-rock bop — “white” music — would make me an oddity if anyone ever found out about it.

More importantly, I had heard enough Sunday sermons to know how weird it was for a boy to enjoy belting a song about a fading romance with a boy. One could call it strange. Queer, even.

Demi can relate. She has never been good at maintaining the image the industry expected of a former Disney Channel star. Her first stint in a treatment facility derailed the show she starred in (“Sonny With a Chance”). In 2018, Lovato came out as sexually fluid, and a year later as gender nonbinary. A few weeks ago, they said they were using the pronouns “she/her” again, in addition to “they/them” — explaining that she was feeling more feminine of late. Lovato knows how it feels to break the tenets of conventional society while all eyes are on you. 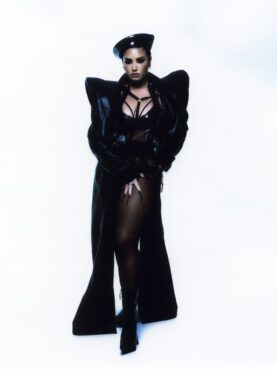 The older she gets, Lovato seems to become more herself, more assured of who she is and unafraid of showing it, no matter who gasps or makes the sign of the cross. Many of us manage this evolution, but when it’s an LGBTQ+ person who was raised Baptist, as Lovato was, their evolution seems nothing short of a miracle. Christians separate the world into the sacred and the profane, unfairly denying LGBTQ+ people the former, the better to categorize them as the latter.

The album revels in religious condemnation, with Lovato boasting about her “sinfulness.” “Prod me, laud me, ungodly but heaven sent,” she sings in the album’s opener, “Freak.” Embracing damnation isn’t a new concept in pop — Rina Sawayama’s summer bop “This Hell” challenges religiously motivated attacks on LGBTQ+ rights: “God hates us? Alright then! / Buckle up at dawn we’re riding.”

But Lovato’s brilliant wordplay and overt and also subtle allusions to the Bible make her interpretation fresh. “I’m just trying to keep my head above water / I’m your son and I’m your daughter / I’m your mother, I’m your father / I’m just a product of the problem,” Lovato sings in “Skin of My Teeth.”

“Skin of My Teeth” also takes on Lovato’s struggles with addiction and her freedom to move from one gender identity to another, reminiscent of the Trinity. The alcohol Lovato is afraid of drowning in is likened to a baptism, but here, there is no washing away of sins; here, the water is the sin. This pivotal act of Christianity is flipped.

The water imagery continues with the song “Heaven,” which takes a passage from the Gospel of Matthew — “And if your right hand causes you to sin, cut it off and throw it away; it is better for you to lose one of your members than for your whole body to go into hell” — and essentially responds, Nah, hell is better. “If pleasure’s wrong, cast me out like a sinner,” Lovato sings, “I found myself with my two little fingers. … My right hand’s got me singing my praises. Holy water and my spirit awakens.”

The album, as its title might suggest, joins Beyonce’s recent release “Church Girls” in giving us some of the most potent, sonic combinations of holiness and sex since maybe Prince.

“Skin of My Teeth” and the tracks “Eat Me,” “Holy Fvck” and “Feed” evoke the Last Supper, the body of Lovato broken for all at the table but with Lovato not as a savior but instead a sinner. “Cause my body’s the communion / Take a bite of what I’m doing,” she sings on “Holy Fvck,” which compares sex with her to the sort of enlightenment many call to God for. “I’ll show you the light with all the lights off … I’ll bring you to life,” as Jesus did Lazarus. 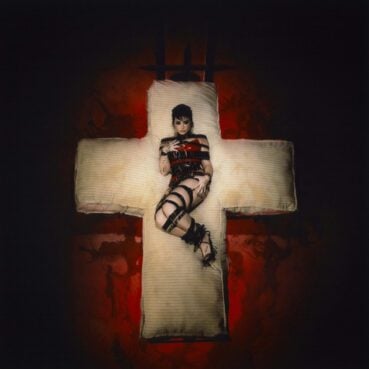 The album probably could bring the dead to life. It’s loud, full of heavy metal and screamo elements that take me back to the pop-rock/emo bands of my adolescence: Red Jumpsuit Apparatus, Evanescence, The All-American Rejects. “Holy Fvck” is reminiscent of the rage Fiona Apple captured in her 2020 album, “Fetch the Bolt Cutters.” Lovato’s album is more accessible, though, hewing closer to classic pop in its songs’ structures.

This should make “4 Ever 4 Me” — a ballad that wouldn’t sound out of place on Taylor Swift’s country-pop-rock “Speak Now” — less surprising. Promising a lover “forever” and “heaven” is practically a prerequisite for airplay for Lovato’s base. But “4 Ever 4 Me” is quieter than the rest of the album, less thunderous, and its emotional resonance benefits. Deeming her lover “beautifully made” (an echo of Psalm 139), Lovato sees her lover the way God sees the companion. The borders of the sacred and the profane are dissolved.

“I don’t believe in organized religion anymore,” Lovato told the Los Angeles Times in an interview about “Holy Fvck.” “My God is the universe. It’s so much bigger than me, or us.”

I won’t be surprised if “Holy Fvck” earns a nomination for Album of the Year Grammy. Though not a game changer sonically, it’s lyrically rich, shows Lovato to be more of a songwriter than I thought. She has come so far from “Don’t Forget,” a song that still “slaps,” as the youths say. “Holy Fvck,” her eighth and arguably her best album, makes me wonder if, had my adolescent self heard it, I would have been less inclined to believe I was destined for hell and more aware of my sacredness. I might have even quoted “Eat Me” to my critics. “I can’t spoon feed you anymore. You’ll have to eat me as I am.”

(Da’Shawn Mosley is an editor and journalist in the Washington, D.C., metro area. The views expressed in this commentary do not necessarily reflect those of Religion News Service.)