(RNS) — I am really, really starting to dislike the word “iconic,” especially because I overuse it. One of my resolutions for the coming year is to break that habit.

But, sometimes, it fits. I would eagerly attach the adjective “iconic” to singer-songwriter Craig Taubman. He is a veteran composer and performer of Jewish music, and not just Jewish music.

He is also not “just” a musician. He is a seeker and producer of meaning, and a creator of community.

I spent a few minutes the other day catching up with Craig. We talked about the weather in Los Angeles (hot, really hot!), and the heat that his community, The Pico Union Project, has generated.

Craig: My wife and I bought the Pico property about 10 years ago. It was the first home of Sinai Temple. It was where I celebrated becoming Bar Mitzvah, got married and created Friday Night Live with Rabbi David Wolpe. It happened to be the oldest synagogue structure in Los Angeles.

We thought that we could turn it into a cool place, into a destination venue. We would bring in great music, great food, and even great scotch. My daughter told me: “You should ask the people in that area what they need. You’re not just a musician; you’re a community builder. She put it all together for me. For the last 10 years, we’ve been bringing people together — people from all different backgrounds, all different classes, and it has been amazing. Our principle is: ‘Love your neighbor as yourself.’ 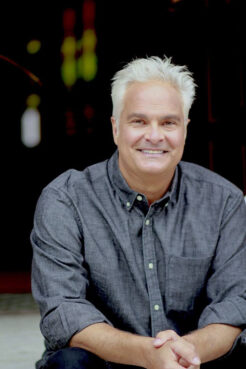 There are three faith communities that meet here: a Black church, a Latino church and a Jewish group. We have brought in amazing music, like Idan Rachel, Jackson Browne, Rhiannon Giddens and the Klezmatics. During the week, we do a lot of social service programs. We distribute 20,000 pounds of produce a week.

It also happens to be in the poorest neighborhood in Los Angeles. We are in a food desert. The closest grocery store is 2 miles away. People can’t get fresh produce, so they eat unhealthy foods. It reflected what happened during COVID; over 3,000 people in our district died of the disease. But, not in our immediate neighborhood — because of the food distribution program.

We do health screenings, COVID screenings — it has been an interesting journey. Fifteen hundred people a week cross our threshold.

Jeff: This is amazing stuff. It makes me wonder: Have other communities imitated your model?

Craig: In Helena, Montana, a group just bought the oldest synagogue in town back from the Catholic diocese. They call the initiative the Montana Project.

I told them: ‘The odds of you creating a strong Jewish community in Helena are pretty slim. But, if you want to create a Jewish presence here that mirrors Jewish values, that might work, and you will serve the community with those values.’

They liked that. It actually means you can have Jewish values without Jews!

Jeff: So, in a smaller community where there are few or no Jews, there can still be reverberations of Jewish values. Sort of like, Judaism without Jews. I really do need to think more about that.

Craig: So, I was talking with Ron Wolfson (the visionary Jewish educator and thought leader) the other day as we were driving to Orange County to honor Pastor Rick Warren on the occasion of his retirement from Saddleback Church.

Ron was telling me about an idea that is intriguing him — getting all the people in the world who have some Jewish DNA in them and getting them to become our allies.

So, that’s millions upon millions of people, whom we hope will see themselves within the Jewish narrative. But, what’s in it for them? Here’s an idea: Create a party for all these people who have some Jewish stuff in them, and to invite them, with no agenda, to tell their stories.

How many millions of dollars has the Jewish community spent in battling BDS? Why not take that money and invite Christian and Muslim college kids to join Jewish kids on trips to Israel? Together they could learn the good, the bad and the ugly and let them come to their own conclusions and tell their own stories.”

Jeff: So, you’re looking to expand the Jewish palette. Very interesting and a very compelling idea. That brings me to “Jewels of Elul,” your pre-High Holy Day daily set of readings. It seems to me that this is precisely what you are doing.

Craig: Exactly. If you’re going to publish inspirations for the 29 days of Elul, leading up to Rosh Hashanah, why limit it to one voice, when you can get 29 different voices?

In the first year, it was mostly rabbis and other Jewish leaders — basically, friends of mine. But then, in the second year, I invited Pastor Cecil “Chip” Murray. He’s 93 years old now and a remarkable man, who single-handedly stopped the Rodney King riots. I put him in there because it was about the art of loving your neighbor. Someone wrote to me, and said: ‘What can I possibly learn about the High Holy Days from a n—–?’

Jeff: My God. I simply cannot get my mind around that — that someone would actually say such a thing.

Craig: I said: ‘Wow.’ That anyone could think that this is a Jewish way to think about Jewish ritual shocked me! So, I opened ‘Jewels of Elul’ way up. Because the only way that I can choose to love my neighbor, or not to love my neighbor, is by knowing my neighbor. If I am only listening to the same voices — mostly rabbis who are my age — how can I expect me or anyone to grow?

So, yes, we broke it open, and we found many allies. Did I agree with all of them? No. I didn’t need to. We need more voices now — more than ever before. Stop telling people how you disagree with them; find places where you do agree.

Jeff: I have to tell you, I have loved ‘Jewels.’ I like seeing the people I admire in there, and you have done an amazing job of bringing in unknown or less known voices. You also have this thing about finding celebrities and getting them to talk about their lives. Who have been your favorite teachers that you have included over the years?

I love the diversity of people who have written for ‘Jewels.’ Lady Gaga and the Dalai Lama have written for us. But the stuff that spoke to me the most were the people who simply told stories out of the depths of their own beings and experiences — about the moments, memories and epiphanies that changed them.

Hey, Jeff, do you remember the jewel you wrote for us several years ago?

Jeff: No. You will have to remind me.

So here it is:

Sometimes, a Broadway show is not just a performance. It is a dream set to music.

That was my experience when I saw “The Band’s Visit,” the multi-Tony Award-winning musical version of the Israeli film of the same name. “The Band’s Visit” is the story of an Egyptian police band, booked to sing in the Israeli city of Petach Tikvah (“with a p”). Through a simple linguistic error, the band winds up in a small desert town — Beit Hatikva (“with a b”). There, a café owner, Dina, invites them to stay the night, as an unresolved romantic tension between her and the captain of the band grows.

“The Band’s Visit” portrays Israeli Jews and Egyptian Muslims as dwelling together for a single night. Forty-five years ago, Israel and Egypt fought a war against each other. No one seems to remember. Their individual cultures flow imperceptibly between them. The music is enchanting in its blurring of Arab and Middle Eastern Jewish modes.

“The Band’s Visit” is almost a messianic moment. Israeli Jews provide hachnasat orchim, hospitality, for Egyptian strangers — just as our common father Abraham did for sojourners in the same desert that now houses Beit Hatikva. People see themselves as merely people – with secrets, longings, and love.