VATICAN CITY (RNS) — Joining young people from more than 100 countries, Pope Francis signed a document on Saturday (Sept. 24) that lays out ideas for a new economy inspired by St. Francis of Assisi, the pope’s namesake known for his dedication to the poor, the environment and peace.

More than 1,000 young activists, economists and entrepreneurs under the age of 35 gathered in Assisi, St. Francis’ birthplace, over the weekend for a meeting on “the Economy of Francesco,” held to present an economic vision that pushes back against systems currently in effect that the activists said favor the rich.

The gathering was the culmination of two years of online and in-person gatherings and events inspired by the pope’s call to action two years ago to mitigate the worst effects of capitalism.

The 85-year-old pontiff arrived aboard a helicopter to the main square early on Saturday to hear testimonies from some of the participants and deliver a speech juxtaposing the promise of young people with the devastation wrought by climate change, war and financial inequality.

“Today, a new economy inspired by Francis of Assisi can and must become an economy of friendship with the earth and an economy of peace,” the pope said. “It is a question of transforming an economy that kills into an economy of life, in all its aspects.”

Francis then signed “The Economy of Francesco Pact,” written by the young members of a group of the same name, which pledges its signers to pursue peace, care for the environment and place the poor and most vulnerable at the center.

“Usually, in mainstream economy, poverty is considered at the margins,” said Archbishop Domenico Sorrentino of Assisi, a member of the committee of the Economy of Francesco, in an interview with Religion News Service. Supply side economic views, which theorize that wealth trickles down from the wealthiest to the poorest in society, tends to place poor people at the bottom of the pyramid, the archbishop said.

“Today this view is in a crisis thanks to critics of mainstream economy,” he added, pointing to the work of English economist Kate Raworth, a proponent of the “doughnut economy,” which prioritizes sustainable development. Raworth presented her views to Economy of Francesco advocates in a 2020 session called “We are all developing countries now,” drawing praise from the pope. 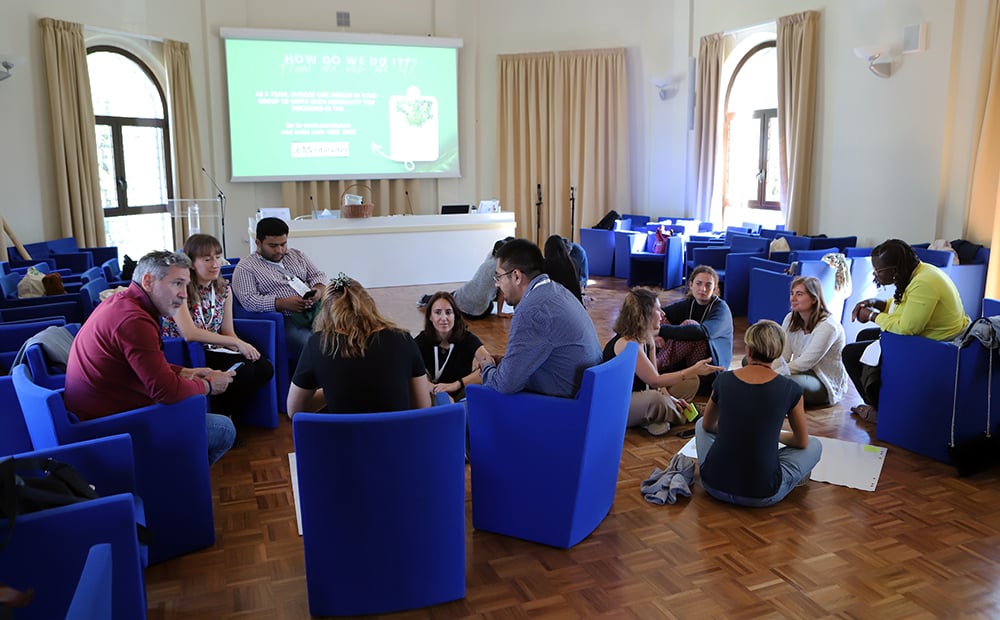 “We support this radical criticism,” Sorrentino said, adding that the wide disparity “between the tiny percentage of rich people who have most of humanity’s wealth in their hands and the great multitude of poor who greatly struggle” is proof that “mainstream economy has failed.”

Shifting the focus to the poor was a main point of Francis’ speech on Saturday and of the proposals of the young economists of Francesco. Taking his cue from the life of St. Francis, who rid himself of all possessions including his clothes, and of the Franciscan friars who followed in his footsteps, the pope sketched his economic outlook.

“The first market economy was born in the 13th century in Europe through daily contact with Franciscan Friars, who were friends of the first merchants. That economy certainly created wealth but it did not despise poverty,” said Francis. “Our capitalism, instead, wants to help the poor but does not respect them.”

“We do not have to love poverty,” he added. “On the contrary, we need to combat it, above all, by creating work, dignified work.”

The pope underlined the “spiritual unsustainability to our capitalism,” which he said has eliminated meaning or “spiritual capital” and replaced it with the pursuit of material goods. Many young people suffer from a lack of meaning in their lives, the pope said, and “often find their souls depleted of the spiritual resources needed to process suffering, frustration, disappointment and grief.”

Rebuilding this “spiritual patrimony” must start with focusing on the weakest in society “from conception in the womb to the sick person with disabilities, to the elderly person in difficulty,” Francis said.

“It is not enough to make cosmetic changes,” he said, adding that “we cannot just wait until the next international summit: The earth burns today, and today we must change, at all levels.” Francis backed young people calling for “an ecological transition” by taking responsibility for what has been done and making sacrifices. Once again, the pope called for the abandonment of fossil fuels, reducing emissions and developing zero- or positive-impact sources of energy.

“Quick and decisive change is needed,” Francis told young adults in Assisi. “I am counting on you! Do not be afraid to bother us! Be an example for us!”

Other speakers at the meeting included Ralyn “Lilly” Satidtanasarn, a 14-year-old who has been campaigning against single-use plastic in Thailand for the past seven years, and Samuel Lekato, who reformed the farming and educational systems in his community in Kenya.

Young activists for women’s rights in Afghanistan, and others from Argentina and Poland, described to the pope how they embraced his appeal to change their lives and society around them.

The archbishop said that the Economy of Francesco has also created an “Economy of Fraternity” prize for projects that transform communities in the spirit of Saint Francis. This year, the 50,000 euro prize went to a community in Manila, Philippines, that collaborated with disabled people to transform lotus flowers into compostable bricks.

“Some, looking down at us, might say that this juvenile enthusiasm will eventually collide with the powerful structures of the world,” Sorrentino said. “But in history, great things started small.”

RELATED: Why China feels threatened by the moral authority of a 90-year-old Catholic bishop