(RNS) — One of the more frustrating aspects of our democracy is that progress is not always accomplished in a straight line. We make progress and then the pendulum swings, and progress is lost and must be reclaimed.

That’s the position in which communities of color, poor people and young people all find themselves in 2022 as we head toward November’s midterm elections.

Thanks to the civil rights movement, many of us felt we had slain the Goliath of voting rights denials when Congress passed the Voting Rights Act of 1965. Sadly, in one of its worst voting rights decisions, the U.S. Supreme Court, in its decision in Shelby County vs. Holder in 2013, removed much of the enforcement power of the act.

Seven years later, after record voter turnout in the 2020 presidential election, legislatures in 49 states considered a torrential backlash of 440 anti-voting laws, with 33 of the measures becoming law in 19 states. One such law criminalizes people for giving food and water to weary voters. Some state laws have given legislatures the power to overturn the will of the people after the votes have been counted.

Fellow Americans, our democratic house is on fire. We are in a state of emergency and cannot afford to sit on this. The late John Lewis said it best: “A vote is the most powerful non-violent tool we have — almost sacred.” Our democracy is imperiled, and everything is at stake with our democracy under unprecedented attack.

Faiths United to Save Democracy is a diverse group of non-partisan leaders of several faiths, races and generations representing churches, synagogues, temples, mosques, chapels and meeting houses from across the country. We are concerned about the protection of American democracy and our vote.  We are concerned about the disinformation, flat-out lies and voter intimidation that threaten to compromise the integrity of our elections.

Highly organized partisan groups are targeting voters of color and other vulnerable citizens — the elderly, the poor of every race, the disabled and people with language barriers — in an escalating attempt to dissuade them from going to the polls. The failure of the Senate to pass the John Lewis Voting Rights Advancement Act and the Freedom to Vote Act leaves voters more vulnerable than ever. 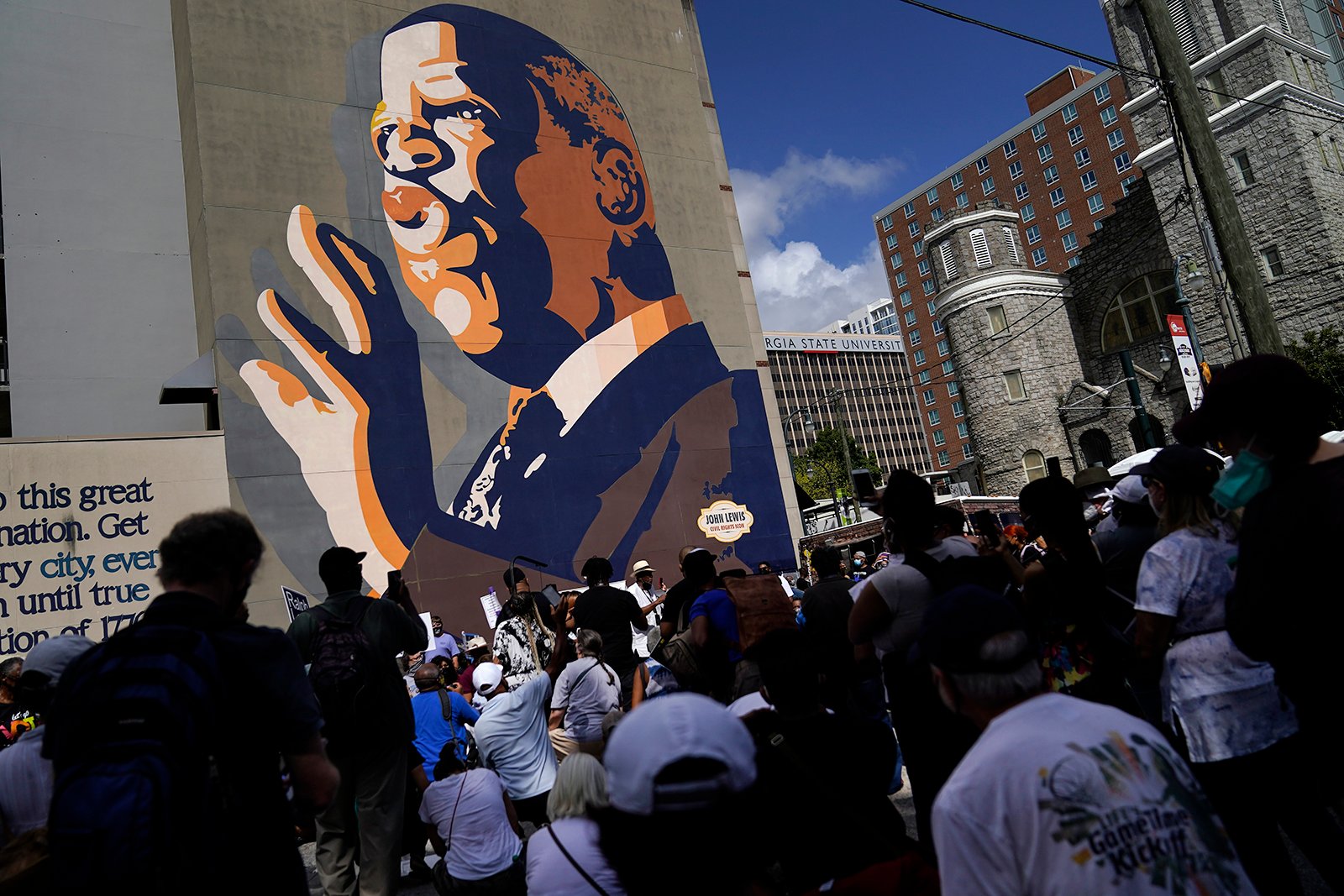 Demonstrators stop at the John Lewis Mural during a march for voting rights, marking the 58th anniversary of the March on Washington, Aug. 28, 2021, in Atlanta. Voting rights advocates have rallied across the country to call for sweeping protections against a further erosion of the Voting Rights Act of 1965. (AP Photo/Brynn Anderson)

For us, voting is rooted in the certainty that everyone is created in the image of God and deserves to vote for their convictions and values in free, fair and safe elections. Faiths United to Save Democracy is sending a clarion call to America that we cannot afford to sit on our hands and watch this God-given privilege die at the mercy of fear and frustration.

But it is not the work of one organization. We must all prepare voters to understand the purpose and power of their vote. We must continue to demand that state election officials and elected leaders garner and disseminate proper information about voting protocols, protections and new election laws.

America’s houses of worship, taken together, make up the largest civil institution in America. Together, we have an opportunity to protect our democracy. We are watching what’s happening in state legislatures and polling centers, and we are working together to ensure that voters will feel safe, that the will of the people’s voices is heard and not hindered and that they feel confident to cast their votes and be counted without intimidation, disinformation or obstruction.

We are recruiting, training and mobilizing 2,000 poll chaplains in 10 priority states to serve as visions of peace and a moral presence at the polls to allow voters to see that people of faith, including pastors, rabbis, imams and lay persons, from millennials to traditionalists, are there to watch, pray and protect their sacred right to vote.

Democracy belongs to the people and must be protected.

(The Rev. Barbara Williams-Skinner, CEO and co-founder of the Skinner Leadership Institute, and the Rev. Jim Wallis, founding director of the Georgetown University Center on Faith and Justice, are co-coordinators of Faiths United to Save Democracy. The Rev. Adam Taylor is the president of Sojourners. The views expressed in this commentary do not necessarily reflect those of Religion News Service.)