(RNS) — After decades of issuing explicit instructions to youth about what to wear (and, far more often, what not to), The Church of Jesus Christ of Latter-day Saints is taking a more hands-off approach. The new edition of “For the Strength of Youth,” released on Saturday (Oct. 1) at the denomination’s semiannual General Conference, sounds markedly different from previous rules about dress and personal grooming.

In the section “Your Body Is Sacred,” FTSOY tells teens their bodies are “an amazing gift” from God, and as such they deserve to be clothed with respect:

As you make decisions about your clothing, hairstyle, and appearance, ask yourself, “Am I honoring my body as a sacred gift from God?” Heavenly Father wants us to see each other for who we really are: not just physical bodies but His beloved children with a divine destiny. Avoid styles that emphasize or draw inappropriate attention to your physical body instead of who you are as a child of God with an eternal future. Let moral cleanliness and love for God guide your choices. Seek counsel from your parents.

And … that’s it. No checklist.

This is the kind of approach Joseph Smith advocated long, long ago: “I teach them correct principles and they govern themselves.” The new FTSOY assumes young people have moral agency and are learning how to use it well.

“I suppose the guide could give you long lists of clothes you shouldn’t wear, words you shouldn’t say, and movies you shouldn’t watch,” Elder Dieter Uchtdorf stated when introducing the new pamphlet. “But would that really be helpful in a global church? Would such an approach truly prepare you for a lifetime of Christlike living?”

So, first: Hallelujah! It sounds as though the church is setting aside the intense focus on appearance it has promoted for decades now. As a researcher, I think this change makes sense given how many Latter-day Saints say they left the faith because they felt “judged or misunderstood” by members. As a church member, I think it’s high time we stop weaponizing dress standards as one way to judge and misunderstand.

And second: The way he framed it was interesting. His questions seemed to admit that no, the church’s approach hasn’t been helpful, both because it imposed American standards of dress and grooming on the rest of the world and because the church’s longtime focus on external appearance hasn’t been effective in helping young people actually follow Jesus. 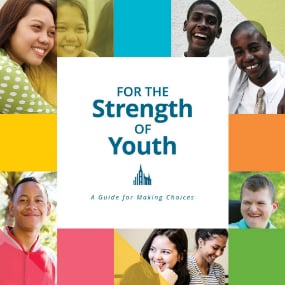 The church has revamped its “For the Strength of Youth” pamphlet and says it is “based on gospel principles, agency and inspiration.” ©2022 by Intellectual Reserve, Inc. All rights reserved.

Just for the sake of comparison, let’s revisit some of the specific rules in previous iterations of FTSOY. In the initial pamphlet from 1965, dress and grooming were apparently considered so important they were addressed first thing. “How important it is at all times to know how to dress, to act, and to live,” it said. Note that how to dress came before how to live. In fact, guidance on what not to wear took up nearly half of the 16-page pamphlet.

Most of the counsel was directed toward girls, appealing to their vanity to convince them to adopt modest standards. “Few girls or women ever look well in strapless or backless dresses,” the pamphlet warned. “Such styles often make the figure look ungainly and large, or they show the bony structures of the body.” Bony structures. Saints preserve us!

Slacks were also verboten except in certain athletic circumstances, like when hiking or playing sports. Pants were definitely not OK for school, in public restaurants or — my favorite — “in the library.” (I am writing this from a library, where I am in fact wearing pants.)

Girls were told to “always try to look feminine” in their style of dress. “They should not dress like boys or give a masculine appearance” since “dress often … determines actions.” In other words, if girls start wearing pants, they’ll want to actually have some say in how to run their own lives, and we can’t have that.

By the 2001 edition of FTSOY, we see a much stronger focus on God and spirituality, but still a long and explicit list of what not to wear.

Even more than the exactitude of the restrictions, especially for girls, the pamphlet seemed to bend over backward to connect how young people looked on the outside with their approved standing in the eyes of God.

“When you are well groomed and modestly dressed, you invite the companionship of the Spirit and can exercise a good influence on those around you,” it read.

And this: “Always be neat and clean and avoid being sloppy or inappropriately casual in dress, grooming, and manners. Ask yourself, ‘Would I feel comfortable with my appearance if I were in the Lord’s presence?’”

These guidelines drew a clear line between dress and “the companionship of the Spirit,” as if not wearing conservative American clothing could cast you out of God’s very presence. I mean, heaven forbid you should someday approach the pearly gates clad in yoga pants.

As Elder Uchtdorf’s talk suggested, one of the problems with one-size-fits-all lists like this is that the LDS church is supposed to be a global religion. Imagine that you are a Maori boy whose tattoos symbolize ancestral history and belonging, and you’re confronting a church culture that teaches, as President Gordon Hinckley did without exception in 2000, that all tattoos are “graffiti on the temple of the body.” Or think of the confusion you might feel if you were a young LDS woman in India, where a bare midriff isn’t considered immodest but the knee-baring shorts favored in Provo might constitute a startling breach.

In other words, the expectation of the earlier iteration of FTSOY was that American standards of modesty were ascendant and everyone else had better fall in line if they wanted to be right with the Lord. It’s good to see the church recognizing that American cultural standards are not a universal, timeless gospel.

It will be interesting to see how, and even whether, the new FTSOY approach is adopted. I quoted Joseph Smith earlier, saying he gave people good principles and expected them to govern themselves. But he and other early Mormons could also be micromanagerial, just as many of us are today; there is always a countervailing tendency for people to want to know absolutely and without question what the limits are.

So I expect we will see pushback from within the church, even from other general authorities and officers. Some will fret aloud about These Kids Today with their nose piercings, and continue to connect the presence of said piercings to their wearer’s personal unrighteousness. Change is slow. Generations of Latter-day Saints have grown up internalizing the notion that their clothing was powerful enough to invite or repel the very Spirit of God, and that kind of rigidity doesn’t disappear without a fight.

Still, the new pamphlet’s approach is an excellent step in the right direction.