(RNS) — “Of all the dispositions and habits which lead to political prosperity, religion and morality are indispensable supports,” declared George Washington in his 1796 Farewell Address (in a sentence drafted by Alexander Hamilton).

But had he been around for the Herschel Walker affair, the outgoing president might have amended the text.

Not that Washington would have been shocked at the disconnect between a politician’s moral claims and his personal behavior. Indeed, the following year Hamilton himself publicly ’fessed up to an adulterous affair.

As for Walker, he seems to be surviving on the strength of those most fervent upholders of religion and morality, the white evangelicals of Georgia, who are unwilling even to suggest they might have a problem voting for a man who is accused of persuading his girlfriend to get an abortion (and paying for it).

Did I mention that Walker is campaigning on an anti-abortion platform that does not allow exceptions for rape, incest or the health of the mother?

I know, I know, this allegedly supposedly happened a dozen years ago, and evangelicals believe deeply that past sins can be forgiven. As devoted Walker supporter Ralph Reed told NPR, “(T)he message of the gospel is that we can all find redemption through faith in Christ. Herschel’s story is one of redemption and hope.”

Only problem is, for forgiveness to happen you’ve got to, well, ’fess up (as Hamilton did). While Walker has acknowledged a number of past sins, he has yet to own up here, instead threatening to sue the Daily Beast, which broke the story.

If, in the face of substantial documentary evidence and his own son’s j’accuse to the contrary, you nevertheless believe Walker when he says he didn’t do it, doesn’t know the woman (who happens to be the mother of one of his other sons out of wedlock) and professes that it wouldn’t have been so bad if he did do it — well, I’ve got a mountain of granite with depictions of Jefferson Davis, Stonewall Jackson and Robert E. Lee on horseback in DeKalb County, Georgia, I’d be happy to sell you.

What Walker’s case makes clear is that evangelical disapproval of immorality in politicians no longer has any bearing on their vote. Back in the last millennium, they roundly condemned Bill Clinton for his dalliance with Monica Lewinsky. As recently as 2011, 60% of them said they believed that a public official who “commits an immoral act in their personal life” cannot still “behave ethically and fulfill their duties in their public and professional life.”

That number dropped to 20% after the emergence of the notorious “Access Hollywood” footage in which Donald Trump … well, you know.

If memory serves, it was back during the 2008 election cycle that some evangelical leaders began justifying a vote for a presidential candidate who wasn’t “one of us” by intoning, “We’re electing a president, not a pastor.” Then it was Mitt Romney, the Mormon, for whom a conscientious vote had to be justified.

The line was trotted out repeatedly for Trump in 2016, problematic morals having been substituted for a problematic religious identity. But no one even seems to be bothering in the case of Herschel Walker.

Once upon a time, white Southerners were called Yellow Dog Democrats because it was believed they’d vote for a yellow dog so long as it had a “D” next to its name. These days, white evangelicals might be called Moral Leper Republicans.

Four centuries ago, the pioneering American Baptist Roger Williams, anxious to ensure that religion did not get mixed up with secular concerns, claimed that in the Bible, when Jews or Christians “opened a gap in the hedge or wall of separation between the Garden of the church and the wilderness of the world, God broke down the wall itself, removed the candlestick, and made his garden a wilderness, as at this day.”

In 1980, white evangelical leaders opened a gap in the hedge when they made a bargain with the GOP to seize political power. And their garden has become a wilderness. 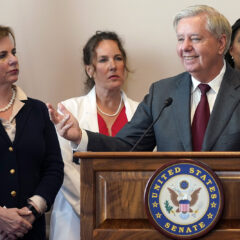