(RNS) — Negiel Bigpond remembers being made to stand overnight on a one-foot-square box, his nose pressed to the wall, until morning came and the school day started. A punishment for speaking his Yuchi language.

He didn’t like it, but he thought at the time, as a child in the 1960s, that was just the way things were.

Only now, in his 70s, looking back at the years he spent at Chilocco Indian School near Newkirk, Oklahoma, does he realize how cruel that was.

“Now when I look at it and talk about it, sometimes I weep about it, because I look back at the past and look what I did and look at the way I was treated, and I can’t figure the two out,” Bigpond told Religion News Service last year.

“So now it kind of bothers me more than it did then.” 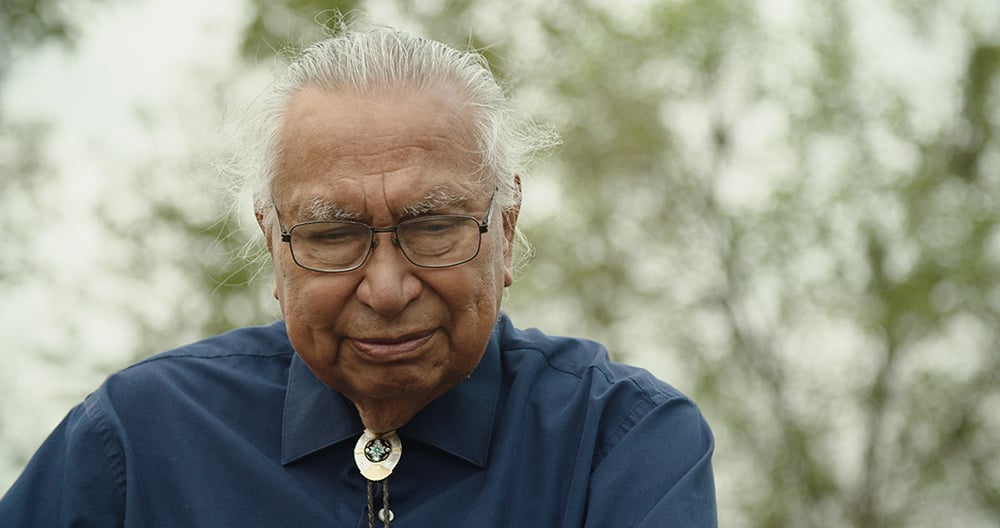 New evidence last year of human remains buried near Canadian residential schools for Indigenous children led the U.S. Department of the Interior to create its own Federal Indian Boarding School Initiative. The gruesome discoveries also pushed a number of Catholic and Protestant Christian institutions to reckon with the roles they played in the often religious boarding schools that separated generations of Native American children from their families and cultures.

Now, as both political and church leaders urge truth-telling and healing, the question remains: What does healing mean to the still living survivors and descendants of those who experienced abuse in the U.S. Indian boarding school system?

There’s no one path to healing, according to James William LaBelle Sr., interim president of the National Native American Boarding School Healing Coalition. But one thing LaBelle, Bigpond and other Indigenous leaders agree on: The first step is an apology.

“A big aspect of the healing is going to be a sincere, heartfelt apology by the different denominations that participated in the boarding school process,” said LaBelle, who is Inupiaq.

But survivors need more than an apology for true healing; there needs to be some restorative actions taken by the government and the denominations that participated in the schools, according to LaBelle. “You have to understand that many churches actually received federal monies for this process,” he said.

“Healing for some will mean getting our lands back. Other people might say healing means, you know, helping us reclaim our language and our culture, because those were taken away from us during the boarding school era,” he said.

LaBelle also pointed to the need for access to healing centers, counseling and other places where people can go through a healing process.

For LaBelle, who attended two boarding schools between 1955 and 1965 in Alaska — the Wrangell Institute in Wrangell and Mount Edgecumbe High School in Sitka — going to counseling and talking about his experiences have helped him heal, as has the support of his family.

He remembers students being forced to run naked down a line of classmates, who hit them with their belts, as a form of punishment, often for speaking Native languages. That’s why, he said, he stopped speaking his.

“But, you know, we got beat anyway for other reasons,” he said.

Both schools LaBelle attended were run by the U.S. Bureau of Indian Affairs, he said, but he remembers churches working with the schools to continue what he called “the assimilation process, including becoming Christians.”

The United States operated 408 boarding schools for Indigenous children across 37 states or then-territories between 1819 and 1969 — half of them likely supported by religious institutions, according to the Federal Indian Boarding School Initiative report. A makeshift memorial for the dozens of Indigenous children who died more than a century ago while attending a boarding school that was once located nearby is displayed under a tree at a public park in Albuquerque, New Mexico, on July 1, 2021. (AP Photo/Susan Montoya Bryan, File)

LaBelle and his brother were assigned to the Southern Baptist Convention. He does not share that faith now, he said.

“That’s what I think the churches need to hear: They actually need to understand that during the course of trying to colonize, acculturate, assimilate, they did it in such a way that it created spiritual harm, emotional harm, psychological harm, loss of language, loss of land,” he said.

And healing won’t come overnight — or even in the next year or two, he said. It’s taken hundreds of years of shared history to reach this point.

Survivors aren’t the only ones who need to heal, according to LaBelle.

Hearing the stories of what survivors experienced at boarding schools might help them to understand and to heal, LaBelle said. It’s why he keeps sharing his story, he said. He hopes it will give others the courage to share theirs.

RELATED: In 2010, the US apologized to Native Americans. A new spiritual movement aims to recognize it.

Talking about it has helped Bigpond heal, too. It’s also made him realize he’s not as healed as he thought he was.

A fourth-generation minister — his father, grandfather and great-grandfather all were Methodist ministers, and he founded and pastors Morning Star Church of All Nations in Mounds, Oklahoma — Bigpond said he knows it doesn’t help him to hold on to anger and bitterness. 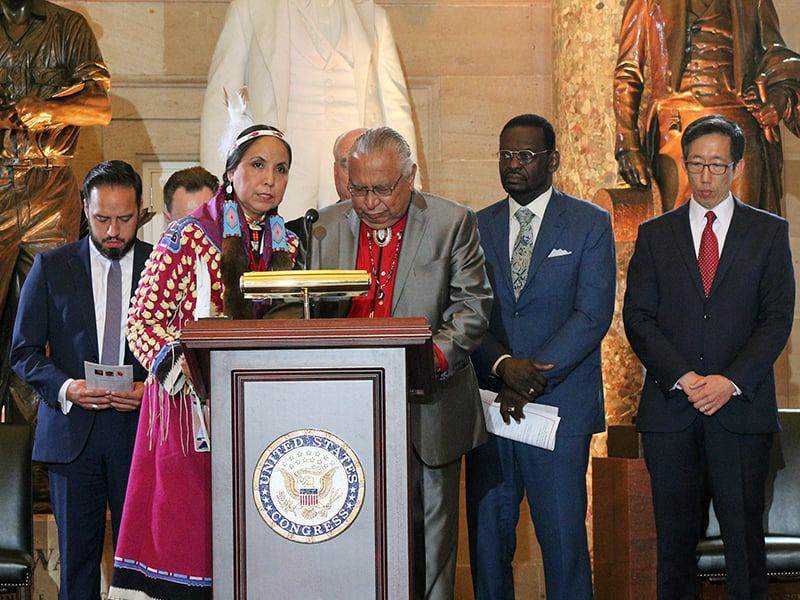 Verly Fairbanks, left at podium, and Negiel Bigpond offer prayers for “unity among all ethnicities” at a National Day of Prayer event in the Capitol’s Statuary Hall on May 3, 2018, in Washington. RNS photo by Adelle M. Banks

But new stories about the schools in the U.S. and Canada, while necessary, have brought back old memories, old pain, old hurts.

Bigpond thinks an apology from the United States government could go a long way toward helping him heal.

He and Sam Brownback, the former Kansas governor, senator and U.S. ambassador, launched a movement in July 2021 to raise awareness of the little-known apology the country already has made to Native Americans, which was buried in a defense spending bill and signed into law in 2010. They hope President Joe Biden will formally recognize it in a ceremony at the White House Rose Garden.

“An apology would be good medicine to heal people and heal the land,” Bigpond told RNS at the time.

Ruth M. Johnson, who is Navajo, said churches need to apologize, too. Johnson, 73, thought she might turn her story into a book one day. Her daughter suggested that sharing what happened to her in boarding schools might help her heal.

But she’s never been able to finish it. She can’t get past the abuse she endured, she said.

She was very young — about 5 years old — when she first attended St. Christopher’s Mission in Bluff, Utah. While there, she said, she became sick with impetigo, a contagious skin infection. She was traumatized when adults at the school shaved her head and she lost the long hair that represents rain in Navajo culture.

Her grandmother was so upset after that, she wouldn’t let Johnson go back to the school. “But,” Johnson said, “the missionaries came for me anyway and still took me back.”

Later, Johnson remembers being picked up by the Navajo police and driven to the Navajo boarding school in Shiprock, New Mexico, along with about 10 other children from Utah. The vehicle didn’t have windows or air conditioning, and the road wasn’t paved, she said. It took nearly a day to reach the school.

That’s where, she said, she was physically abused.

Johnson still attends church at St. Christopher’s and is a member of the Episcopal Church’s House of Deputies representing the Navajoland Area Mission. The Episcopal Church is the only church she has ever known, she said. She balances that with her traditional Navajo songs and prayers.

“I’ve never wavered from my faith.”

“I could have easily been one of those that didn’t make it home,” she said at General Convention. 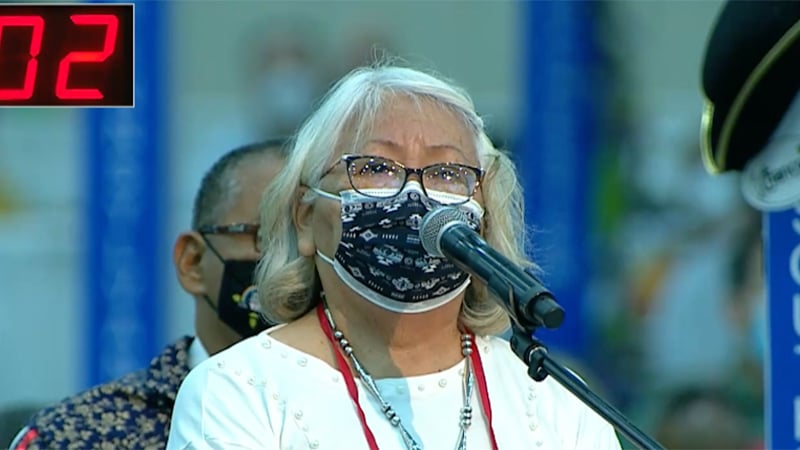 Navajoland Area Mission Deputy Ruth Johnson speaks to the House of Deputies during the General Convention of the Episcopal Church in July 2022. Video screen grab

The resolution is a start, she told RNS, and she feels confident the Episcopal Church recognizes its wrongs and is moving toward making amends.

All the denominations responsible for separating Native children from their families “need to atone for their sins,” Johnson said.

“Even though all these ugly things happened to me, I’m still here. They didn’t break me or they didn’t kill me. So I see that as a positive thing.” 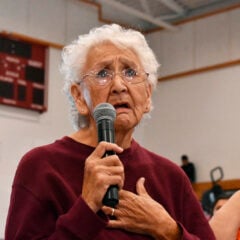