(RNS) — A diverse group stands in front of an imposing church: A young person wearing a T-shirt reading “Pride” in rainbow lettering. A female priest wearing a red stole — the liturgical color of Pentecost, the feast celebrating the Holy Spirit’s role in revelation, according to Christian belief.

“We are the young people of the future and the future is now!” reads a banner streaming up from the group.

This imaginary scene depicts the dreams of many Catholics: a church that welcomes LGBTQ people, allows women to be ordained and gives young Catholics a platform for their ideas.

The scene appears in a series of digital art pieces created by Catholics in the Archdiocese of Philadelphia as part of the Vatican’s Synod on Synodality, a churchwide exercise started by Pope Francis and meant to increase the Catholic hierarchy’s engagement with the laity — especially with young and marginalized people around the world.

RELATED: Synod on Synodality: Where has it been and where is it going?

The digital artwork came out of an effort called Synodality in Catholic Higher Education in the Archdiocese of Philadelphia, which conducted 48 listening sessions last spring and summer at 14 colleges and other Catholic campus organizations in the Philadelphia area, including Villanova, La Salle and St. Joseph’s universities. Young adults and students add to an interactive art installation during a Synod on Synodality listening session at La Salle University in Philadelphia on April 4, 2022. Photo courtesy of the Archdiocese of of Philadelphia

The sessions involved nearly 400 students and were guided by a 40-person leadership team whose aim, according to the SCHEAP 2022 Summary Report, was to “elicit students’ joys and obstacles of journeying with the church, as well as their hopes for its future.”

Art played a central role in this work. Becky “Bex” McIntyre, a St. Joseph’s alumna and muralist raised in Philadelphia (“the mural capital of the world,” according to some), acted as a “synod animator” for the student listening sessions. Her “visual notes” helped those who attended clarify and catalog their ideas.

“Visual notetaking is a new dimension of listening, where people are listening and discerning with each other,” McIntyre told Religion News Service. “Words are one thing, but for people to see what they are sharing in images is important in visualizing the church we are talking about.”

During a cross-campus listening session with more than 50 students from all 14 institutions, attended by Philadelphia Archbishop Nelson Perez, McIntyre helped students assemble an interactive art installation about their journeys with the Catholic faith. 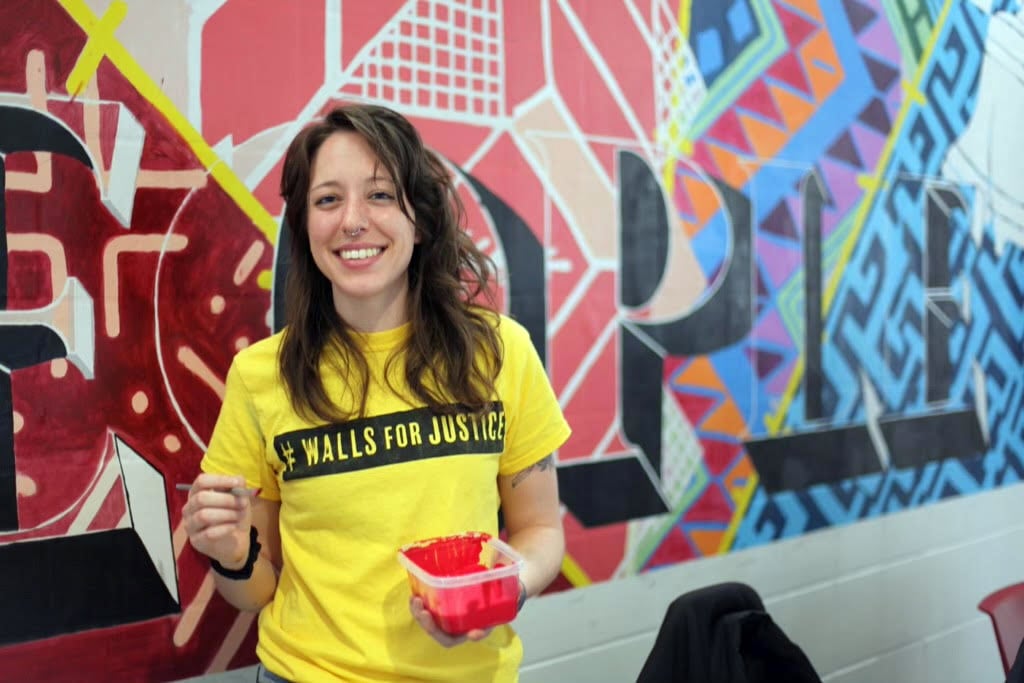 McIntyre’s artwork represents many of the students’ dreams, sorrows, worries and hopes for the church: women’s ordination, the inclusion of LGBTQ people, the engagement of religious and ideological diversity, the pursuit of racial justice and a collective response to ecological crises.

“All of the words and all of the images in the report came directly from students,” McIntyre said. “A lot of students shared how they were feeling this tug of war.”

SCHEAP’s emphasis on art, as well as the scale and comprehensiveness of its listening sessions, was recognized in the synthesis report that the U.S. Conference of Catholic Bishops sent to the Vatican, summing up the findings in all the U.S. dioceses.

Maureen O’Connell, professor of Christian ethics at La Salle University, said the SCHEAP coalition addressed “the question of ‘how do we invite students into their roles as protagonists in this church?’” O’Connell, the author of a 2012 book, “If These Walls Could Talk: Community Muralism and the Beauty of Justice,” said artistic responses to a question generate a “productive ambiguity” that assists in discernment.

“The arts preclude us from making God too small and comfortable and familiar, which denies in some ways the mystery and magnitude of God, and at the same time, art gives us an emotional, embodied, sensorial connection and experience of the Divine,” O’Connell said. 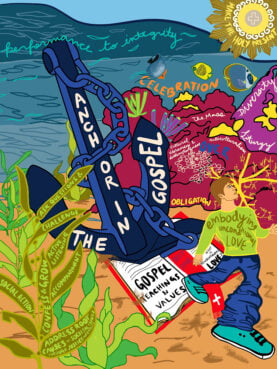 But when the Vatican Synod posted some of the artwork that came out of the SCHEAP sessions, traditionalists on Twitter critics pounced. “Delete this and repent,” said one commentator, who accused the creators of “giving a wink and a nod to sodomy.” Others posted traditional paintings of biblical scenes as examples of true Catholic art.

McIntyre defended the panels, saying they could not be properly understood outside of the written report. “This was in the context of students’ words,” she said, “and what I was hoping for and praying for was that the people who were against this would listen, would lean into the process of the synod and just listen to each other. That is what this is calling for.“

Synods have come to be associated with a meeting of bishops, but they have a longer history as a time for Christian leaders to listen to the faithful. In Francis’ vision, the Synod on Synodality will listen especially to communities that aren’t often given a voice in the church. Critics and proponents alike have called the synod “Vatican III,” casting it as a vehicle for revolutionary change by comparing it to the Second Vatican Council of the mid-1960s, or Vatican II.

The Rev. Stephen DeLacy, vicar of faith formation with youth and young adults for the Archdiocese of Philadelphia, said the synod can teach American Catholics the value of collaboration and dialogue in the country’s polarized culture.

“The divisiveness of our culture is not of God,” said DeLacy. “I believe that those in the church can be a powerful catalyst to shift the culture from an intensely competitive, divisive, polarized culture to one leading towards authentic dialogue and communion,” DeLacy said.

While it aims to discover the issues on the hearts of global Catholics, the synod’s supporters point out, the synod itself is hardly a reversal of the church’s top-down structure, as it was ordered by the pope. Listening to the wishes of the laity is a goal in itself; any changes that come of it will be decided, too, by the hierarchy.

“We are a church that believes in divine revelation, and by having the global synod, we are actually responding to the hierarchical instructions of the church that we believe lives out the revealed truth of Christ,” DeLacy said. 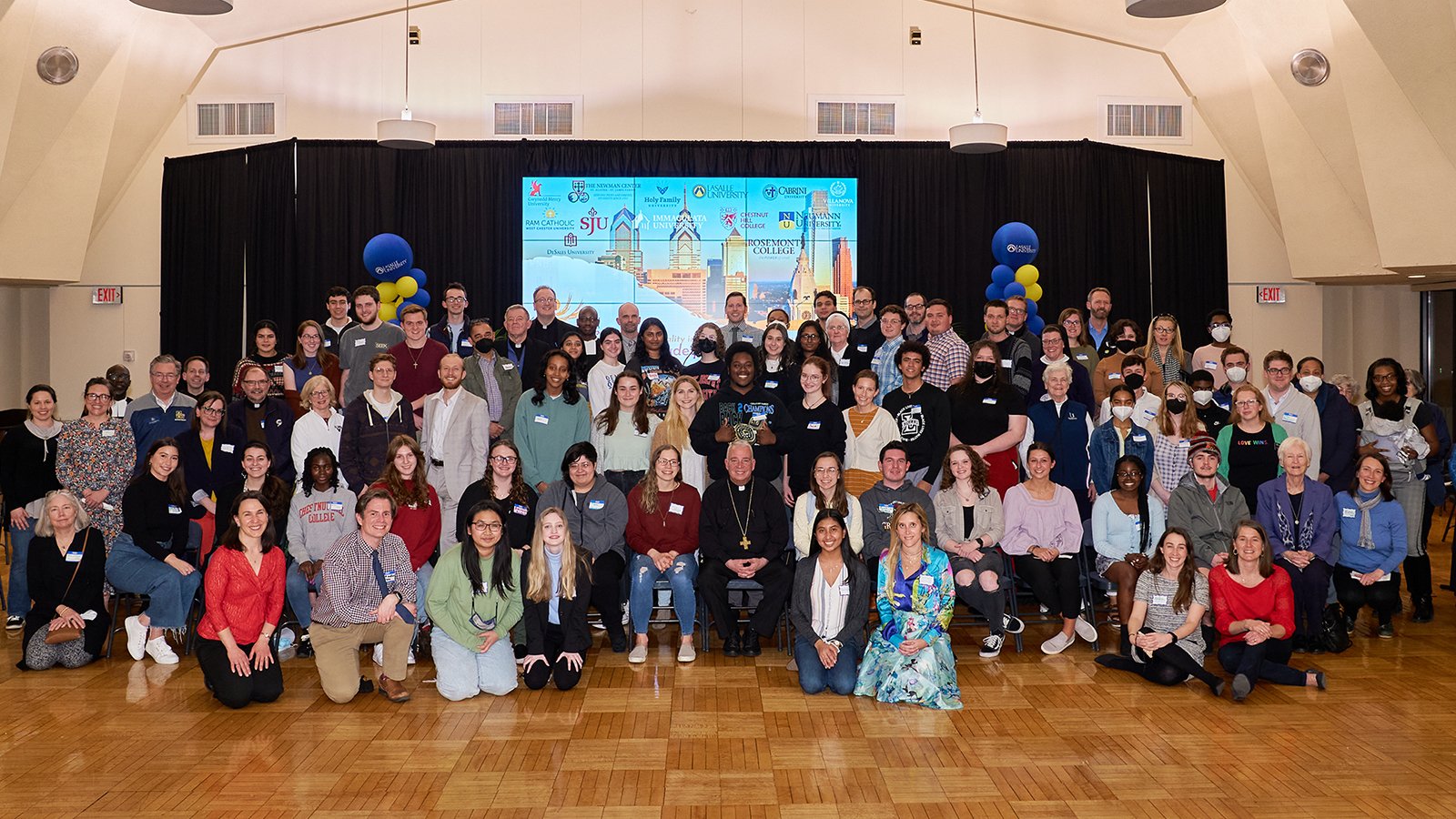 The findings of the Philadelphia Archdiocese’s listening sessions mirror much of what was compiled in syntheses from other diocese in the U.S. and elsewhere. The question of women’s roles in the Catholic Church, long regarded as a concern mostly in the West, appeared in the national conference of bishops’ reports from every continent, along with loss of trust in church leaders due to clergy sexual abuse. Even in places where homosexuality is still criminalized, the syntheses from local bishops showed support for LGBTQ Catholics.

As the synod moves to the “continental” phase, in which representatives on six continents will assemble to study the results from around the world, Cardinal Mario Grech, general secretary of the Vatican’s synod office, said that though the issues raised are contentious, he professed faith in the power of the Holy Spirit working in the global church. “There are some resistances, but it’s OK. Come forward! Let us walk together,” Grech said.

In Philadelphia, O’Connell said that the reaction to the archdiocese’s artwork was evidence of the synod’s necessity. “The invitation is to figure out: How do we hold on to our dreams, but not so tightly that they deny the hopes and dreams of others, and that is the critical next step in the synod,” O’Connell said.