SÃO PAULO, Brazil (RNS) — In the weeks before the World Cup tournament got underway in Qatar, Claudio Tapia, who heads Argentina’s national soccer federation, visited the sanctuary of Difunta Correa, in Vallecito, a district in Argentina’s western San Juan province.

He was there for two reasons. First, he had to thank la Difunta Correa, a folk saint in Argentina and parts of Chile, for Argentina’s success in the 2022 Finalissima, when South America’s champion defeated the European champion, Italy.

He also planned to ask la Difunta for Argentina’s victory in the World Cup.

“The important thing is not what is promised, but what is fulfilled. Finalissima 2022. Now, more than ever, go Argentina,” he said on social media, when he posted pictures of his visit to the shrine.

RELATED: Rainbow struggle playing out on sidelines of World Cup 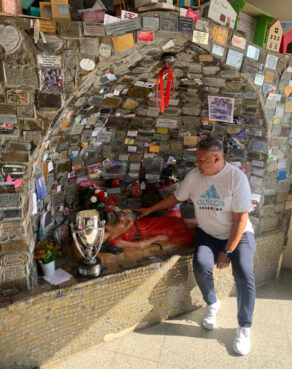 Claudio Tapia, President of the Argentine Football Association, visits a Difunta Correa shrine with the 2022 Finalissima trophy in early Nov. 2022, in western Argentina. Photo via Twitter/@tapiachiqui

Like Tapia, many Argentines have been rooting vocally for their national team, but taking care to pray to the country’s many folk saints.

Argentine soccer fans attending the matches in Qatar have brought Argentine flags to their stadium seats customized with the names of Difunta Correa or Gauchito Gil, another famous folk saint from the northern part of Argentina.

On Nov. 25, 24 hours before a crucial contest between Argentina and Mexico, the country’s rock music giant Andrés Calamaro posted on social media that the country’s squad needed protection from Gauchito Gil. Calamaro added Osvaldo Pugliese, a 20th-century tango musician who has become a sort of talisman for Argentine artists.

Traditionally a Roman Catholic nation, Argentina has been seeing a decline in the share of its population that is Catholic over the past decades. A recent study showed that Catholics went from being 76.5% of the population in 2008 to 62.9% in 2019. Evangelical Christianity and secularism have been steadily growing.

But the ancient devotion to folk saints never seems to flag, and indeed may be increasing. According to anthropologist Alejandra Belinky, a doctoral candidate at Rosario National University, devotion to Gauchito Gil has been greatly expanded in the past two decades.

“Such creeds are not only modeled according to the Catholic tradition of sainthood,” Belinky explained. “They are part of a history of popularly canonized marginal figures, heroes who were unfairly persecuted by the military or the police and so manifest a sense of transgression,” she said. Gauchito Gil is said to have been born in 1840 near the city of Mercedes, in Corrientes, as Antonio Gil — “Gauchito” is the diminutive of gaucho, as cowboy-like figures from southern Brazil, Uruguay, northern Argentina and Paraguay are known. They were usually rebellious horsemen who often served as seasonal workers but joined the army when called upon or often strayed into crime.

Most versions of Gil’s story describe him as a kind of Robin Hood who stole cattle from the rich to distribute it to the poor. The legend also says he took part in the 1864-70 war against Paraguay.

At some point, he was detained for his crimes and executed. But before he died, the story goes, he told the executioner that the man’s son was terribly ill and that he should pray for the boy’s health, invoking Gil’s name. The executioner did not believe the story, but when he arrived at his home, he saw his son at death’s door. Praying to Gil saved the child’s life. 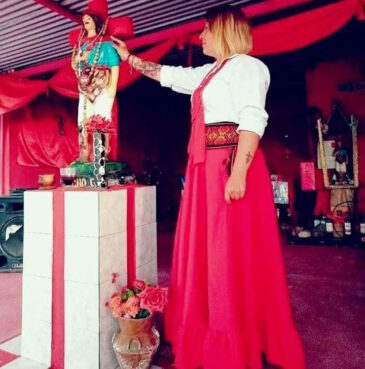 Thousands of people visit the Gauchito Gil shrine in Mercedes annually, but especially on Jan. 8, considered the anniversary of his death. Other sanctuaries have been established in his honor elsewhere.

“I was brought to know him a few years ago, during a difficult time in my life. I asked his help, and he conceded many graces to me,” Luz Norman, a faith healer who built a shrine to Gil in Buenos Aires, told Religion News Service.

Six years ago, Norman began her activity as a Gauchito Gil faith healer. “I asked him to cure people in his name and he has been making several miracles. Everything that I ask him for the people he gives us,” she said.

Norman’s chapel was built with donations from the people she helped. “A woman who had stomach problems came to the shrine and ended up healed,” she said. “A young man who suffered an accident and was using a wheelchair is now walking with crutches.”

Norman, who identifies as Catholic, has also been asking Gauchito Gil to help Argentina’s team win the World Cup.

So does Isabel Leguizamon, a 52-year-old devotee who lives in the city of Federal, not far from Gil’s native Corrientes. “We will win the Cup with his help,” she told RNS.

“Everything we ask him becomes true. I have never had any health problems and I have never been unemployed for too long,” she said. Graphic artist Ariel Exu Bara recently designed an Argentine soccer jersey with the image of Gauchito Gil on the front. “The same day I uploaded the picture of it on social media, Argentina beat Australia. Faith moves mountains,” he said.

Catholics may also appeal to canonical saints on Friday, when Argentina faces its next test. Belinky recalls when, years ago, a priest in her hometown of Rosario was asked to celebrate Mass and bless the pitch of a local club. “People thought some kind of witchery might have disturbed the club. After the blessing, the squad ended up victorious,” she recalled.

The story of la Difunta, which means “deceased,” concerns Deolinda Correa, a woman who lived in San Juan province, a desert region near the Andes. In 1841, during a battle between opposing political parties, troops invaded her village. After the military commander threatened to have his way with her, said Betty Puga, a spokesperson for the Difunta Correa Foundation, which runs the sanctuary in San Juan, “she decided to take her baby with her and left the town by foot. She walked for three days in the desert with no water.”

A group of horsemen found her body. Her baby was still nursing at his deceased mother’s breast. 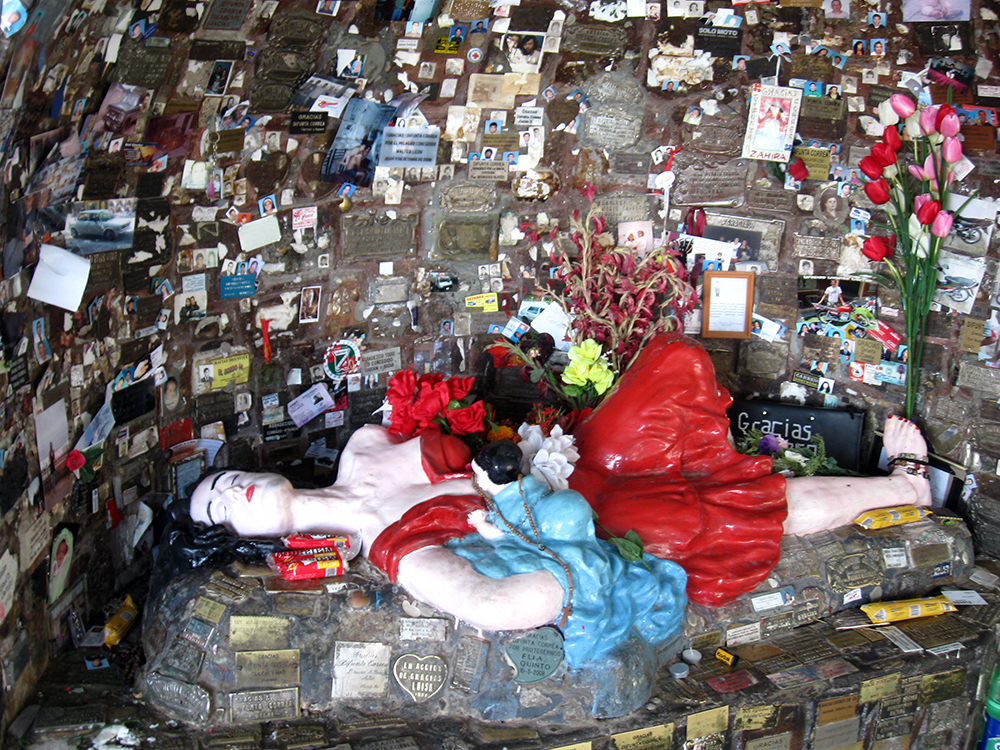 “After that, one of those men was taking 500 cows to Chile and lost them while crossing the Andes. He asked for her help, and the next day he found the cattle,” Puga said.

The town of her burial now has a hotel and restaurants that welcome more than 2 million visitors to her shrine every year. Processions of horsemen from other parts of Argentina, Chile and Brazil are common, especially during Holy Week.

At the shrine, people usually leave miniatures of houses and cars that they had been able to buy after praying to the Difunta.

Jerseys of soccer clubs are also visible there. “We have a jersey of Lionel Messi signed by all players of the Argentinian team,” Puga said.

Sculptures of la Difunta Correa and Gauchito Gil have been taken to Qatar with the team, she said.

While folk saints’ followings are associated with the poor, the statuary shows that even the rich are counting on la Difunta and Gil. “Not everybody has the money to go to Qatar to accompany the World Cup,” said Belinky.