(RNS) — Biblical scholars don’t normally get recognized by fans in public. Most labor in obscurity, pumping out academic monographs every few years and puzzling over ancient languages only a handful of people can read.

But earlier this year, as Dan McClellan was visiting Disneyland with his wife and three daughters, a man approached him to rave about McClellan’s TikTok channel and how much its videos had meant to him.

“Ooooh, Dad, was that one of your fans?” his oldest child ribbed him after the admirer walked away.

“This was mainly an opportunity for my 13-year-old to make fun of me,” McClellan told Religion News Service in a Zoom interview, taking the fame in stride.

Experiences like that, once unthinkable, are becoming more common for McClellan, who started his TikTok channel in the spring of 2021 to combat a sea of misinformation about the Bible and religion.

In just over a year and a half, the channel has attracted more than a quarter-million followers, drawn in by McClellan’s unique blend of fact-based nerdiness about the Bible and dry humor as he confronts other content creators’ dubious claims.

He has the rare ability to explain legitimate biblical scholarship to ordinary people. McClellan has several Bible-nerd publications to his credit, including a new open-access book published by the Society of Biblical Literature’s publishing arm and articles in academic journals such as the Journal of Biblical Literature and Biblical Interpretation.

All the while, his demeanor remains approachable — for his RNS Zoom interview, he sported a “Jurassic Park” T-shirt and sat surrounded by framed superhero comics on the wall behind him.

It’s that combination of serious scholarship and accessibility that fans appreciate, as he explains biblical scholarship in sharp, funny videos that usually run only a minute or two. 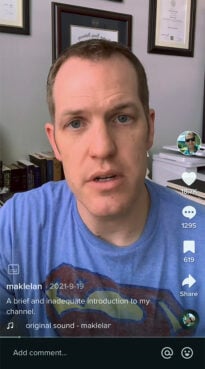 Followers are sometimes surprised to learn that McClellan is an active member of the Church of Jesus Christ of Latter-day Saints (a Mormon). In fact, his TikTok moniker, @maklelan, stems from his LDS missionary days in Uruguay 20 years ago. When Spanish speakers struggled with the Scottish name “McClellan,” he began spelling it phonetically as Maklelan to help them out. When he returned from his mission in 2003, the internet was just taking off, and he began using @Maklelan as a go-to username for all of his social media accounts.

McClellan is not only a member of the LDS Church but also a full-time employee; he’s a key player in its Sacred Materials Translation section. But he’s careful to separate that identity from what he does on TikTok, which is purely independent and on his own time.

“I’m not here to represent the church in any way, shape or form, or to speak authoritatively or representatively on their behalf,” McClellan explains in a “pinned” video in which he introduces himself.

Rather than acting as an apologist for the LDS Church, McClellan sees himself as a defender of facts. “Data over dogma” is the tagline for his channel and is proudly displayed on shirts in its merchandise store. Another shirt reading “Pure and utter nonsense” — one of McClellan’s catch phrases when debunking a Bible myth — is also available.

“This is not about being on anybody’s team,” McClellan said. The point of his TikTok channel is not to promote one religion over another or even to promote religion at all. He gets critical feedback from all corners — he’s been accused of being anti-religion and of being too Christian. “If the criticisms come from both sides, that’s probably a sign that I’m getting some balance,” he said.

In one recent video, McClellan responded to an anti-Catholic conspiracy theory about “crazy s*#t you did not know,” in which a fellow content creator made bizarre claims about the Vatican.

@maklelan: “No they didn’t. That photo is fake. Here’s the original. Next?”

@RedactAnomaly: “One of these artifacts was—”

@RedactAnomaly: “These artifacts have never seen a museum, and are most likely in a top secret base or a private collection—”

Not all of McClellan’s videos are like this, but the clips that directly confront false information tend to be the most popular. “Content that includes misinformation tends to spread the fastest, and there’s a need for someone of my background who can call balls and strikes.”

There was a point in his early adulthood when McClellan might have been the last person you’d imagine would one day become a biblical scholar. After flunking out of college in his first semester, he converted to Mormonism, and serving a mission turned his life around. He spent countless hours before and during his mission “learning about the Scriptures, the history, the languages.”

Upon his return, he went back to school and got an undergraduate degree in ancient Near Eastern studies from Brigham Young University. Two master’s degrees and a Ph.D. later, he’s well positioned to challenge misinformation online about the Bible.

In the early days of his TikTok channel, McClellan would search through new content on TikTok to find ones he felt he should respond to. Now, though, viewers tag him “50 to 100 times a day,” he said, asking him to answer this or that claim.

His video with the most views — more than 4 million and counting — takes on a creator exasperated with the BBC headline “God’s Wife Edited Out of the Bible — Almost.” The topic happens to be the subject that his own doctoral supervisor at the University of Exeter, Francesca Stavrakopoulou, wrote her thesis on.

“I went on to explain why she was exactly right,” McClellan said. “And within the first 24 hours it had a couple-million views, which was a fascinating experience, and also quite intimidating. Followers were suddenly coming in by the thousands.”

McClellan is branching out. He’s starting to produce content on YouTube, which accommodates longer videos and offers more possibilities for monetization. “Of the three platforms—YouTube, Instagram and TikTok — TikTok is the worst for monetization. It’s about a tenth of the others,” he said.

But YouTube content takes a great deal more time to produce, and McClellan is a one-man show, so it’s unclear whether it’s worth the effort. “I’m nowhere near the point where I could hire someone to do some of this for me,” he said. “With a full-time job and a family, it’s difficult to put in any more time than I already am.”

Still, the TikTok channel has brought new opportunities and audiences. In January, he’ll be teaching an online class on what the Bible has to say about homosexuality, with a suggested donation of $25. In June, he’s leading a tour group to Israel. He’s also thinking of expanding his presence on Instagram, which is “a very different audience” than that of TikTok.

But what’s most rewarding is the feedback from people like the fan at Disneyland. “I get a lot of comments from folks who tell me I have helped them, and also from other members of the guild who tell me I am doing good and important work in public scholarship. That’s been the most meaningful to me.”

“Despicable Me” creator on Mormonism, Minions, and “the best calling in the church”