That was the message a faith leader working with migrant women and children in Ciudad Juárez asked me to carry back to Congress when I met him on a recent visit to the U.S.-Mexico border. “Remind them that we are humans.”

It was a simple request to remember the human dignity of people moving between our countries in search of a safe place to live. A request to recognize that we share similar hopes for our families and children; that we are all connected in this world.

We heard this message echoed from people on both sides of the border — from volunteers working in migrant shelters and border patrol agents and local and international officials. It is easily forgotten in policy debates in Washington.

The border is some 1,954 miles long, running from Brownsville, Texas, to San Diego, California. In some places it’s marked by a looming metal barrier or a rushing river. In others, it’s a mere line in the sand or dried-up riverbed. In El Paso, where my colleague Anika Forrest and I received a tour from border patrol agents in October, the Rio Grande flows along the border and people cross on a daily basis through both official and unofficial paths.

Debates in Washington and the media decry a “border crisis” and provoke fear of an “invasion” of criminals and terrorists. But visiting the border offers a different perspective. It’s all about people.

As a Quaker organization, the Friends Committee on National Legislation is committed to working for a world in which the dignity and rights of people are recognized and upheld regardless of migration status, country of origin, race or religion. We believe there is that of the divine in each person. Importantly, we reject the notion that security is created through walls and force, or that our safety can be separated from the safety of others.

With that in mind, our border visit brought home just how broken the current migration policy is, and how much needs to be done. This is work Congress and the entire country need to prioritize. And it needs to begin with understanding the human experience of migration.

We met community leaders and volunteers in El Paso who have been working for decades to ensure that people who have made it north of the border have food, housing and the other support they need while adjusting to life in a new country. We visited with Catholic nuns in Ciudad Juárez who have dedicated their lives to taking care of mothers and their children trapped in a Mexico/U.S. border limbo waiting on permission to cross, often at their own peril.

We also spent time with migrants themselves, including a 6-month-old baby cared for by several of the women in the shelter. Many of those we encountered were fleeing desperate situations in their native countries for a chance of a safe, prosperous life for themselves and their children in the United States. Their resilience and dignity through so much turmoil was humbling and a clear reminder that asylum-seekers and migrants have always helped make our country strong and vibrant.

With growing numbers of people crossing the border recently, veteran border agents spoke of how their work has become primarily humanitarian, not a matter of law enforcement. New agents spoke of having to learn to issue emergency medical care, change diapers and support children within a system designed to catch “bad guys” and fight “criminals.”

Many policymakers, and much of the public, continue to believe that harsher enforcement of the law will reduce undocumented crossings. Congress is unwilling to even consider improving the inhumane realities of our migration policy without insisting on more money for so-called border security. For decades, billions of taxpayer dollars have gone into constructing a bigger and higher wall on the border and increasing surveillance. None of it has solved any problems.

There’s a lot Washington could do to create humane and effective migration management. Restoring the right to seek asylum for those fleeing persecution is paramount. We must stop outsourcing our responsibilities to Mexico. As long as people are forced to flee their homes because of violence, instability or economic desperation, migration will continue. Without addressing the reasons people migrate, no amount of funding for further militarization will help. It will only continue to harm. 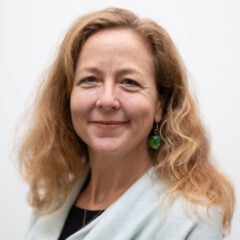 As we celebrate the holiday season, it is worth remembering that we are all bound by our common humanity. We need a rational, safe and humane immigration system that upholds the dignity and worth of each person. Once Congress comes to this same conclusion, millions of people on both sides of the border will be safer.

(Bridget Moix is the general secretary of the Friends Committee on National Legislation and leads Friends Place on Capitol Hill and the FCNL Education Fund. The views expressed in this commentary do not necessarily reflect those of Religion News Service.)