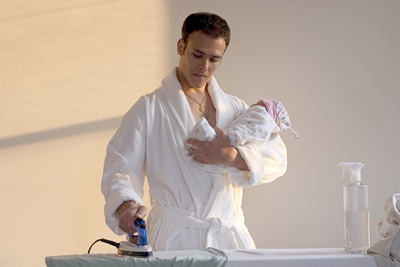 We begin with some apparent no-no's.

Is yoga kosher for Catholics? A priest in Britain says no because "it can be seen as Hindu meditation or as relaxation."

If you're a Catholic stay-at-home dad, I guess you shouldn't compound the problem by doing yoga.

And it's not clear which group is growing faster, stay-at-home dads or Unitarian Universalists.

The word from one Vatican source has it that Pope Benedict XVI will pardon his former valet, Paolo Gabriele, who takes the stand today at his trial.

This one hits home. Ecumenical News International announced Monday (Oct. 1) that its ENInews service is suspending operations due to well, not enough cash. ENI has a co-publishing agreement with RNS.

Descendants of accused witches in Connecticut want the state to own up to horrendous 17th century crimes: the killings of their ancestors.

Also from the desert kingdom, health officials say a new version of the SARS virus shouldn't affect the more than 1 million Muslims set to embark on the annual Hajj pilgrimage.

A second prominent Pakistani places a bounty on the head of the producer of the anti-Islamic "Innocence of Muslims." Russia has now banned the film.

Fact: Mormons tend to be healthy. The Salt Lake City Tribune explores what science has to say about the LDS health code.

The two largest American Christian broadcasters have their cameras trained on the Mount of Olives to get those first images on the Messiah, and are doing their utmost to convert Israeli Jews.

And Amazon.com has stopped selling a jigsaw puzzle of the Dachau concentration camp.

Days to the election: 33. You thought this was going to be an election-free roundup? NPR says God has left the campaign trail.

If RNS had a catalog, we wouldn't airbrush you out. So sign up for the Religion News Roundup, delivered straight to your inbox.