Syracuse University requested the special seating for the Dalai Lamas, spiritual leader of Tibet, who spoke on campus Monday (Oct. 8), and it?s obvious he enjoyed the spacious accommodations. As he should. The red leather and wood Stickley chair was made especially for him ? three times.

Mitt Romney’s March to the Middle may be muddying the waters on what he thinks about abortion rights. The candidate and his campaign seemed to be saying different things yesterday.

Does it matter? Gallup finds that for the first time, a majority of Americans, 52 percent, say the government “should not favor any set of values in society.” About 44 percent believe it should promote “traditional values.”

“Our concern is that Ryan and his Catholic supporters must be informed—as pro-choice candidates and Catholics who vote for them are perennially and appropriately reminded—that some of his positions are fundamentally at odds with the teachings of the Catholic Church,” reads the statement, titled “On All of Our Shoulders.”

As in, Atlas shouldn’t shrug.

A top lawyer with the conservative Christian American Center for Law & Justice (ACLJ), founded by televangelist Pat Robertson and led by Jay Sekulow, has been fired after it was discovered the married father of eight was allegedly finding gay sex partners online.

Sekulow may want to stick to hiring family members.

Speaking of vice-presidential candidates, Sarah Palin’s dad, Chuck Heath Sr., sheds light on Sarah’s spiritual upbringing in an interview with David Brody. He says she got her spirituality from her mom, since he doesn’t go in much for the religion stuff:

Chalk up another one for the “Nones.”

Chuck also said “there's been so much baloney written about her.” Deli meats seem to be the last thing Palin has been eating. The newly lean and frosted Republican star tells People she is writing a “book on fitness and self-discipline.” 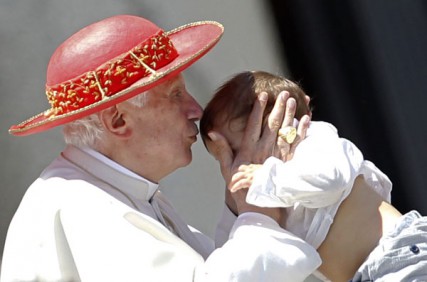 A new study on vocations to the priesthood shows that a significant minority of young Catholics have “very seriously” considered taking vows, but rarely received encouragement. Buried lead: celibacy is still the biggest obstacle.

Is the British monarch the ‘Defender of the Faith’ or ‘Faiths’?

Follow-up question: does she have a cool Stickley throne like the Dalai Lama? (See above)

Finally, Reuters Rome photographer Max Rossi says the pope “kisses more babies than any mother over the course of her life,” and over 15 years at the Vatican he has the photos to prove it – like the one above, of Benedict XVI.

Pass it on. And get this Daily Religion Roundup every day free – just put your email in the box below.