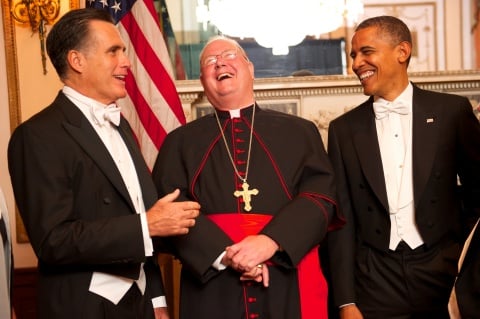 President Obama and Mitt Romney squared off, gently, at last night's Al Smith Dinner in New York, seated on either side of Gotham Cardinal Timothy Dolan. Full video here, and a run-down here. 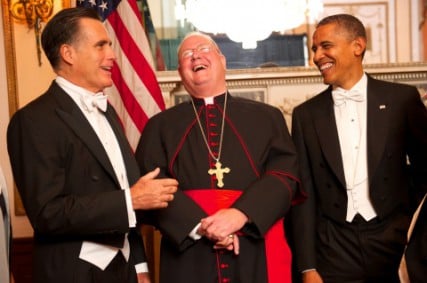 Billy Graham is getting surprisingly political at age 93, all but endorsing Mitt Romney last week and now buying ads urging people to vote for "candidates who base their decisions on biblical principles and support the nation of Israel. I urge you to vote for those who protect the biblical definition of marriage between a man and a woman." We're pretty sure he means Romney there.

Popular evangelical author Rachel Held Evans is in a knock-down fight with Southern Baptist-affiliated LifeWay Bookstores over their decision not to stock her book because, she claims, she talks too much about her, um, lady parts.

The Charleston-based Episcopal Diocese of South Carolina is filing divorce papers with the Episcopal Church.

The AP says pastors were among those who helped shield abusers within the Boy Scouts, according to Thursday's release of thoundands and thousands of the Scouts' "perversion files"

Yet another federal appeals court has struck down the Defense of Marriage Act, which prohibits federal recognition of same-sex marriages. More than half of Latinos now support gay marriage, according to new Pew data.

Conservative icon Dinesh D'Souza has resigned as president of evangelical The King's College in New York City after admitting he was running around with a woman who was not his wife.

An Army court ruled that Nidal Hasan, the alleged Fort Hood gunman, must shave his religiously inspired beard, or someone will do it for him.

Outgoing Archbishop of Canterbury Rowan Williams is making one final push to get the Church of England to allow women bishops.

Hajj pilgrims are welcoming a new (required) meningitis vaccine that allows them to enter Saudi Arabia, but not everyone is convinced that it's pork-free.

Doctors in England say Malala Yousufzai, the 14-year-old Pakistani girl who was gunned down by the Taliban for having the temerity to advocate for girl's education, say she's standing up, talking and writing.

A world-renowned Turkish concert pianist is denying charges of "explicitly insulting religious values" when he tweeted part of a 1,000-year-old poem that preaches against pious hypocrisy.

And with that, it's on to the weekend, but before you go, be sure to make sure you're subscribed to receive the RNS Religion News Roundup, every day for free, in your inbox.