NEWTOWN, Conn. (RNS)  Four days after a gunman killed 20 schoolchildren and six others inside Sandy Hook Elementary School, boxes of books showed up at the Newtown public library.

Staff at the Cyrenius H. Booth Library, who were just beginning to comprehend the massacre, accepted the boxes from a man who said he was from Aetna headquarters in Hartford. 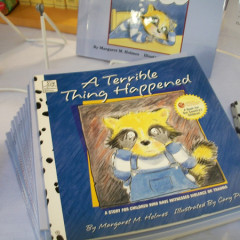 The public library in Newtown created a “Books Heal Hearts” program after receiving thousands of donated books from around the country on healing and grief. RNS photo courtesy Ann Marie Somma/HartfordFAVS

Kevin Kearney had loaded up his pickup truck to hand-deliver 620 copies of Ellen Sabin’s “The Healing Book.” A life insurance manager at Aetna, Kearney felt Sabin’s book would be helpful to a community that had experienced one of the deadliest school shootings in U.S. history.

Kearney had met the author in 2009 at a life insurance conference, and Aetna has since been purchasing and donating her book to bereaved Aetna policyholders, especially families with children. Sabin’s book is structured like an activity journal so that children can express and record their feelings and memories of someone who has died.

“This book stood out for me. It creates a legacy of a lost loved one and it also gives children a process to get through the loss,” Kearney said.

What the library staff didn’t know at the time was that Aetna’s donation would be the first in a flood of donated books, numbering in the thousands, to arrive at the library in the days and weeks following the Dec. 14 tragedy.

Books have come from all over the country — from authors, publishers, and ordinary people buying multiple copies of books on Amazon.com that they had found helpful in their grief.

“People are taking the books home by the bagful,” children’s librarian Alana Bennison recently told a woman calling from New York who wanted to donate money to the library to purchase more books.

Soon after the tragedy, Bennison realized the library had to set up a special fund to handle the money and books donated to the library. The outpouring was so overwhelming that she created the “Books Heal Hearts” project where all donated books are given away free of cost to the community and wherever there is a need.

“I know that books can help people get through the darkest times. I knew we needed to give them away to people. People can take them home, write in them and know that they don’t have to give them back,” Bennison said.

There is a book for everyone. Books focus on many different topics and subjects, from proof of heaven to fairies who turn sadness into wonderful things. There are children’s books about a little boy’s journey to heaven and back during surgery, and adult books such as Nina Sankovitch’s memoir “Tolstoy and the Purple Chair,” about how literature helped her get through her older sister’s death.

Library staff said the most popular donated book is “Tear Soup,” a children’s book by Pat Schwiebert and Chuck DeKlyen about a woman who suffers a terrible loss and makes tear soup to help her heal.

DeKlyen, who co-authored the book with his mother, said since Dec. 14, more than 1,000 copies of the book have been purchased and donated to the Newtown library, mainly through griefwatch.com, a nonprofit he runs with his family in Portland, Ore.

DeKlyen said the response has been so overwhelming that his website is asking for donations to help cover the cost of shipping the books to Newtown.

“The book is universal in that it contains recipes for our healing process through any type of grief from a friend moving away to the shootings in Newtown,” DeKlyen said.

Bennison said the library is overwhelmed with book donations, and asks anyone who wants to donate multiple copies of books to call or email the library first. She said it’s important for the community to begin to heal and move past the tragedy.

“We don’t want to become a grief memorial library,” she said.

(Ann Marie Somma is the editor of Hartford Faith & Values.) 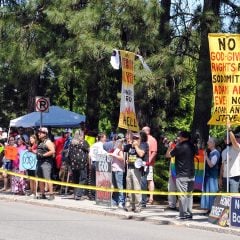 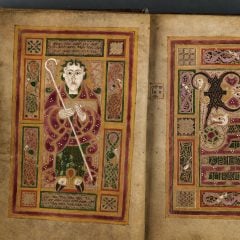 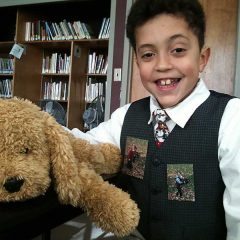 Opinion
On the anniversary of Sandy Hook, a mother’s gratitude for her child’s faith
Follow us on Facebook!
Submit your photos to RNS