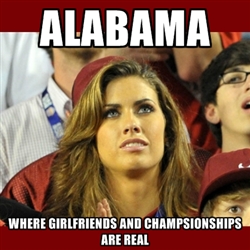 Lance Armstrong admitted to doping. No surprise. But did he confess?

Slate’s William Saletan has a critical analysis of how Armstrong’s fell short of an actual examination of conscience, much less penitence.

The Manti Te’o fake dead girlfriend story continues to evoke all sorts of reactions – like the snark from Alabama – as we try to figure what is real, and what it means.

Is this bad for Notre Dame? (Which means bad for Catholics.) Bad for the LDS? (Te’o is a Mormon.) Bad for gullible sports journos? Or bad for all of us, who showed how desperate we are to believe in heroes any heroes. (See above: “Armstrong, Lance”)

Melinda Henneberger wonders why Notre Dame – and the public – are more concerned with a fake dead  woman than a real dead woman.

Need a real sports hero to believe in? Rod Dreher (who also posted the ‘Bama photo) has one.

Our own Rabbi Jim Rudin wants the president to ditch all the Bibles for the inauguration.

A day after the inauguration is the 40th anniversary of the Roe v. Wade decision legalizing abortion. Are abortion foes winning – or losing? Answer: Yes!

Jeanne Monahan, the new head of the annual March for Life, which will blanket the Mall on Friday, Jan. 25, talks to Adelle Banks about the next generation of pro-lifers.

The Catholic pope’s portraitist is an Orthodox Christian, and a “diplomat with art.”

Less diplomatic is the guerilla campaign to see who will – or will not – be the next U.S. ambassador to the Vatican.

Ireland’s scandal-tarred cardinal gets a successor.

Some health workers have religious objections to getting flu shots and helping protect their patients. I think there’s a disconnect in there somewhere.

Good Read of the Day: Emily Brennan takes to the pages of Religion & Politics (bookmark that site) to examine the work American evangelicals are doing in Haiti's orphanages.

Visit us every morning for the latest in religion news, or load your email in the box below and we will come to you, free.