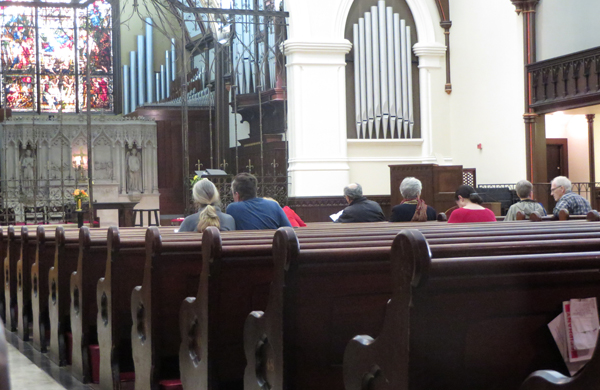 Church members attend a concert at the Episcopal Church of the Epiphany in downtown Washington, D.C., on Tuesday (Oct. 15). RNS photo by Kevin Eckstrom

In shutdown news, Congress is still seeking a budget and debt ceiling deal. CBN's Pat Robertson has called on the GOP to end the shutdown, warning that a default would be catastrophic.

A Navy priest has sued over right to celebrate Mass during the shutdown.

Don't miss the story about an orphan in Florida who goes to church and asks someone--anyone--to adopt him, as reported by the Tampa Bay Times. I won't give away the ending so you'll have to read it.

Pope Francis has sent a gift of 200 Euros to an elderly Venetian woman who wrote him after she had been mugged, according to the Catholic Herald. As new domain names are being rolled out, the Vatican has grabbed control of .catholic.

French Catholics have been reciting a version of the Lord's Prayer that could be considered blasphemous, the country's bishops have concluded after years of debate, and a new version has been approved.

A woman has filed a wrongful-termination lawsuit against InterVarsity Christian Fellowship, saying she was fired because of her divorce even as two male colleagues kept their jobs as they went through divorce and remarriage.

The Church of Sweden elected a woman as its leader for the first time in the church's history.

Hundreds of people are dying as Nigeria’s security forces crack down on an Islamic uprising in the northeast, Amnesty International says.

Here's a photo gallery from the AP of Muslims marking Eid al-Adha.

And for listening, NPR's Morning Edition has a piece on Appalachian church music.