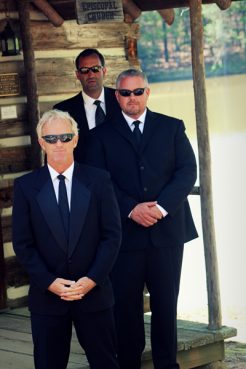 (RNS) They’ve rescued bars and restaurants and shabby houses, but this month reality television stars are set to rescue something new.

“The Church Hoppers exist to build balance in church through systems, business and marketing,” said Lockhart, who like his fellow rescuers comes out of the Southern Baptist Convention.

“Systems being people in the right places motivated to be as efficient as they can be for the work of the ministry; business being all of the ministry resources channeled in all the right directions, making sure everything is conducted with integrity; marketing is going out into the community.”

The trio travel across the United States to assist failing churches, using “the wisdom of Scripture and a little Southern ingenuity” along with some red-faced shouting at obstinate pastors.

So far, six episodes are planned, although the Church Hoppers said they hope to film additional shows. Their targets include a Full Gospel church, a biker church, a cowboy church and even a synagogue.

In the first episode, “Country Salvation,” the Church Hoppers visit a four-hour-long service at a “Bapticostal” church in North Carolina that meets in a sweltering sanctuary with no air conditioning.

They have seven days to fix the decrepit building and to persuade Pastor Larry Roseboro to work with the church he has instead of dreaming of a new sanctuary.

“If I have to spend money on this old building, you might as well forget it!” Roseboro tells them. “First, I’m in charge here. Me and God. What are you going to do about it if I say no?”

The Church Hoppers quote Scripture as they try to reconcile the pastor to both his current sanctuary and an estranged deacon.

The three ministers had run their North Carolina-based church consulting company for nearly three years when they pitched the idea to a production company. The show was a natural fit to air on the National Geographic Channel because it showcased an array of church cultures, Annas said. 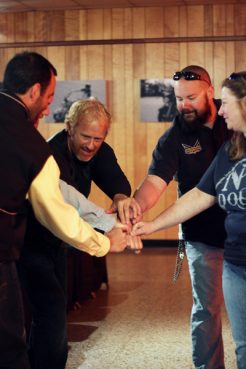 The Church Hoppers said they believe the show will make a difference for good.

“One of the things we expressed to the producer and was ultimately carried through to National Geographic was that we cannot risk our reputation as Christian consultants for a television show,” Annas said. “We feel like God gave us the platform of ‘Church Rescue’ on the National Geographic Channel to let churches all over the planet know there is a consulting company that cares about … helping them to do best whatever the community needs.”

The Church Hoppers also said they hope the show will encourage the “unchurched” to seek out a spiritual home.

“Every time we would walk into any ministry, any church, we always saw something that’s been in every church, and that was God,” Bentley said. “Whatever was going on in those churches, we went in to embrace it.” Hinduism
‘The Story of God’ shares Morgan Freeman’s questions of faith
Follow us on Facebook!
Submit your photos to RNS