I skipped the recap last week because I was in Israel and Palestine. Here’s that double whammy I promised. Let’s start with news from the interwebs. 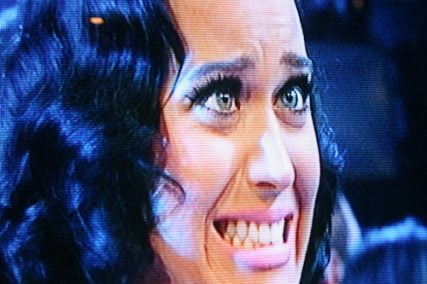 Katy Perry ignited controversy with her new video for the song “Dark Horse,” in which the pop star uses a laser to disintegrate a man wearing a pendant bearing the word “Allah.” A Change.org petition demanding that YouTube remove the video garnered more than 65,000 signatures, resulting in “Allah” being digitally removed from the scene. Giant Islamophobic conspiracy...or innocent mistake?

Speaking of Islamophobia, remember that controversial (and just plain awful) “Innocence of Muslims” video clip that prompted global protests in 2012? A U.S. court ordered Google to remove it from YouTube last week---not because of blasphemy, but a tenuous copyright claim. Google plans to appeal the order.

In offline censorship news/nonsense, a reformist newspaper was shut down in Iran and its manager jailed for "spreading lies & insulting the holy precepts of Islam.” Following Malaysia’s terrible example, Brunei will begin penalizing non-Muslims for using “Allah” and 18 other holy words. The country’s billionaire sultan ordered social media users to stop attacking his decision to introduce harsh shariah punishments, including death by stoning, on April 1. Wish this one were an April Fools’ joke.

Muslims in France are mad as hell and they’re not going to take it anymore! A legal defense group is suing satirical newspaper Charlie Hebdo for blasphemy after it published a front page headlined, “The Koran is shit.” In a separate case, an MP is being sued for "offending the honour and dignity of the Muslim community" by accusing young Muslims of anti-Semitism.

Also being accused of anti-Semitism? Denmark. The European state banned ritual slaughter last month, citing animal rights. Jews and Muslims are fighting for an exemption to the law, and the country’s agriculture minister says he’s open to reviewing scientific studies that claim kosher and halal slaughter methods are humane.

In Israel (where I recently learned that only some McDonald’s are kosher---others serve cheeseburgers), the Knesset passed a controversial law to distinguish between Muslim and Christian Arab citizens. Opponents are calling it an attempt to “divide and conquer.”

Across the Green Line, Hamas criticized a decision by the Palestinian Authority to drop religion from identity cards in the West Bank.

Notice there’s no data for North Korea. Trust me, it’s bad. An Australian missionary was detained there last month for leaving Christian pamphlets in Buddhist temples. North Korea expelled him, partly due to his age. American missionary Kenneth Bae hasn’t been so lucky.

The Central African Republic is orange on Pew’s map. Expect it to turn red in next year’s report as Christian militiamen continue to hunt down Muslims.

Burma is rightfully red. Social hostilities are high, and the government seems to be making matters worse. Fortify Rights says it has evidence that the state is systematically discriminating against Muslim Rohingyas. Last week Burma ordered Doctors Without Borders to leave the conflict zone of Rakhine state.

To save me a few thousand words, I’ll let Peter Montgomery at Religion Dispatches take it from here with his Global LGBT Recap. In summary: Africa, Africa, Africa.

In the U.S., Arizona Gov. Jan Brewer vetoed a controversial bill many dubbed “anti-gay.” Despite no mention of homosexuality in the text, RNS blogger Tobin Grant writes:

“The Arizona religious freedom bill became an anti-gay bill because the bill’s backers agreed with the opponents that the bill was about gays. Backers saw gays as a threat to religious people; opponents saw expanding religious liberty as a threat to LGBT rights. Backers of the bill may want to blame the media or gay rights groups, but they should look first to the rhetoric and beliefs of their own supporters.”

I’m suffering from same-sex news fatigue, mainly because there’s just so much of it coming out of state legislatures. Allow me to summarize some other headlines from the past two weeks by linking to my Tweets:

Same-Sex Parenting (and marriage) Goes On Trial In Detroit http://t.co/CHInTyXLnk

Is religious freedom being used to chip away at LGBT rights? http://t.co/gNGr68dwg4

That’s enough of my smiling mug for now.

Despite what you learned in history class, God wrote the Constitution (according to former House Majority Leader Tom DeLay). S/he apparently forgot to sign it.

The Theocratic Republic of Alabama approved a bill that would require public school teachers to lead kids in prayer despite a majority of the House Education Policy Committee voting against it. Because democracy is dead? Some state legislators want the Ten Commandments to be hung in schools as well.

A bill in Missouri would require schools to notify parents if evolution is being taught in the classroom, as though the word “Biology” on a student’s schedule doesn’t already do that.

Muslims may be divided over whether schools should close for Eid holidays, but Hindus in New Jersey are pretty sure they want a day off for Diwali.

“What’s most troubling to me is the casual abuse of the venerable concept of ‘religious freedom’ in order to secure the right to refuse, on dubious scientific grounds, an effective and important public health measure, particularly when very few Americans practice any form of organized religion that specifically proscribes vaccination.”

In related, heartbreaking news, a Pentecostal faith healing couple was sentenced to several years in prison for neglecting to take their sick son to the doctor. Two of their children have died from this kind of negligence since 2009.

I wrote some stuff:

Should anti-gay churches have their tax-exempt status revoked? Join the debate! But please don’t threaten to drag me out in the street and shoot me, as one troll basically did. Thanks.

This one’s less controversial (I hope). Brian J. Grim makes the business case for religious freedom in a Q&A about his new Religious Freedom & Business Foundation.

Don’t expect a Recap next week or the following. I’ll be at KAICIID in Vienna then the International Media Conference in Burma, where Internet access is dicey to say the least. As always, you can track the latest religious freedom news on my Twitter feed @brianpellot. Subscribe below so you get the next recap once I’ve emerged from this impending Internet blackout (sorry, I’m being dramatic).