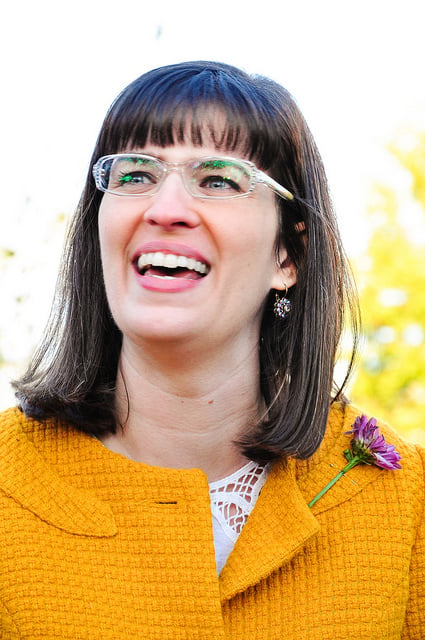 Kate Kelly, founder of the Ordain Women movement, has been excommunicated for her views on gender inequality in the Mormon Church.
June 24, 2014
Brian Pellot

On the same day news broke that Sudanese Christian Meriam Ibrahim had been cleared of apostasy charges, the Mormon Church excommunicated Kate Kelly for the same offense. The church’s obsession with controlling its image amounts to short-sighted censorship.

On Monday a panel of Mormon judges excommunicated Kate Kelly, an international human rights lawyer and advocate for women clergy, on the grounds that her conduct ran “contrary to the laws and order of the LDS Church.” In short, she was kicked out of the church for apostasy.

I’ve always marveled at the Mormon Church’s ability to control its image and message online and in the streets. Whenever I so much as mention the church in a blog post or tweet, I’m overwhelmed with friendly messages from folks at ldschurch.org. I doubt this post will be met with the same reaction.

In obsessive attempts to to control its message, the Mormon Church seems to have lost the plot.

A church leader told Kelly by email, “In order to be considered for readmission to the Church, you will need to demonstrate over a period of time that you have stopped teachings and actions that undermine the Church, its leaders, and the doctrine of the priesthood.”

So she might be allowed back in if she obediently shuts her mouth and closes her eyes to what she sees as systematic inequalities within her faith community and hierarchy. If she and other critics choose to self-censor. If they blindly go along with the idea that women are somehow inferior to men and that gay marriage is anathema to God’s will. Then maybe they’ll be forgiven.

When talk of an impending Mormon purge emerged two weeks ago, my fellow RNS blogger Jana Riess and more than 60 Mormon bloggers and podcasters drafted a statement calling for “a more creative, constructive solution” than excommunication. The statement, titled “Room for All in this Church,” said:

“...we believe that excommunication is not the best way to address conflict over doctrine, policy, or tradition. We ask our leaders to consider other ways of maintaining boundaries, strengthening Church members, and encouraging them to grow spiritually within Mormonism’s large and embracing community without the fear and despair the threat of excommunication sows…”

Their message seems to have been ignored. The threat of excommunication has become reality. Fear of speaking freely and questioning church doctrine has only been heightened.

In a separate post written before Kelly's excommunication, Jana wrote:

“If the point of these pending excommunications is to strike fear in the hearts of other Latter-day Saints who love the Church but do not always agree with it on matters of social justice, then it has already failed. For Zion’s sake, and for my own, I will not keep silent.”

The Mormon Church’s obsession with silencing critics is short-sighted and surely a sign of weakness. How else are we to interpret a situation in which leaders fear criticism, questions and demands?

The church must realize that the more critics it purges from within, the more it will gain from without.