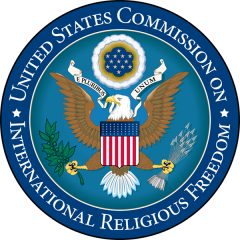 The United States Commission on International Religious Freedom was created in 1998 as an independent, bipartisan body.

The list of “countries of particular concern” had remained unchanged since 2006 — and hasn’t been formally issued by the State Department since 2011 — when Burma, China, Eritrea, Iran, North Korea, Saudi Arabia, Sudan and Uzbekistan were cited.

In April, the U.S. Commission on International Religious Freedom recommended that the list be doubled to include Turkmenistan, Tajikistan, Vietnam, Pakistan, Syria, Iraq, Nigeria and Egypt. Turkmenistan was the only new addition to this year’s CPC list, bringing the total to nine countries.

The State Department and the independent USCIRF have often been at odds on who makes the list of worst offenders, and in a statement, USCIRF noted the “disappointing omission” of Pakistan in particular.

“Pakistan represents the worst situation in the world for religious freedom for countries not currently designated by the U.S. government as CPCs,” said USCIRF Chair Katrina Lantos Swett. On Sunday (July 27), a violent mob torched at least eight homes in an Ahmadi Muslim neighborhood in eastern Pakistan after a member of the minority sect was accused of posting a blasphemous photo online. A woman, two children and an unborn baby died as a result of the blaze.

Ahmadiyya Muslim Association UK reports that since 1984, 244 Ahmadis have been murdered in Pakistan because of their faith. Ahmadi Muslims are considered heretics in Pakistan, and it is a criminal offense for them to identify as Muslim. Those who do may be subject to harsh anti-blasphemy laws, which include the death penalty among other punishments.

Other religious minorities, including Shiite Muslims, Sufis, Christians, Hindus, Zoroastrians, Sikhs, Buddhists and Baha’is, have also been subject to attack in the Sunni-majority state.

Syria was also left off the CPC list, even as the country’s civil war continues to devolve along sectarian lines. Militants from the Islamic State have persecuted Syria’s Alawite Muslim sect and Christians in Syria and Iraq. The extremist group’s recent ultimatum to Iraqi Christians in Mosul that they convert to Islam or face execution will likely bring further pressure on the State Department to add both countries to its CPC list next year.

USCIRF also welcomed Monday’s nomination of a new ambassador-at-large for international religious freedom, Rabbi David Saperstein. If confirmed by the Senate, Saperstein would be the first non-Christian to hold the position since its inception in 1998. The post has been empty since October.