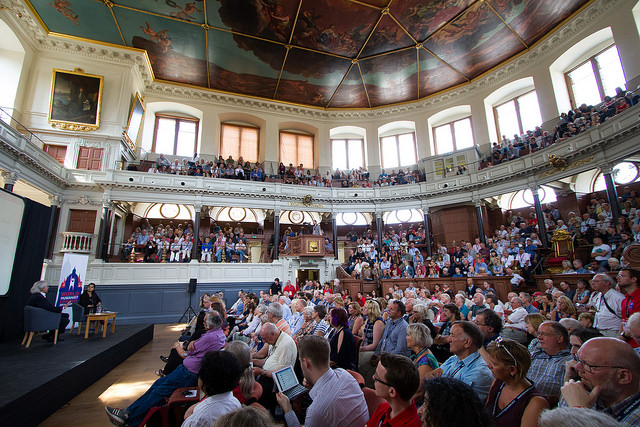 This weekend, the World Humanist Congress brought 1,000 delegates from 67 countries together in Oxford, U.K., to explore the most pressing challenges to freedom of thought and expression.

Along with their lack of religion, many delegates shared a legally protected right not to be offended in their home countries, a “privilege” they enthusiastically pledged to abandon.

Delegates passed the Oxford Declaration on Free Thought and Expression, which states: “There is no right not to be offended, or not to hear contrary opinions.” Despite the alarming fact that 47 percent of countries have laws penalizing blasphemy, apostasy and/or defamation of religion, there is indeed no fundamental human right not to be offended in international law.

The declaration relies heavily on Articles 18 and 19 of the Universal Declaration of Human Rights, which together guarantee the right to freedom of thought, conscience, religion, opinion and expression.

The declaration’s section on the right not to be offended states:

“Respect for people’s freedom of belief does not imply any duty or requirement to respect those beliefs. The expression of opposition to any beliefs, including in the form of satire, ridicule or condemnation in all media and forms is vital to critical discourse and any restraint that is exercised in this expression must be in accordance of article 29 of the Universal Declaration of Human Rights, namely to protect the rights and freedoms of others. The best response to the expression of a view we disagree with is to reply to it.Violence and censorship are never legitimate responses. All laws that criminalise language on grounds of ‘blasphemy’ or of offence to beliefs and values impede human freedom and should be abolished.”

These are important words, and I fully agree with the “We respect the believer but not necessarily the content of the belief” sentiments expressed.

In his 2009 book Giving Offence, cartoonist Martin Rowson, who spoke at the congress, writes, “In the Babel of conflicting human opinions, the right to be offended is just another tactic to win an argument by compelling your opponent to shut up because what they say is offensive.” Rowson says religion is often cited in the course of this silencing.

In the companion title Taking Offence, Caspar Melville suggests that “the right to offend is part and parcel of our world, but we must choose our targets with care and know why we are doing it.”

Other sections of the declaration I find particularly interesting (they’re all important) state “No one anywhere should ever be forced into or out of a belief” and “Freedom of belief is absolute but the freedom to act on a belief is not.”

Genuine belief, by its very nature, cannot and should not be forcibly applied to or deprived an individual. Governments and societies can’t make people believe something they don’t. They can only force them to pretend, which accomplishes homogeny at the expense of freedom.

Restricting one’s freedom to act on particular beliefs is obvious and necessary to protect the rights of others. If my beliefs tell me to kill you, your right to life should hopefully save the day.

You can read the full declaration here.