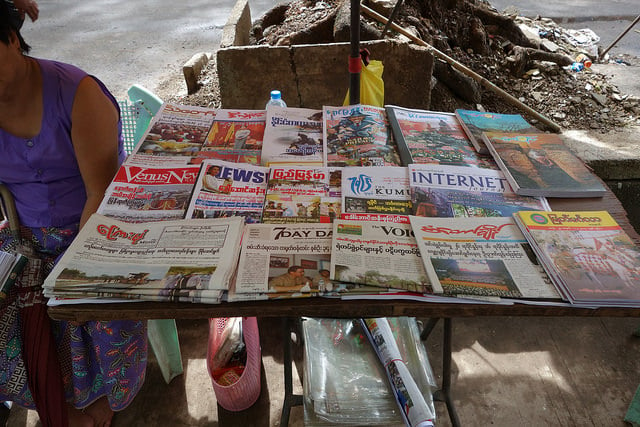 Whether your vice was too much candy or too much pumpkin cider, Happy Halloween Hangover. My costume paled in comparison to last year’s zombie panda, so I won’t even bother sharing it.

I’ve been working from China, Burma, Malaysia and Thailand for the past month as we gear up for journalism trainings in Yangon. I’m now back in Northern Burma attempting to write this month’s recap over some VERY loud public service announcements outside my window.

My hotel in Mandalay offered the following disclaimer upon arrival: Oh well. The Tazaungdaing festival balloons in Taunggyi should more than make up for this morning’s distractions. PS that’s the only new photo you’re going to get this week. The Internet is too slow in Burma to upload any more. Sorry.

Brittany Maynard, a terminally ill woman in Oregon, ended her life over the weekend. Her decision is a religious freedom issue because some groups, like the Roman Catholic Church, consider physician-assisted dying a slippery slope to actively killing vulnerable people, which seems far-fetched, but there you have it. Physician-assisted death is legal in just five U.S. states.

Despite SCOTUS, the Constitution and common sense, students at public schools continue to be punished for not standing during the Pledge of Allegiance, because some things never change.

An inmate in California won nearly $2 million when a court ruled that the state violated his religious freedom rights upon jailing him for refusing to submit to a “higher power” during a drug treatment program. A Pastafarian inmate in Nebraska is suing to be able to wear a pirate costume, because religious freedom. I’m sure we’ve all seen stranger religious garb.

Atheists for Human Rights is suing for the right to perform marriages in Minnesota. The group is based in a geodesic dome. Their phone number is 612-DAMN-Y’ALL. Just FYI.

On the LGBT front, Utahns (...best demonym...) are apparently split on same-sex marriage, but most agree that it wouldn’t affect their own marriages, presumably because few expect their spouses to leave them just because gay marriage is suddenly on the table. Those who do hold this fear might want to address bigger concerns in their relationships.

Frank Schaefer, the Methodist pastor who was defrocked for officiating at his gay son’s wedding seven years ago, was officially refrocked, which I thought happened in June, but now it’s official official.

Russell Moore, president of the Ethics and Religious Liberty Commission of the Southern Baptist Convention, apparently thinks it’s ethically sound to confuse the heck out of trans people.

“God” changed his tune in Westboro country, telling Topeka just how much he loves gays. Westboro’s not buying it.

Houston’s losing religious friends left and right. First the mayor tried to get her hands on the sermons of pastors who oppose an ordinance that would ban discrimination against LGBTs (she dropped the subpoenas amid backlash), then a U.S. marshall harassed a Sikh woman for bringing her ceremonial kirpan knife to court despite the fact that she’d gotten prior approval to do so.

In Canada, a Pastafarian minister lost his driver’s license when he refused to remove a holy colander for an official photo.

A Hindu group is calling on “Lord Vishnu” beer to change its name in Brazil.

I lived in some sketchy places last month.

Myanmar (Burma) and Malaysia are both abusing sedition laws to crack down on dissent.

Myanmar’s Rohingya crisis shows no hope of improving. More than 100,000 members of the predominantly Muslim ethnic group have fled the country to escape state-backed persecution. Take a look at photos from this IDP camp to see just how bad it’s gotten.

Puppy petters are being persecuted in Malaysia after an event aimed at teaching Muslims how to properly handle dogs prompted the government to overreact. The event organizer has faced death threats online, but some on social media are coming to his defense.

In crazier news, the Malaysian state of Kelatan plans to start enforcing a law that requires men to attend Friday prayer or face up to a year in prison. The country’s fatwa council also banned Muslims from celebrating Halloween. Don’t be surprised if they issue a blanket ban on fun in the coming year.

China plans to crack down on “illegal cults” after sentencing two members of the Church of Almighty God to death for fatally beating a woman in Zhaoyuan. Despite strict restrictions on religious worship in the officially atheist country, Christianity and Buddhism are flourishing.

How do you stop public urination in India? Make it blasphemous by putting ceramic tiles of Hindu deities all over the place right at piss-level. I’d suggest London try this, but it’s a pretty Godless town. Tiles of monarchs or politicians would only encourage some Brits to drop trow.

In Uttar Pradesh, India, Christians are reportedly being “re-converted” to Hinduism with threats.

Kyrgyzstan is tightening its religion laws, requiring groups to register or disband. It’s still one of the best “stans” when it comes to religious freedom, but when your competitors includes Turkmenistan, Uzbekistan, Tajikistan and Pakistan, that’s not really saying much.

The burqa debate is still heating up down under. In early October, burqa-clad women were ordered to sit in a special shielded area when visiting Australia’s parliament. When opponents said the new rule amounted to segregation, it was reformed. Activists then showed up to parliament in a KKK hood, a motorbike helmet and a niqab to protest burqas in public spaces.

Saudi officials faced international outcry when it emerged that a Shia leader had been sentenced to death on charges of “sedition and adding to unrest.” A Saudi cleric then, with no hint of irony, called Twitter the "source of all evil and devastation," apparently forgetting his own country’s devastating human rights record.

Life is particularly hellish if you’re a religious minority under ISIS control. Around 4,000 Christians left Mosul for Jordan in the last three months to escape Islamic State fighters. Those that remain are pondering their future. Although media attention has shifted, the situation remains terrible for Yazidis, too.

How bad could it really be? ISIS fighters reportedly crucified a Syrian teenager for taking photos, so I’d say pretty bad.

Not wanting to be stigmatized as jihadists, men in southeast Turkey are shaving their beards in droves. Sad it’s come to that, but I can’t say I blame them.

Turkey arrested a woman on suspicion of blasphemy after she tweeted a photo showing red high heels on a copy of the Quran.

Things are tense on Temple Mount, even more so than usual. Israeli police closed -- then partially reopened, then who knows what -- access to the holy site for Muslims following riots.

Some Ultra-Orthodox Jews in Jerusalem REALLY don’t want women to read from the Torah at the Western Wall. They made their position clear by attacking Jerusalem buses bearing ads that endorsed hosting bat mitzvahs at the site. The tire-slashing, stone-throwing fear mongers didn’t stop advocacy group Women of the Wall from hosting a sneaky bat mitzvah with a tiny Torah in tow. Way to show ‘em, ladies.

Hajj selfies! Because why not.

Ireland will finally hold a referendum to remove the crime of blasphemy from its constitution. Britain only did so in 2008, and seven other countries in the E.U. still make blasphemy illegal.

This made me laugh:

@brianpellot Majority of weight watchers want Danish banned. But why not let everyone choose for themselves.

Not sure if there’s a connection here, but Estonia, the world's least religious country, became the first ex-Soviet state to legalize gay marriage.

Some radical old dudes at the Vatican kinda sorta said gays and divorcées might kinda sorta be okay, then backpedaled like a doped up Tour de France team. So much for “reaching out to modern society.” Maybe in another hundred years they’ll arrive at 2014.

Caricaturing the Pope as a pedophile in France? Fine. Calling a professional comedian who is anti-Semitic a ‘professional anti-Semite’? Not so fine, but indictments are handed out like candy in France, so this might not be news.

In Britain, a man was sentenced to four weeks in jail for sending an anti-Semitic tweet to a Jewish member of parliament. Living in the Nanny State makes me miss the First Amendment, which protects terrible utterances as long as they aren’t imminently dangerous.

A Dutch student was suspended from school after he threatened to cut off Jews’ heads. Probably wise.

Americans are crazy, but at least they’re not burning "witches" alive, an alarmingly common occurrence in Tanzania.

Rwanda’s parliament is trying to ban the BBC over “genocide denial.” Auntie Beeb’s crime? Interviewing researchers who think the genocide was even deadlier than reported.

Here’s a must-read on how religiosity among other factors are influencing anti-LGBT legislation in some African countries and shaping the continent as a whole.

Finally, lest you forget, Boko Haram is still kidnapping women and girls.

On that happy note, have a great week. Be sure to sign up to receive my mood-lifting monthly parcel of joy. I know I know, it’s depressing, but it’s important. So just sign up.