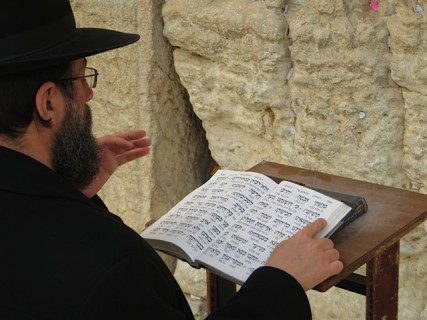 A man in front of the Western Wall in Jerusalem, February 2014. RNS Photo by Brian Pellot.

Last month’s Religious Freedom Recap centered around blasphemy and how the Charlie Hebdo attacks reverberated internationally. This month, rather than recapping a specific incident (Chapel Hill, Copenhagen, too many to choose from), let’s start with the global rise of anti-Semitism, move on to some sex-negative spats, then launch into the regular regional roundup.

More bad news for Jews. A new Pew Research Center study shows that while social hostilities involving religion decreased slightly in 2013, the number of countries where Jews face specific harassment reached a new high — 77 countries, 34 of them in Europe.

After the Hebdo-related attack on a kosher supermarket in January, hundreds of Jewish tombs were vandalized in Northern France last month. A similar attack on freedom of expression in Copenhagen was followed by an attack on the city’s main synagogue.

Germany launched a new commission on anti-Semitism, which might have gone down better if they’d bothered to include a Jew or two. With Berlin’s monthly Jewish magazine being delivered in plain envelopes and community leaders advising Jews against wearing skullcaps in “Muslim areas” out of fear, I’d say the commission is justified.

British police investigated a planned march against the “Jewification” of north London as news emerged that anti-Semitic incidents doubled between 2013 and 2014.

Taking the political pulse, Israeli PM Netanyahu is encouraging a mass migration of Jews from Europe. Thousands of European Jews made the move in 2013 and tens of thousands more are considering following suit, despite heads of European states pleading with them to stay put.

Europe’s not alone in making Jews feel unwelcome. In South Africa, where apartheid parallels are often applied to the Israeli-Palestinian conflict, student council members at a Durban university demanded that Jewish students who support Israel de-register from the school.

In the U.S., more than half of Jewish university students say they face anti-Semitism on campus.

The New York Times’ disapproval of a controversial and seldom practiced Orthodox/ultra-Orthodox ritual that’s killing babies in Brooklyn isn’t anti-Semitic as much as it’s a plea for “basic hygiene and common sense,” both things I tend to endorse.

A Valentine’s Month recap wouldn’t be complete without some sexy (and decidedly anti-sexy) snippets, for Christian Grey’s sake.

Saudi detained men for dancing at a birthday party because cake + dancing = gay.

Malaysia takes down political opponents by accusing them of sodomy,  then leveling criminal charges. It takes down teenage girls by threatening them with jail time for hugging pop stars. It takes itself down by living in the dark ages.

Yoga pants and shirtless men are too hot for this Montana Republican lawmaker to handle, so he wants them banned.

Are 8-year-old Catholic school girls in San Francisco having abortions? No.

Wood TV (actual name, I KNOW) reports that a man burned down a sex shop in Kalamazoo, Michigan, in an effort to “eliminate pornography from his neighborhood.” He should have gone for the Internet cables.

Enough about sex. Onto those regional reports. 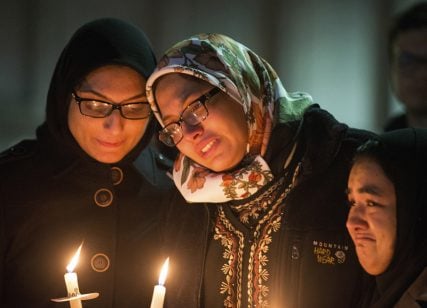 (RNS1-feb16) Students with lit candles attend a vigil on the campus of the University of North Carolina, for Deah Shaddy Barakat, his wife Yusor Mohammad and Yusor’s sister Razan Mohammad Abu-Salha who were killed in Chapel Hill, North Carolina February 11, 2015. Photo courtesy of REUTERS/Chris Keane

An atheist gunned down three young Muslims in Chapel Hill, North Carolina, allegedly over a parking spat. Were the respective beliefs of the gunman and his victims integral to the murder? Unclear. Was this petty “parking dispute” actually a hate crime? Difficult to prove. In any case, guns.

Gay marriage has gotten super complicated in Alabama and Oklahoma. Then this happened in Arkansas, and a New Jersey judge declared it illegal to call being gay a mental disorder.

Is there a Muslim living in the White House? No. Would the world end if yes? Still no.

Obama’s recent Crusades rhetoric didn’t go down well among a lot of American Christians. People who understand history were more receptive to his argument.

At long last, America has a new Ambassador-at-Large for Religious Freedom.

Climate change, evolution and vaccinations are widely accepted in Europe, so it’s funny to watch American conservatives dance around non-issues when traveling abroad.

Christians Against Dinosaurs…but I’m pretty sure the dinos would win in a cage fight. Speaking of which, Norwegian oil and gas company wants to bring dinosaurs back, I think? Please, someone, anyone — tell me what’s going on in this ad. 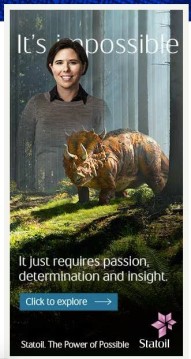 Republicans want Idaho to be a Christian Theocracy In Name Only (a TINO, if you will).

The Mormon Church continues to kick out subversive elements, which is fine from a religious freedom perspective. It just doesn’t look so great coming from an organization that claims to champion freedom of thought.

Islamophobe Pamela Geller launched a ‘Draw the Prophet’ contest in Texas. Iran then launched a Holocaust Cartoon Contest. I don’t really know what to say.

The Globe and Mail argues that Canada banning women who wear the niqab from becoming citizens is discriminatory, because it is.

Austria passed a very unfair bill that bans foreign funding for mosques and imams but looks the other way when money comes in for churches and synagogues. #doublestandard

German cities have this great tradition of creating satirical and provocative floats for their carnival parades. Cologne toned down its Charlie Hebdo float, but Düsseldorf went full speed ahead:

The U.K. banned “extremist” preachers from university campuses. Now it’s trying to figure out what that even means.

This statue of a crucified British pop star hanging from a Church of England parish church is controversial for its lack of controversy, I think.

FLESH BURQA, declares Vatican. Pope Francis also endorsed a failed referendum in Slovakia that would ban gay marriages and adoptions but said it’s OK to smack children as long as their dignity is maintained.

Russians are far more offended by cartoons that insult people’s religions than Americans seem to be. Not surprising then that a theater in Novosibirsk had to defend its artistic freedom after the city’s prosecutor’s office accused it of “offending religious feeling.”

This is sweet. More than 1,000 Muslims in Norway formed a protective ring around Oslo’s synagogue, showing solidarity after the recent spate of anti-Semitic attacks in Scandinavia and Europe more broadly.

“Secular Turkey” is a sham, as the government pledges to raise “pious generations” through a more Islam-focused education curriculum. Atheist, Alevi and other protesters opposed to the adoption of mandatory religion courses were met with…water cannons.

ISIS beheaded 21 Coptic Christians in Libya, kidnapped more than 100 men and boys in Iraq, and thuggishly smashed art at the Mosul Museum, among other atrocities. The terror network has also abducted more than 220 Christians in Syria.

YouTube is still banned in Pakistan, two years after that Innocence of Muslims debacle. Blasphemy laws continue to be used to settle social and political scores in the country. Little has changed.

Two women who dared to drive in Saudi Arabia were released from prison after being held for two months. That’s a slap on the wrist compared to the death penalty sentence a man received for renouncing his Muslim faith (well, and for hitting the Quran with a shoe).

An Egyptian student was sentenced to a year in prison for sharing his atheism on Facebook.

Boko Haram continues to terrorize Nigeria, leading the government to postpone upcoming presidential elections (or at least serving as a nice excuse to do so).

Another albino child was found dead in Tanzania, dismembered for the sake of black magic and witchcraft despite witchdoctors being banned in January. Four people were charged in the murder of an albino woman after six years of impunity, a promising sign that real changes could be underway.

Those cult members who murdered someone in a McDonald’s in China? China murdered them right back.

In typical Malaysian fashion, Malaysia banned its Christians from undertaking pilgrimages to Israel over “security concerns.”

Want to hear from Myanmar’s “Face of Buddhist Terror” Wirathu? Voila. The country has decided to revoke the identity cards of 1.1 million Rohingya Muslims, a move most international human rights groups condemned.

In neighboring Bangladesh, an American atheist blogger was hacked to death. And I lost all faith in humanity.

Ghosts are big business in Thailand.

Why are western tourists posing naked at Cambodia’s Angkor Wat (temple)? No really. Tell me. Why are they doing this? It’s unclear.

Indians are free to worship their prime minister, but he thinks it’s pretty weird. Actually, the Hindu PM thinks it’s “shocking and against India’s great traditions.”

Australia is embroiled in two sex abuse crises. One involves the Catholic Church, which apparently fought a sex abuse victim’s legal claims to discourage others from stepping forward. The other involves Melbournes’ Orthodox Jewish community after decades of sexual abuse against children emerged.

I’ll leave you with this must-read: The World’s Craziest Anti-Women Laws.

If you were expecting a silver-lining to all this madness, I apologize for the anticlimax. I’ll try to dig up some joyful gems for next month. Sign up below to receive next months’ recap by mail.