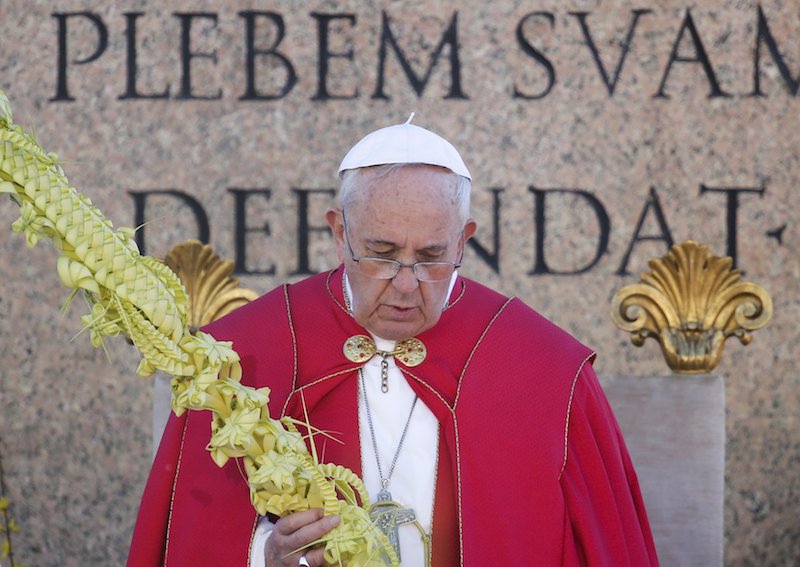 VATICAN CITY (Reuters) - Pope Francis led the world's Roman Catholics in Palm Sunday celebrations by paying tribute to those killed for their faith, a reference to the victims of Islamic State militants.

Francis, who earlier this month began the third year of his papacy, presided at a colorful procession in St. Peter's Square commemorating the day the Bible says people of Jerusalem welcomed Jesus days before he was crucified.

Thousands of people, including the 78-year-old Argentine pope and prelates dressed in red vestments, carried palm fronds and branches in St. Peter's Square on the day that marks the start of Holy Week, which ends on Easter Sunday.

In his homily during the Mass that followed, Francis, focused on the need for humility. Take Jesus' path, he said. "There can be no humility without humiliation... making room for God by stripping oneself, 'emptying oneself.'"

And he paid tribute to modern-day martyrs, killed for their faith, denouncing the killing of 21 Egyptian Coptic Christians by Islamic State militants in Libya.

"We think too of the humiliation endured by all those who, for their lives of fidelity to the Gospel, encounter discrimination and pay a personal price," he said, speaking in Italian.

"We think too of our brothers and sisters who are persecuted because they are Christians, the martyrs of our own time. There are many of them. They refuse to deny Jesus and they endure insult and injury with dignity," he said.

READ a 'Splainer on what makes a martyr

Francis has at times expressed alarm over the rise of Islamic State militants and the plight of Christians in the Middle East.

He has said that the international community would be justified in using military force as a last resort to stop "unjust aggression" but that it should not be up to a single nation to decide how to intervene in the conflict.

The coming week is one of the busiest in the liturgical calendar for the leader of the world's 1.2 billion Roman Catholics.

On Holy Thursday, he presides at two services, including one at a Rome prison where he will wash and kiss the feet of male and female inmates to commemorate Christ's gesture of humility towards his apostles on the night before he died.

Francis is the first pope to hold the foot-washing service outside a church and to include women and Muslims, which has upset conservative Catholics.

He presides at two Good Friday services, including a Via Crucis (Way of the Cross) procession around the Colosseum.

After celebrating Easter Eve and Easter Day Masses he delivers his "Urbi et Orbi" (to the city and the world) message.
(Reporting By Philip Pullella; editing by Susan Thomas)