A Fool and His Money - courtesy of David Goehring via Flickr
April 17, 2015
Boz Tchividjian

A couple of years ago, I had the distinct honor of meeting an individual who has literally committed his life to serving the abused and exposing the abusers.  David Clohessy is the executive director of SNAP (Survivors Network of those Abused by Priests) and has been an influential force in confronting the horrors of child sexual abuse within the Catholic Church and other faith communities.  He recently contacted me about a very disturbing situation coming out of a civil lawsuit in West Virginia involving a convicted sex offender.  We all need to take a minute to become informed about this disturbing case so that we can use our collective voices to bring an end to such judicial decisions that further traumatize victims. - Boz

Imagine a courthouse with two exits. One is used by 95% of those who leave the building. The other is reserved for those who say they were sexually violated as children and have filed civil lawsuits.

At the abuse victims’ exit, cashiers collect funds for two court-appointed lawyers, one who decide disputes about discovery, and the other who represents the convicted child molester.  Victims must pay half of the fees for both lawyers.

That’s no misprint. That’s no exaggeration.

In one child sexual abuse cover up case in West Virginia, this bizarre, hurtful and blatantly unfair situation is already happening. And it could spread across the state unless a West Virginia appeals court judge sides with vulnerable kids and wounded adults. He will have a chance to do so on April 22nd in Charleston, West Virginia.

Please notice that I’m not using words like “accused” and “accusers.” That’s because the child molester in this case, Christopher Michael Jensen, has been convicted and was sentenced in 2013 to up to 75 years in prison for sexually violating two boys -ages three and four.

That same year, families of 12 children who reported being abused by Jensen filed a civil suit against the Mormon church. It accuses Mormon officials of “sending emissaries from Salt Lake City to West Virginia to instruct witnesses not to talk with attorneys representing the children suing the church”. The suit also alleges these same church officials of trying “to intimidate the families (by) directing fellow church members to try to convince them to abandon their claims ‘lest they run afoul of church teachings regarding forgiveness,’" according to a newspaper story and the suit.

It is these same Mormon officials who sought benefit from and are exploiting the unfair legal process described above. Specifically, they asked that a “guardian ad litem” be appointed and given wide berth to represent the imprisoned perpetrator. In most jurisdictions, guardian ad litems are appointed to represent minor victims, not convicted sex offenders!

Again, the victims are to pay one-half of each of these guardian ad litem’s fees. This basically forces victims to pay each time they want a decision on motions to move the case forward. And it forces them to essentially pay 50% of the defense costs for an already convicted child molester. In monitoring clergy sex abuse and cover up cases for 25 years, we’ve never seen anything like this. 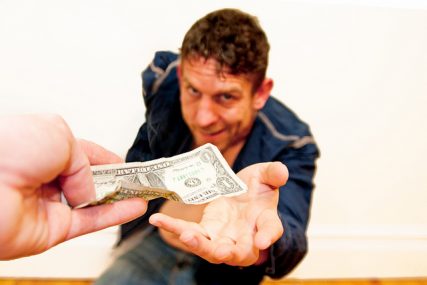 A Fool and His Money - courtesy of David Goehring via Flickr

Two private West Virginia lawyers were tapped for these seemingly unnecessary positions. Before it’s all over, they may well earn hundreds of thousands of dollars from taxpayers for these roles.

As the victims allege in their latest court filing, “the result of this procedure is that virtually the entire judicial function has been delegated to (these private attorneys) and when combined with the order on the Guaridian Ad Litem issue, Plaintiffs “are being ordered to pay significant sums of money to get their motions heard and decided in their case involving a church member who sexually abused children.

These type of defensive tactics are not new. We’ve seen officials in many faith communities use similar tactics in the past. in fact, there is a nickname for this hard-ball approach: the “Triple D” strategy, or “delay, discourage and deter.”

In my opinion, faith community leaders hope that by seeking special treatment like this from police, prosecutors or judges, they will be able to:

Though this type of defensive behavior is nothing new, I’ve never seen institutional defendants – churches, schools, athletic leagues or other organizations – be as aggressive as what is being done in this West Virginia case. I certainly haven’t seen such callous tactics like these used in a case where the criminal actions are so clearly documented.

Sadly, faith communities are not strangers to employing tactics that promote delay, discourage, and deter. Some examples:

In most of these cases, the defendants either lost in court or settled the cases. Unfortunately, the defendant (Mormon Church) in the pending  Jensen case seems to be winning.

Those who commit and conceal child sex crimes often use whatever legal maneuvers, loopholes and stratagems their clever lawyers can devise while at the same time purporting to be “caring shepherds.” Sometimes they win, sometimes they’ll lose.

Those who care about kids must at the very least expose corrupt or callous tactics by those who profess to be “men of God” and who intentionally frighten or discourage child sex abuse victims from exposing criminals in court.

David Clohessy of St. Louis is the director of SNAP, the Survivors Network of those Abused by Priests. He can be reached at [email protected]

Related Posts
By Kathryn Post
God is Grey's Brenda Davies receives cease and desist from Christian parenting experts
By Adelle M. Banks
Suit alleges Southern Baptist church’s negligence led to abuse of teen
By Alejandra Molina
Four young people of different faiths move into a home together, then a pandemic happens
By Jeffrey Salkin
Warning: Your piety might be dangerous to your health
By Bob Smietana
Can a bestselling Christian marriage book about love and respect lead to abuse?