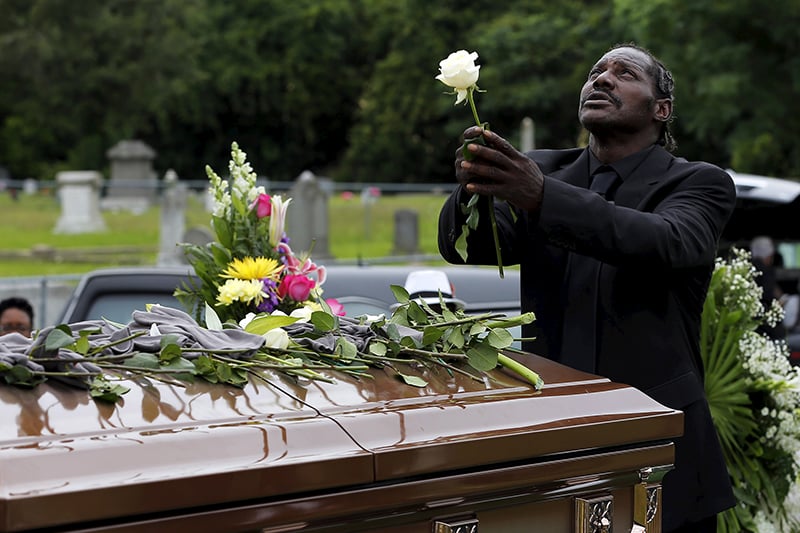 Gary Washington stands over the casket of his mother, Ethel Lance, as she is buried at the Emanuel African Methodist Episcopal Church cemetery in North Charleston, S. C., on June 25, 2015. Lance is one of the nine victims of the mass shooting at the Emanuel African Methodist Episcopal Church. Photo courtesy of REUTERS/Brian Snyder
*Editors: This photo may only be republished with RNS-BLACK-LIVES, originally transmitted on August 7, 2015.

(RNS) When news broke of the killing of Michael Brown in Ferguson, Mo., a year ago (Aug. 9, 2014), St. Louis seminary professor Leah Gunning Francis felt she couldn’t just sit quietly. She joined in the marches, the prayers and the vigils.

After Tamir Rice was shot and killed by a Cleveland police officer, Agnes Scott College religious studies professor Jan Willis turned to her Buddhist exercises and wrote a column called “Why We Can’t Breathe.”

And following the fatal shootings of nine African-Americans at a church in Charleston, S.C., in which a white gunman has been charged, Christian activist Bree Newsome climbed a flagpole at the Capitol and took down the Confederate flag. As the “Black Lives Matter” movement has grown, it has been accompanied by practical theologies of people who feel called to act on their faith in pursuit of racial justice, said Gunning Francis, author of the new book “Ferguson & Faith: Sparking Leadership & Awakening Community.”

“The way I understand theology to emerge out of the Black Lives Matter movement is that it embodies an understanding that black people are created in the image of God,” said Gunning Francis, associate dean of contextual education at Eden Theological Seminary in St. Louis. Members of the community hold hands in front of police officers in riot gear outside a recently looted and burned CVS store in Baltimore, Md., on April 28, 2015. Photo courtesy of REUTERS/Jim Bourg Editor: This photo may only be republished with RNS-BLACK-LIVES, originally transmitted on August 7, 2015.

But the racial focus leads to “universal consequences,” he said, such as police cameras that may benefit everyone.

Although experts say much of the Black Lives Matter movement is secular in nature, some talked about it in theological language.

“If ‘Black Lives Matters’ is a word, than Ferguson is a word made flesh,” said the Rev. Osagyefo Sekou, a fellow of the Fellowship of Reconciliation and a St. Louis-born theologian on an April panel on “Ferguson & Faith in the 21st Century.”

READ: Q & A: From Ferguson to Baltimore, black America’s faith is tested

A group of 31 African-American deans and presidents of theological schools used the holiday honoring the Rev. Martin Luther King Jr. to write an open letter urging their divinity school colleagues to “arise from the embers of silence and speak up and speak out … by responding in your own particular context to our theological call to action with curricular programs, public forums, teach-ins, calls to your congressional leaders, writing op-ed pieces, and more.” “How can we continue with business as usual in our theological schools in the midst of so many egregious injustices?” they asked.

The Rev. Michael McBride, leader of the “Live Free Campaign” of PICO National Network, said institutions from Fuller Theological Seminary in Pasadena, Calif., to Union Theological Seminary in New York have scheduled classes and programs this year “that led seminarians and graduate students into a deeper conversation about white supremacy, about racism, and about the role and the call of the church to resist both of these forces of evil.”

His network has worked with African-American and evangelical coalitions to create a curriculum and sermon series to foster discussions with upcoming screenings of the documentary “3 1/2 minutes, Ten Bullets” about Jordan Davis, who was shot dead in Jacksonville, Fla., in 2012. They include lessons in which participants can “name and lament implicit bias” and view justice as “not an optional thing for those who follow Christ.”

Although much of the theological discussion around the “Black Lives Matter” sentiment is in Christian circles, it has an interfaith dimension.

Willis, who was raised in a black Baptist church and marched in the Birmingham, Ala., Children’s Crusade with King in 1963, wrote a second column called “We Cry Out for Justice,” that drew on her Tibetan Buddhist practices.

Willis said the Black Lives Matter movement is this generation’s attempt to realize King’s theology of a “beloved community” that maintained that international standards of human decency will not allow poverty and injustice.

Although the civil rights and Black Lives Matter movements are different — in part because of the role of social media today — Gunning Francis said there are parallels between them.

“Both of these movements are formed out of the inhumane treatment of black people and the fight to be treated as fully human,” she said.

Gunning Francis found as she interviewed clergy and young activists in the St. Louis area that a “theology and ethic of love” drove their actions.