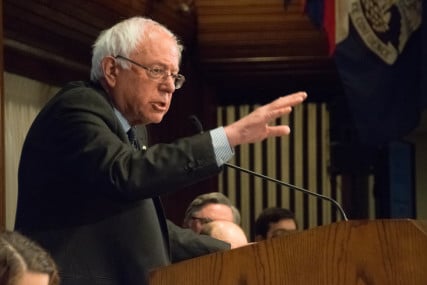 Senator Bernie Sanders is the only Jew who is running for president.

What might that mean — both to him, and to the Jewish community?

Sadly, the rally was not re-scheduled.

My friend and colleague, Rabbi Fred Guttman of Temple Emanuel, invited Senator Sanders to join him at his home for Rosh Ha Shanah dinner, but Sanders was not able to rearrange his schedule.

Second, Bernie Sanders spent the first day of Rosh Ha Shanah at Liberty University, the fundamentalist college that was founded by the late Jerry Falwell.

He delivered an impassioned speech to a crowd that was not accustomed to hearing his liberal message (though you might be surprised at the applause he got on several points). He spoke about civil dialogue, and building bridges. He quoted Matthew and the prophet Amos.

But, did he have to do it on Rosh Ha Shanah? And, by the way, serious Christians respect Jews who care about their own faith. Just saying…

Senator Sanders has serious Jewish “street cred.” He grew up in Brooklyn. He worked on a kibbutz in Israel.

But, for all of his Jewish identification, Bernie says that he is “not particularly religious.”

OK. Not every Jewish candidate is former Senator Joseph P. Lieberman, who was Al Gore’s vice-presidential running mate, and an observant Jew.

Bernie Sanders identifies himself as “culturally Jewish.” But so does the newly-elected chair of J Street U, a Muslim girl named Amna Farooqi, because she has so many Jewish friends.

If my grandfather had said that he was a cultural Jew, it would have meant that he read Jewish newspapers, went to the Jewish theater, and read Jewish books.

In other words, there would have been some serious content there — not just short hand for “doesn’t care about Judaism as a religion.”

Besides, even non-religious Jews can show some sensitivity to other Jews, and avoid flaunting their public disregard for Judaism, especially during the most sacred season of the year.

(Sandy Koufax wasn’t exactly an observant Jew. Yet, fifty years ago, he attended Yom Kippur services rather than pitch in the World Series. Where have you gone, Sandy Koufax?)

This gets worse than simply blowing off Rosh Ha Shanah.

This past week, in Great Britain, Jeremy Corbyn won the election to be the next head of the Labor Party.

These are Jeremy Corbyn’s friends and associates:

Jeremy Corbyn apparently has another friend.

That would be Senator Bernie Sanders.

Sanders hailed Corbyn’s election as a promising development in the global fight against inequality.

First, Sanders sits out Rosh Ha Shanah, preferring to have a rally and making an appearance a Liberty University.

Then, he goes out of his way to yell a “cross the pond” mazal tov to someone who, while we cannot know if he is an actual Jew-hater, certainly hangs out with more than his share of them.

Bernie Sanders is true to his roots. That would be the Jewish Socialist tradition — birthed in eastern Europe, exported to the Lower East Side and other urban centers, a rich wellspring of Yiddish culture (including the Forward, nee Forvertz) — and the founding political and social ideology of the State of Israel.

But Jewish socialists (both in the USA and Israel)  were anti-religious. In New York and other cities, they held Yom Kippur balls as a way of thumbing their noses at religious Jews. They proudly proclaimed that they were “at war with God.”

That seems to be Bernie Sanders’ Judaism. It would explain his affection for Jeremy Corbyn, who like Sanders, is a democratic socialist.

Bernie Sanders still has eight days to decide how he will spend Yom Kippur.

He still has time to repent for reaching out to Jeremy Corbyn — and well he should, for we are judged by the ideological company that we keep.

Bernie, a socialist, surely knows the old union hymn: “Which side are you on?”

Bernie Sanders should answer that question.

Bernie Sanders should publicly disavow his admiration for Jeremy Corbyn.

Bernie, which side are you on?

Shanah tova to all!